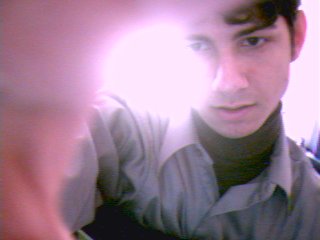 It’s not such an unusual mix of stubborn and proud, but it has interesting caving in points. Skip long elaborate post. I have finished the futon, which is apparently a work of some legend and repute around these parts. And, now, comes sleep.

She let just a dash of irony enter into it. “It’s his, you know.” As if she would keep such a well read copy of Lolita on her bookshelf entirely for the show of it. Even if i had forgotten, it was an easy path to retread: now an English major, then he was fixated on Stanley Kubrick — whose choice in novels turns her stomach in an entirely routine fashion. She’s seen most of them, courtesy of him, parts of which were presumably glimpsed from between fingers pressed over her eyes at the end of the first vignette of Jacket or at any point during the absolute horror of Clockwork (which i refuse to acknowledge as having ever been entered onto film).

I said something intelligent about him once. Kubrick, not the ex. Something about him choosing material that rendered his characters as objects… everything objectified. Lolita is exactly that, so far, and is entirely engrossing in its droll way — though i keep inserting graphic pictures for Humbert’s coy phrases. Slowly the story unfolds as the pitiful nymphophile is slipped into the world of the succulent young Lolita, and suddenly each page grips you as the narrator tries his best to stay satisfied by her charm alone. The tension is dense and sinewed as your literary mind sides with an otherwise likable narrator by force of habit while some other part of you is retching at the outcome that seems to be drawing inexorably near. What author could get so tangled up in the thread that his character drew along behind him like a clever spider that he could weave it so effectively, so that you are rooting for that old bitch of a mother to die and for those tiny sleeping pills to take their inexorable hold on the unsuspecting child sooner rather than later?


Rather than spoil the midpoint of the book for you, i’ll only foreshadow by saying that while you don’t always get what you want, sometimes getting what you thought you thought you needed is in fact not in your best interests… especially because it extinguishes any concept of want at all.

I don’t think it’s a very good book. Yet. Though, i have some hopes of escaping the especially dull clutches of the middle section any minute now. Maybe i won’t like it, though… maybe that’s why she’s dating me instead of him.

Definitely a rare occasion that i wake up at eight thirty and don’t want to go back to sleep.

I don’t know what possessed me to buy twenty dollars worth of cookies, although i suspect my body was dangerously short on sugar and somehow twisted my brain’s arm when i turned the corner into the snack aisle. The bags are just sitting in the middle of my room, now, still more than a housecat’s weight in cookies despite eating them for breakfast and dinner.

Walking to the recording studio earlier that day a ladybug alit on my guitar case and stubbornly clung there for nearly a mile until it flitted off into the midst of a pickup football game that seemed to involve three separate teams using two balls to cross a field in perpendicular directions. Later that day i lent a hand to writing a perfectly respectable R&B song, and i would like to sell it to a former member of Destiny’s Child, as i don’t have any use for it.

Just in case you really needed a reason for my prolonged absence, i just got two perfect scores on two consecutive term papers. In fact, i suspect that has little or no correlation to my avoidance of personal publishing and, if anything, made writing the papers even more challenging. Otherwise, I’ve listened to Scarlet’s Walk about four times more than you read my last post about it. That’s about it.