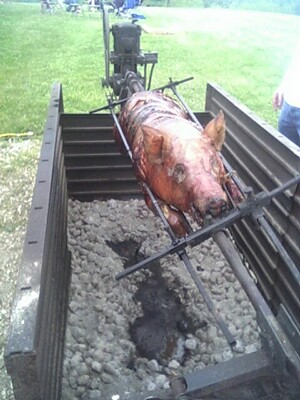 The Lord of the Flies says “I’m part of you…We’re going to have fun on this island.” 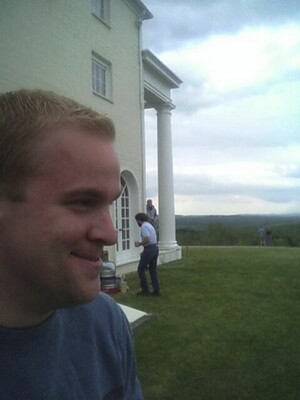 I think Ross is smiling because we are partying at an awesome mansion. If you need me, i’ll be on the balcony overlooking the ballroom…

Maps – Playing with new toys – stomp distortion for guitar, and compression to keep it at a constant level. Oh, and singing like a girl, but i’ve always done that.

The point isn’t really that I have to wear in some new callouses by Saturday so that I can make it through the four sets I’m playing on, but that my callouses grew. Thickened.

I’ve been playing guitar for eight years at the end of this month. I remember when I had been playing for two and a half years, and I would watch Anthony, who has two years of playing over me, and think “Wow, look what I’ll be able to do in two years.”

And, well, maybe I can do some of the things Anthony’s done now. Who knows? I realized that the path is not linear, and it’s not parallel to anyone else’s. Early on I learned how to churn out chunky, thumping chords, Ani-fying any song in an attempt to make it my own. Just now I am learning the strength of learning something note for note, rhythm for rhythm. Isn’t that backwards? Don’t most people play along to the disc first and then figure out their own way to do it? That’s what I’ve been told, anyhow.

On the scale of great I’m sure I hardly rank – plenty of practice left on that front, no disputing that. But, not only can I get better, but even with as much playing as I’ve done, there are new callouses to be made.

I am always more the rock star when I draw blood, and last night was excruciating. After a week of practice had thickened my skin to new levels of callousness i spent the day nervously picking at these foreign fingertips, leaving them as naked and vulnerable as a tiny baby’s for my rehearsal with Dante. Our first time through “Volcano Girls” I winced and dropped the tempo, eventually giving in and playing the chords as a sevenths to rest my battered pinky.

“Bucket Seat” solved the problem, though, so fun to play, and with drums! Real, live drums, doing what I’d imagine they’d do – propelling me into choruses and matching my crescendos. And, after, inevitably after my spirited performance, I found that I had drawn blood.

I think it was the turning point in the rehearsal, really. Everything rocked more after that. Saturday at the party I’ll have nearly half an hour of rehearsed(!) set, with drumming(!) throughout. For most of the guests it will just be background noise; for me, a little victory.

Does FedEx ever *not* come while i am half-naked or in the bathroom?

Or, do i just spend an inordinate amount of time half-naked or in the bathroom?