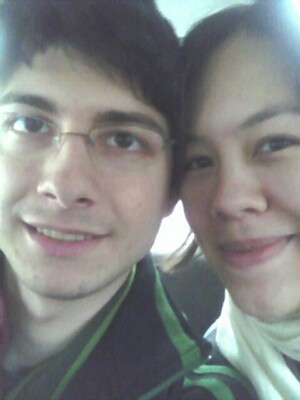 An interesting – if too brief – article in a recent Wired (to which my subscription briefly lapsed) dispenses some basic knowledge on Absinthe. As myth tends to outweigh experience when it comes to this particular drink, the link seemed worth passing along.

After some amount of searching through substandard website, and armed with information from the article, i would humbly suggest Absinthe Online as one of the more credible sites for your potential purchase. Jade Liqueurs is the signature brand of interviewee Ted Breaux – the “Nouvelle-Orleans” is mentioned as being one of the superiorly rated absinthes available.

I am ever so slightly turning into my aunt, who would leave the heat turned low on even the most frigid of days. It’s not about saving money (though, with the Philly gas price hike, it should be) so much as it is about human endurance.

I can endure my house at 57 degrees in a light jacket and jeans and stay quite comfortable. Is my quality of life going to rise commeasurately with the temperature if i eek it up a mere 10 degrees to 67? Or, if i plunge myself into debt to attain a summery 70 or 71? Will i have acheived a perfect state of bliss if i can wonder around in shorts, eating ice cream without threatening to shiver myself off of the sofa?

Today Elise’s step-sister came through Philadelphia with a college friend from Oregon. The two of them snatched me up on my street as i arrived home from work, before i could get my key in the door. We did a sort of remedial tour of Philadelphia landmarks under Broad street, which included a trip to the Liberty Bell and Independence Hall.

I was hesitant to join them at first, being the jaded Philadelphia lifer that I am, but there was something special about being in those places so nearly empty – without the school kids that usually pack them full. Somehow it seemed more real to walk inside from the cold to these empty, echoing rooms wondering which of our founding fires got to sit the closest to the fireplace. Because, if the day was cold, the Continental Congress certainly would be – there’s not too much to those walls.

That thought sustained my negligence of our heater through the evening, but it hasn’t carried me through to fitful sleep. Our bedroom, an addition to the house, hangs precipitously over our back door, my side of the bed exposed to the bitter elements on five sides. Even at my most endurant iron-man moment my resolve to avoid using our heat evaporates upon entry into the bedroom – especially without Elise and her heating pad to huddle up against to osmose some warmth.

It is wooshing now, up from the basement and through snaking ducts, making its way into the frigid bedroom in a futile attempt to ward off the cold surrounding our bed from almost every side. Not futile because it won’t get warm, mind you, but futile because i am much more likely to fall asleep on the couch while watching a movie than to wait until the bedroom gets warm before going to sleep.

I’m sure Ben Franklin had much heavier pajamas than me, anyhow. 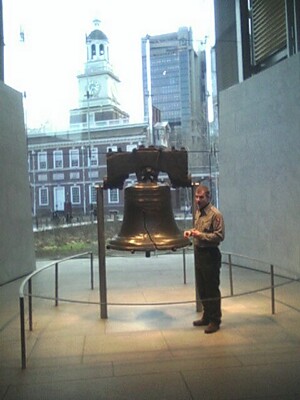 Who knew lib bell would be so deserted 3 days before xmas? 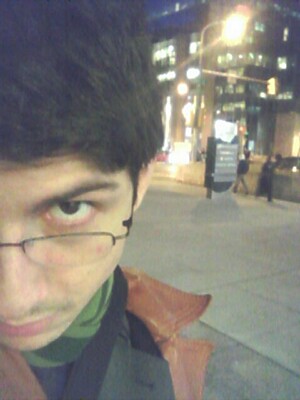 I did it. I finally broke the seal. I got an Express credit card. I know, i know, it only means trouble. Trouble, debt, tight jeans, and hot reversible belts.

It really started out with the suit i bought at Express last month. At the time it was a desperation buy – i needed a new suit jacket, and i needed to locate it in a two hour span. I had no idea that Express suit jackets would fit me as if they were personally tailored… comparing it to the two other suits i have owned is like holding an undershirt up next to a knit poncho.

Although i’ve had it for over a month, i hadn’t worn the suit all in one piece – the jacket showed up with jeans, and the pants made an appearance at work, but i hadn’t combined the two in a real world environment until I finally wore it for an offsite meeting yesterday. Needless to say, i looked as sharp as a tack.

While admiring my sharp-as-hell self in a bathroom mirror, i began to ponder: Do i look this sharp all of the time? I pride myself on it when i go to bars, or attend parties, but not at work – where i spend the most time and where it matters the most. Most of my dress clothes wardrobe was cobbled together from co-op to co-op between 2001 and 2004, with just a few shirts added this year. The assortment features few spectacular outfits, but it isn’t especially interchangeable – too often all of my clean shirts hinge on being worn with a single pair of pants. The result is that at work i often look just as random and dumpy as an intern, my more evolved sense of style smothered underneath unfortunate color combinations and fabrics subjected to too many cycles in laundromat dryers.

I decided then and there (still admiring myself in the bathroom) that if i wanted to maintain my reputation as fashonista i had to aggressively defend my title. No more pants that are too old to hold a sharp crease. More shirts that match more pairs of pants. More incredibly sexy suit jackets. I spend over a third of my waking life working for a living and, by god, i can use that livelihood to make myself sharp while doing it.

Thus, tonight i traveled to Express. My stated purpose was buying just one more suit jacket so i didn’t proceed to wear the other into the ground. One suit jacket turned into one new suits and, after discovering that they were priced at 50%, one new suit turned to two plus complementary ties. After the better part of an hour i realized that the dreadful day i had always always known would come had arrived – my Express purchase was so large that the discount that opening an Express credit card would provide could not sanely be denied.

At this point my impending purchases had become voluminous enough that I had acquired a specific helper employee to help me shuttle it to and fro the register, and to tell me i looked hot. I queried, “Would it be really good for you if i opened a credit card?,” and her eyes lit up like high beams.

And, well, long story short is that I have a ridiculously high credit limit at Express (my helper let out a gasp when she saw it), i got a free-suit’s worth of discount, i made Jennifer’s eyes light up like high beams, and i now have an entirely new dress wardrobe including major support in the BIV division of my RGB spectrum. If i can’t manage to look sharp now i have nothing to blame other than bad fashion sense.