I’ve always been fascinated by the idea of National Novel Writing Month (NaNoWriMo), because prior to this incarnation of songwriter-Peter there was a lengthy iteration of fictionwriter-Peter who always was slaving away at the concept for a book or two.

Those days of thinking in character motivations and complete sentences have been eclipsed by chord changes and internal rhyme, and every November when NaNoWriMo comes around I wistfully browse its website, wishing that I could have that high school inspiration back for just a month to churn out a completed novel.

I’d also like to be able to fit into my vinyl pants from high school. We should all have dreams.

Since my novel-writing days would seem to be over, or at least on long-term suspension, I was intrigued by the idea of a parallel National Blog Posting Month (NaBloPoMo), which I found on Fussy roundaboutly via Dooce. NaBloPoMo doesn’t really roll of the tongue like NaNoWriMo, so I have for-short deemed it “Nablo,” if only because “Namblo” just made me think of half of “Rambo” and half of “Nambla”, which as a combined thought was not an entirely pleasant experience.

I might not be able to plot a book liked I used to, but surely I can supply meaningless blather as good as I ever did? I mean, lest we forget, I was the #1 Power Blogger on the entire freaking internet on several occasions, and I Blogathoned 48 posts in 24 hours every summer for three years running. (not to mention I remain the longest running Philly Blogger, and the originator of a singer/songwriter “podcast,” but I digress).

So, here we are on the threshold of November, and I’m going to attempt to make an entry for each day of the month. Some of the entries might be photos, or songs, but somehow, someway, we’re going to make it through this, gentle reader. Somehow.

Okay, maybe I was supposed to remember this from biology or from the little clear-plastic visible woman I put together when I was eight that came complete with detatchable pregnant belly. If so, I apologize for my general scientific truancy.

If a woman has very defined abs and she gets pregnant, where do the abs go? Are they behind the belly, still intact? Does the belly dissolve the abs?

You have to realize that i’ve hardly known any pregnant people in my life. All of my aunts got pregnant in the same year, in which i recall seeing them only sparingly, and i’ve had one pregnant friend who i didn’t have an entire conversation with for the length of her pregnancy. I am operating on a deficit of facts here. The Internets and The Google have yet to come through for me.

This one is slightly less embarrasing then when, at age eight, I asked how a mommy pees when she is giving birth since she’s somewhat busy down there at the time.

Yeah, I was pretty precocious, wasn’t I? No cabbage patches and storks for me, I was already trying to understand the points of vaginal multi-tasking. 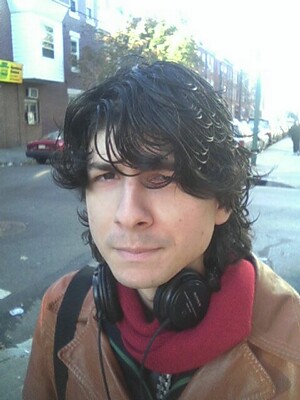 Hair is cute. More importantly, a great example of the sorts of faces i make when not preening for a self pic.

Listening to random underplayed songs at work I thought I was listening to a heretofore unheard live track of one of my favorite songs, but it was actually me singing it! I didn’t even realize until I picked up my iPod and saw my face on the album cover.

Alright, alright, if you insist: It was Candy Says, from Blogathon 2003. A little buzzy at full volume, but played quietly on work speakers it’s perfect.

My headache began a few days ago as a pair of too-wide yawns. The first flexed the right side of my jaw a little too far, and with the second there was a slightly audible crackle of bones being uncooperative. “Stop trying to unhinge your Jaw,” Elise said, “you don’t have to eat those rabbits all in one piece.”

Yes, my girlfriend is amusing.

The ache persisted for a few days, and by last night it was on the move – the pain slithered in to my mouth, up to my temple, and down the side of my neck. The ache became the headache, which in turn became one of the top three worst headaches of my life. (Another is here).

The headache is so persistent and distinct that I feel as though it is some separate entity – a symbiote – inflicting its will on me. It is like Spidey’s black suit, attached to me at the jaw, trying to envelop my entire head so that it can control my brain.

For sanity’s sake, I have named it. Meet my headache, Richard. You can call it Rick for short.

This is an important distinction for me: I am not my pain, and visa versa. I refuse to walk into work defined by a headache, or anything else, for that matter. On the outside I am committed to being my same vivid self, no matter the interior conditions.

(I would compare this to stepping onto the stage, but that analogy has the negative connotation attached to it from the time I tried to sublimate my 103 fever for a dress rehearsal but wound up with Bronchitis and Pneumonia. Because, you see, a fever is not just a symptom, it’s a condition, and you are your conditions.)

I’ve been surrounded by lots of headache sufferers in my life – a certain ex convinced it could be a brain tumor, and two former bosses whose headaches increased sensitivity to light and destroyed appetites.

My thinking on the matter is that pain is just a perception – just another sense. And, in the same way you can tune out a droning noise or adapt to a familiar smell, you can work your perception around pain. Certainly, some pain is of a source and magnitude much too high to ignore; after all, you can’t exactly tune out a jackhammer.

Richard will not be reaching jackhammer significance in my life. Because, unless some part of my is cracked or broken or abcessed, Rick is just an illusion of my perception. I can tune out Richard just like screening a call. He could just be an itch, or a tickle, or a gnat.

Richard has no magnitude because, there is no Richard. He’s just a yawn that got too wide. As easily as he interrupted my sleep and made me late for work he is banished back into the ether from whence he came.

Well, it took nine years, but i officially have learned my second guitar solo. I can even play it along with the record (with mild ad-lib).

Of course, now that it’s all learned i just watched a video of it being played and part of it is in a different position. Fucking Hal Leonard and their Authentic Transcriptions can kiss my authentic transcriptionist ass, i knew their tab was too easy to be true.

I swear, if i ever get popular enough to warrant a sheet music book it’s going to have full standard notation of all music and vocals, complete guitar tab, and piano arrangements for every song – all approved by me. I’ll arrange it all myself if i have to. You know, just like the Dresden Dolls book (which is amazing).