When I’m being overly fussy about anything musical, I have a special mantra I use to get focused. It goes like this:

What would Madonna do? 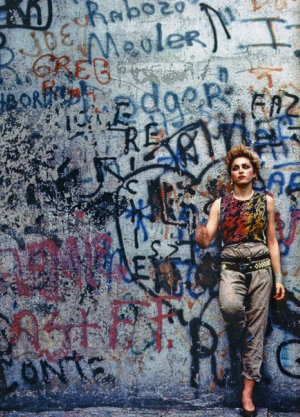 Last night I was not feeling musical. I was tired. My right arm felt flabby, and wasn’t keeping up with the quick, hard strikes on “Regenerate.” My breath-support was wobbly, and not getting me through “Shake It Off.”

I had promised to stop by an open mic, but I wasn’t feeling it.

In 1982, when Mad was still being labeled a one-hit wonder, she told Dick Clark, “I wanna rule the world.”

It was a lofty, laughable goal for a potential one-hit wonder to have in 1982, but she’s come as close to achieving it as any entertaining non-dictator could ever come. Her rule-the-world mission drove her every decision for over a quarter of a century. If you start counting from when she started playing in New York bands, she’s been driven as long as I’ve been alive.

Of course, Madonna is also known as a control freak and a perfectionist – but that didn’t stop her from breaking into clubs as an imperfect singer in the early 80s.

If she stayed home she couldn’t rule the world.

I take that as a lesson – not only from Madonna, but from all of my favorite paradigm-changing artists. From David Bowie to Ani DiFranco to Lady Gaga, what they have in common isn’t their talent and training. Their commonality is wanting it bad. Tenacity.

That’s a clarity of vision I lack. If voice, arm, and body are all tired, I want to pack it in. My songs don’t sound focused. Why play, I ponder, if I’m not at my best?

WMMD? I know what Madonna would do. What about Gaga, or Ani, or my glam idol himself?

David Bowie struck out as a pop star, actually became a one-hit wonder twice – on a novelty single, and again on “Space Oddity” (another novelty single, you could argue). He released two largely-unheard discs before he unearthed Ziggy from his collection of personalities.

WWDBD? He wrote one of his finest discs, Hunky Dory, and when its popular reception was soft he went directly back into the studio to record The Rise and Fall of Ziggy Stardust and the Spiders From Mars, one of my three favorite albums of all time.

So on those nights where I feel tired, or tuneless, or lazy, what should I do if I truly care about music as much as I claim I do?

Go out and play.