This is a story about rewards. Sort of. I’m not sure how to tell it, so I’ll just start at the beginning.

A little over a year ago I met Britt Miller – comm professional, digital native, and visual artist. Once Britt learned about my blogging she egged me into using Twitter. The rest, as we are accustomed to saying, is history.

It’s frigging crazy-ass history, actually. Playing streaming concerts, jumping out of planes, accepting awards, attending conferences in NYC – all of that borne out of Britt’s pestering me to get to know Twitter. 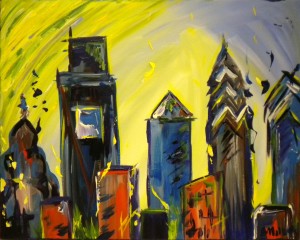 The two of us now share a “Fame 2010” plan of promoting and improving our respective arts all year. Last April, before all of that happened, Britt mentioned she was showing her art at the first ever “Earth Saturday” block party on South Street – an eco-friendly festival thrown by Big Green Earth Store and Whole Foods.

I asked Britt if she wanted some music to go with her art and the end result was that I wound up playing a block party along with some of my local favorites like Christie Lenee and Dante Bucci.

It was my first solo appearance in a long while, and it surprised me – even in the limitless space of an outdoor gig my songs felt big and sure, with just a few stumbles. It wound up being a major force in getting me into shape for playing and recording more than ever in the rest of 2009.

This past Saturday was the second Earth Saturday block party, again at 9th and South, and again featuring art from both Britt and I. My set felt even bigger and surer this year, and Britt had a table of beautiful prints of her art – major Fame 2010 success!

Britt is always pulling hilarious quotes of mine out of thin air, and before my set she had a great one. We were chatting with some twitter friends about my songwriting, and I made my usual disclaimer that it’s taken me a long time and a lot of work to get to where I am now – from being forbidden to sing in my high school halls to playing sets at eco-festivals. And, Britt said:

Peter, you said this awesome thing once. I heard someone tell you that you were a great singer, and you said, “Thank you. I’ve worked for thirteen years to hear that compliment.”

I don’t even remember saying that, but it’s indelibly me. To hear someone compliment me on my voice or my songs strikes me with awe – awe at what I’m hearing, and awe that nearly half a life of effort means I’m able to play music that people enjoy.

I wish I could take that feeling and transport it back to 15-year-old me, plucking out the strains of “Dilate” on his first guitar almost this very day in 1997.

Failing that, I’m sharing it with you. I hope you have something in your life that makes you as happy as my music makes me, and Britt’s paintings make her – especially when someone else stops to appreciate them.

END_OF_DOCUMENT_TOKEN_TO_BE_REPLACED

My best and most blog-worthy tweets of the last week:

I'm happy that you are all reminding me that narcissism isn't fun if you can't walk anywhere to be seen looking pretty. #

"The half-life of [the avg] tweet is 4mins," in terms of people interacting w/them. Consider in promoting links, products, content. #140conf #
@wfenza just like radioactive isotopes – falloff continues to approach 0 value over time. 50% of the value of tweets is in the first 4mins. in reply to wfenza #

@wockerjabby “When we passed the notes the teachers collected them, when they pass notes the world sees it.” #140conf #

“People talk about ROI, return on investment – throw that shit away. I talk to executives about, 'what's your return on ignoring?'” #140conf #

#140conf @jw: a truck @sxsw gave away a free taco for each @gowalla checkin, sold 12 for each they gave away! "Flashmobbed their own truck!" #

Staff for @twelpforce were sourced from participants on their internal social network. (Huge point; may blog on it later) #140conf #

"The role of journalists and editors now is to form [news] into a piece of narrative and inform." #140conf #

Only at #140conf could I wind up kidnapped in a car full of twitter-friends / strangers listening to Jay-Z on the way to an after-party. #

I would just like to point out that I was asking "WWMD?" way before Glee: http://bit.ly/9duIEf (That's, "What Would Madonna Do?") #

Apparently I was retweeted by @mchammer the other day. Twitter has made my life surreal. #

The power of "hello" – @MOgulnick said hi to me in line on day 1 of #140conf and we wound up sitting & lunching together the entire time! #
& proving everyone is a character: @MOgulnick is a sports fanatic & the new media strategist behind @HVRenegades, the Tampa Ray's SS-A team! #

All of my tweets (minus some @-replies) are hidden below, mostly for my own reference. Some highlighted topics/conversations you might want to browse include:

The #140conf was a lot to absorb in just two days – over a hundred speakers across dozens of talks. I took copious notes to aid my absorption, many of which found their way onto the blog.

As I captured my minute-by-minute notes, I realized that organizer Jeff Pulver didn’t put together a mix tape of information – he composed a symphony. The major themes that emerged were developed, transposed, restated, and transformed by an orchestra of characters on the stage.

I’ve recapped those five major themes below. If you attended (or watched online), do you agree that these ideas were prevalent and consisten?

Did you also hear other prevailing melodies in the symphony? If so, what were they?

1. Twitter has proven its power as a instrument of change on both the macro and micro levels.
Over the course of the conference we heard about single people freed from rubble in Haiti and entire nations where governments were held accountable for their actions (including our own!). When it comes to changing our world, Twitter has moved past the proof-of-concept stage.

2. Education must become digitally native and socially connected.
Every day that parents and educators rely on the existing pedagogic paradigm and ignore the ubiquity of social technology in the lives of our students is a day they are under-serving them. This isn’t a change that is constrained by the digital divide – kids in Tanzania learned socially on the playground!

3. Journalism is not dead, but it’s undergoing a metamorphosis.
In a world of countless citizen reporters we need still journalists and editors to help us locate the underexposed stories and shape them into coherent, impactful narratives. If anything, journalists have more power than ever to expose the public to truth – especially if they can bridge the gap from existing broadcast vehicles to socially sourced and shared stories.

4. We’ve only begun to witness the power of contextual information to make social media hyper-local and hyper-personal.
FourSquare is the tip of the iceberg of new social technology that will harness your contextual information to provide a more localized and personalized experience based on the data you choose to reveal. There is a risk to privacy inherent in these technologies, and we must accept the responsibility of managing that risk even as the rules that define it continue to shift.

5. Brands and business models that translate themselves seamlessly to Social Media find their truest advocates there – both existing and new.
The power of consistent branding is more important than ever, and so is brand strategy. Whether you sell credit card, houses, or comic books, your enthusiastic audience is awaiting engagement that’s true to your brand.

The majority of professionals use Tweetdeck and/or Co-Tweet.
Seriously, every laptop screen at every seat seemed to be viewing one or the other.

Social media people are the easiest people to network with – especially at #140conf.
Everyone has a story and everyone is genuinely interested in your story. Walking up to strangers can be scary, but the vast majority of them will be happy you did.

All of the #140conf panels are now available online in video!

#140conf was a lot to digest, and so were my nearly two dozen posts on the subject. I know not everyone has time for either, and definitely not both.

In the 140 spirit of brevity, below I present my abridged version of the conference as told by just 14 can’t-miss talks. I left out a lot of panels I really loved or learned from in favor of the ones that pack the most punch as videos, and that help to tell the surprisingly consistent narrative I drew from the event.

Watching my abridged version will take a bit longer than 140 minutes, as the panel chats are 15-20 minutes in length.

Even if you aren’t on the list I likely still loved your talk, because I loved the entire event. If you want to see the entire conference and you have the time to watch one video a day for the next few months it would be time well spent.

END_OF_DOCUMENT_TOKEN_TO_BE_REPLACED

Jeff opens with why our discreet digital footprints matter. One status update might not be meaningful now, but in aggregate later when you don’t remember yourself (or when others don’t remember you) it will be more important. Social media is the new shoebox of family photos.