Okay, this is the last one, I promise.

(Seriously, if this had happened on television I wouldn’t care at all, but it happened in real, physical space and I want to share it with you because it was just ridiculous.) 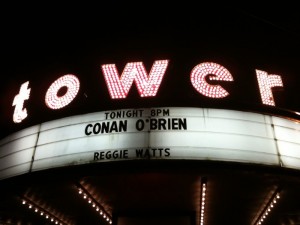 Photo via my lovely date for the evening, @brimil

A recurring theme of “The Legally Prohibited from Being Funny on Television Tour” was all of the things Conan O’Brien isn’t allowed to do. He joked that not only is he prohibited from being funny on television until September, but he is prohibited from appearing on TV entirely and so are similar likenesses, such as Johnny Neutron and (hilariously) Tilda Swinton.

Conan made a big deal over wanting to do his “Walker Texas Range Lever” bit for the tour even though NBC may hold the rights to that title. So, he instead presented “The Chuck Norris Rural Policeman Handle.” Each pull of the handle produced a riotously out-of-context Norris clip.

After pulling the handle for a few choice clips on his own, he brought out Tina Fey to do the honors. Except, Tina’s clips weren’t so much hilarious as they were disturbing…

The best part is Tina’s face after the third clip at 4:21. Priceless.

Considering I originally bought my quartet of tickets to scalp for a profit to Conan-obsessed fanboys, I’d say that my attending the show and witnessing all of these hijinks this would be the highlight of my year if I wasn’t buying a house in seven days. And this is coming from someone who just jumped out of a plane and was almost murdered by pine barren monsters.