Contra is masterpiece of camouflage, with Vampire Weekend burying their true identity beneath layers of musical influences and hiding cutting, carefully composed poetry beneath Afro-Jùjú rhythms. Even the band’s name is a disguise, evoking goth rock or careless popped-collar excess, but not the delicately-crafted, smart pop lying beneath the surface of their carefree songs. 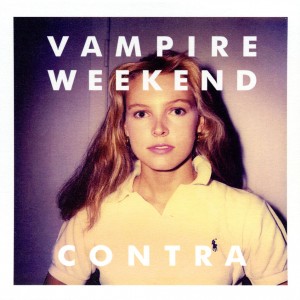 Who’s to say this isn’t the work of wasted Ivy-Leaguers on an extended lost weekend? Silly “Horchata” and sunny “Holiday” seem to fit that mold. The latter is a nearly-Ska retread on Weezer’s “Islands in the Sun,” but listen closely to the story implied by the lyrics – a sketch of a naive co-ed who would cheerfully wear a neon Che Guevara shirt while vacationing on a central American beach.

And the gleeful, hyper-literate “Horchata?”After the ten-cent-word rhymes of its opening verses it dispenses this observation: “Here comes a feeling you thought you’d forgotten,:chairs to sit and sidewalks to walk on. Oh, you had it, but oh no you lost it. You understood, so shouldn’t have fought it.”

That is Contra, in a microcosm. Yes, Vampire Weekend is at a party with their peers, wearing their pink, popped-collar polo shirts… but they’re the most introspective guys in the room, and they feel sorry for every privileged person in the place.

That might also include themselves, as on “Taxi Cab,” whose delicate regret and self-pity wring more pathos from the word “grocery” than Death Cab For Cutie can muster on an entire album.

Vampire Weekend is like Weezer or Death Cab for Cutie, if both eschewed their rhythm guitars, convenient couplets, and conventional song structures. So, really nothing like either of them. Rather than lose themselves in the hopeless emo rock their constant pity for self and others would suggest, Vampire Weekend plays up the utter camp of their musical influences to brighten the corners of a dour world.

Each song offers crowd-pleasing poly-rhythms and thesaurus-wielding rhymes with an intricacy that suggests a college thesis rather than a sound collage, all-but-obscuring lyrics depicting the blithe beauty of thoughtlessness, frailty, and failure. “Cousins” is the surest party-starter on the disk, with its bass line hopskotching over tinkles of rimshot percussion. Between seeming inanities the lyrics casually accuse, “If an interest in culture, you should be lining the walls. When your birthright is interest, you could just accrue it all.“

That wit, with its irony-dripping, Ivy League pedigree, pervades the album – both in lyrics and arrangements. Sometimes the utter Paul Simon-ness of it becomes too obvious, but even at its peak on “White Sky” the band is stretching beyond his Graceland, adding non-stop trickles of guitar picking that are impossibly precise and their opposite – an imprecise, swooping falsetto vocal hook. 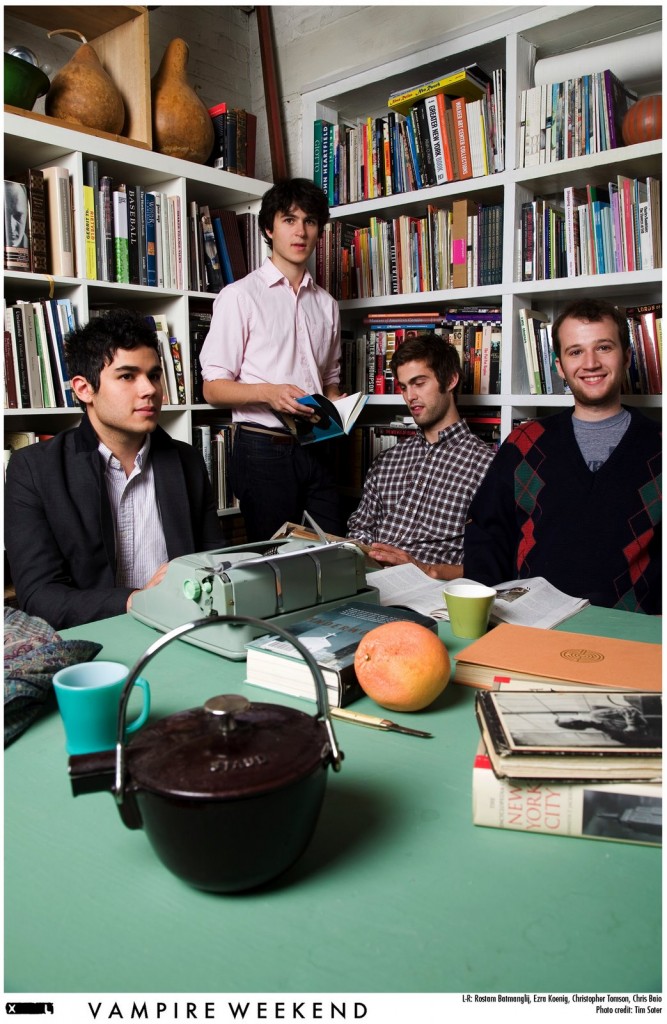 Only once is the poly-rhythmic pretense abandoned for straight-forward pop, with the direct and dirty guitars and percussion on irresistible “Giving Up the Gun.” It sound checks Depeche Mode while describing a washed-up hipster, once surely gaudy but now rusty and gauche. “You said you wouldn’t flinch,” it muses, “But in the years that passed since I saw you last you haven’t moved an inch.”

Even as the band adopts an almost-trite electro-pop reggae take on UB40 on “Diplomat’s Son” they dispense the most heartbreaking narrative of the album, how a mutual desire of two friends lead to icy dissolution. The cleverly genderless narrator obsesses and waits, finally melting into bed with his or her obsession, only to watch early the next morning as “in the dark when the wind comes racing off the river there’s a car, all black, with diplomatic plates.”

Closer “I Think Ur a Contra” is equally plaintive, but with music to fit the mood – a reflection on growing apart where both sides of a romance represent their own revolution, a civil war that will never resolve back into a single bed. “Never pick sides, never choose between two,” was always their strident mantra, but finally our narrator is ready to admit, “but I just wanted you.”

You’d never expect that to be the end of an album that started with the silly “Horchata,” but that’s the point. Contra is an album of endless entendres – dance-party and pity-party, emotional confession and emotionless evaluation. Is any of it the real feelings of the band, or just another disguise? You’ll never know, which is the point of Vampire Weekend’s careful camouflage. All that’s obvious is that Contra is an outstanding record.