A year ago if you told me I would willingly lock myself in a room heated to 105 degrees with 40% humidity to do 90 minutes of extreme stretches with a gaggle of nearly nude hipsters, dancers, and absurdly ripped gay men, all dripping with sweat…

Actually, I have no idea what I would have done if you told me that a year ago. There’s really no way to predict past me’s response. Maybe I would have asked you to mix me a stronger drink. 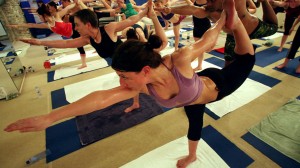 I have surprisingly awful balance, but I actually managed to strike this pose twice last night. The first time I promptly fell on my ass due to my complete and utter shock at getting into it. Oh, and the sweat.

Yet, there I was last night at my first Bikram Yoga class, dripping with sweat (a rarity!) and also nearly nude. Nearly nude in public! I like to wear t-shirts to the beach, people. The only time I get naked in front of other people is under carefully controlled conditions on the internet.

That was a joke; I haven’t been naked on the internet for, like, a decade.

After a few months of yoga classes at work I pestered my two fittest co-workers to tag along to a class in the outside world. Possibly as part of some form of ongoing hazing, they suggested I come with them to Bikram yoga.

There I was, half naked and sweating, at one point dropping out of a triangle pose because I was about to faint. I think at some point I also prayed to an undetermined god of yoga to strike me down where I stood. But I stuck with it the full 90 minutes.

(Don’t worry, I’m going somewhere with this. This might become a blog about homeownership or television shows from time to time, and it’s always a blog about OCD and slight social awkardness, but I swear it’s not going to turn into a blog about yoga. None of us wants to read that.)

(Unless it has to do with slight social awkwardness, in which case it is fair game.)

Nearly ten years ago I was in my first student run theatre production (and my last piece of theatre at Drexel). Being student-run means we had to do everything ourselves – sets, promotion, makeup – everything. And at the time the idea of choosing what to wear onstage seemed a bit beyond me. It had to be what my character would wear, but also say something about him.

Luckily, we had a fantastic advisor, Michelle, a Drexel administrator working on her Fashion degree. I talked out my character ideas with her, and we settled on what I ought to wear.

It turned out fine. The first time E ever saw me was onstage in that show, wearing those clothes.

Later, I had graduated and was living with E, and I decided it was time to get better at singing. I found a voice instructor I wanted to try, and headed to his house on the train. Who was sitting next to me? Michelle, who I hadn’t seen for years, and her daughter.

It turned out fine. That voice instructor didn’t work out (he was creepy), but I came away knowing what I wanted. I eventually found the ideal coach for me. My voice blossomed. My singing became healthier. Now I can rehearse two nights a week with rock bands and not get the slightest bit hoarse.

Last night. I was lying next to the window of the Bikram studio in my dri-fit shirt, already desperately sweating. I’m the kind of sweater that has to bring a second shirt to a wedding, because I will be dripping with sweat on the dancefloor … a dancefloor that’s not heated to 105 degrees or approaching some form of medieval torture.

A man laid his mat next to mine, and I was relieved to see he was not a dancer or absurdly ripped, but a normal dude in a dri-fit shirt like me. He smiled hello and set out a second mat. “For my wife,” he said, so he wasn’t gay either. 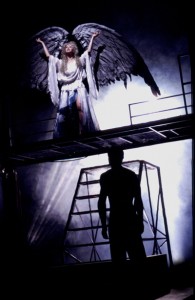 Michelle does not typically have wings or appear in a Tony Kushner play, but she still may be my guardian angel.

That put me at ease, even as I mopped the sweat from my brow for the first time and laid back into Savasana (AKA corpse pose, and even that was hard to do in the heat). When I finally emerged from it to start the class, a women’s voice called from off to the right.

Yes, Michelle was in my yoga class, sitting next to her husband, the normal dude in the shirt.

Despite at points thinking I really was going to pass from this life onto the next, Bikram yoga turned out fine. I stuck it out in the room the entire time, emerging with a new appreciation of 80-degree weather, drenched in sweat on a crazy endorphin high.

Though I hugged Michelle goodbye, I’m starting to think she isn’t real. I mean, I definitely touched her (I wasn’t that high on yoga), but what other explanation is there for her appearing at important junctures in my life to signal that a major decision lies ahead, and it will turn out fine.

Even if she isn’t a Roma Downey-style angel, she’s definitely a good omen.