You are here: Home / Personal / topics / thoughts / how i feel

Here’s something I don’t do too often anymore. 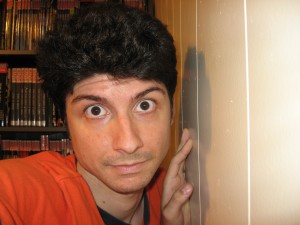 In my natural habitat: my home office, posing in front of my shelves of X-Men comics.

This is how I feel:

You know that not-enough-sleep plus caffeine feeling? Hell, you might operate exclusively upon that feeling on a daily basis.

That’s not normal operating procedure for me. Mostly because giving me any amount of caffeine is like giving me really good drugs from before I was born – the kind Robin Williams did routines about. That’s me on caffeine.

Instead of being high on that, I’m high on my own body. I’ve been waking up super-extra early, partially due to the obscene bird chirping action going on in our yard, but partially to go to the gym as much as possible.

(Yes. Me. Exercising and liking it. Do not be alarmed. I swear, this is still Peter typing to you. This is not Pod-Peter. Even if Pod-Peter would say that. You have to believe me. I’m real.)

Today the gym didn’t have yoga or pilates or whatever, so I picked the next most girlish class I could find:  Zumba, of all things.

Let me tell you: I was one very obvious white boy with moderate rhythm in a Zumbariffic room full of all colors of soulful, rhythmic women.

But guess what? I grew up doing Zumba – every week with my mother.

Okay, not actual Zumba. In the 80s it was called “dancing like Tina Turner,” which my mother is adept at doing. Highly, highly adept. Much more than you could ever hope to be.

I am much, much less adept at doing it, and I move my whole lower body when the women are moving just their pelvic bones, but if I can do anything it’s shaking my ass to the beat for 45 minutes straight. My mother might have not put a lot of expectations on me as child, but that was one.

I Zumba very well, thank you. Well, and with more sweat than I ever knew my body could generate in a single week.

After an intense gym day I get this hollow feeling. Not hollow like an egg shell with the egg sucked out of it. Hollow like something waiting to be full, and hoping I’ll be awake and upright long enough to do it.

This past week I’ve felt fulfilled.

E and I just made it through an insane pair of months featuring three weddings of three of my best friends, two of which I was in the parties for, and one of which I co-planned and dungeon-mastered and hosted the bachelorette party of.

That’s a lot of nuptial bliss to absorb in a short amount of time. I feel like I’m living inside of one of those TV wedding shows. To make things more surreal, E is designing wedding invites and errata for even more of our friends.

Our house is the mother effing My Best Friend’s Wedding channel.

Meanwhile, I rehearsed twice a week with two rock bands on two different instruments on which I need to know about 50 collective songs, which only get notated for me if I notate them myself. We played three shows in this pair of months.

Our house is also Rock Band Central (playing of the game Rock Band notwithstanding).

Also, E and I threw a housewarming party a day after going to #140conf in NYC. And I emceed two health fairs. Oh, and there’s the matter of having the best third wheel ever as a roommate – E’s brother has been here the entire time while acting at the Walnut St.

And I got my driver’s license.

Our house is insane.

You know what? I chose it all. Friends I love and music I love and people I love. I got myself into it all at once, and I made it out. I didn’t freak out. I still was as awesome as possible every day at work. I didn’t quit anything or cancel any engagements. I only got sick for a day or two (stupid conference cold).

I chose it all. Two months of projects are over, and I’m lining up the next two months. Driving. Blogging. Recording. Top secrety secreting. And I’m going to love it all.

On the whole I feel accomplished.

I’ve made many choices the past few years – to get married, buy a house, to make and break friendships, to collect thousands of X-Men comics.

To learn to drive. To get in shape.

You know, important choices. Choices that often started off as nebulous goals.

All of my friends and co-workers know about my annual “GOALS” spreadsheet. Some have even stared into the visage of the mythical beast which, like Medusa, can turn lesser men into stone with its stringent requirements and merciless points system.

It’s less like a normal person’s goals and more like the balance sheet for a Fortune 500 company.

Most goal-setting people say when you set a goal you should visualize how your life will change when you achieve your goal. Maybe my fantasy life is already over-active, so that has never worked for me. Unless my goal is going to result in me becoming a superhero, nothing in my head is going to be particularly more exciting than the daydream I just had about dueting with Lady Gaga on “Love Game.” Not even having a six-pack of abs is as cool as either of those things.

Me, I just like having hard things to accomplish. I don’t always choose the most rational thing to accomplish, but it’s always something within my power as President and CEO of Peter to achieve.

Really well. Highly achieving. Moving forward in all areas – work, blog, rock, and house. Achieving things I didn’t even originally set out to achieve, like (healthily) losing weight and having CK earn some money for once.

Buy some stock in me while I’m cheap.

This is me, and this is how I feel: happy.