This fine digital establishment will celebrate it’s eleventh birthday in three short hours, accompanied by the typical Inception-level-introspection of one of my anniversary posts. (If you have never read last year’s anniversary post, it is surely my favorite CK writing of all time.)

Before we get there, here are the ten posts I most adore from the past year – and why I adore them. 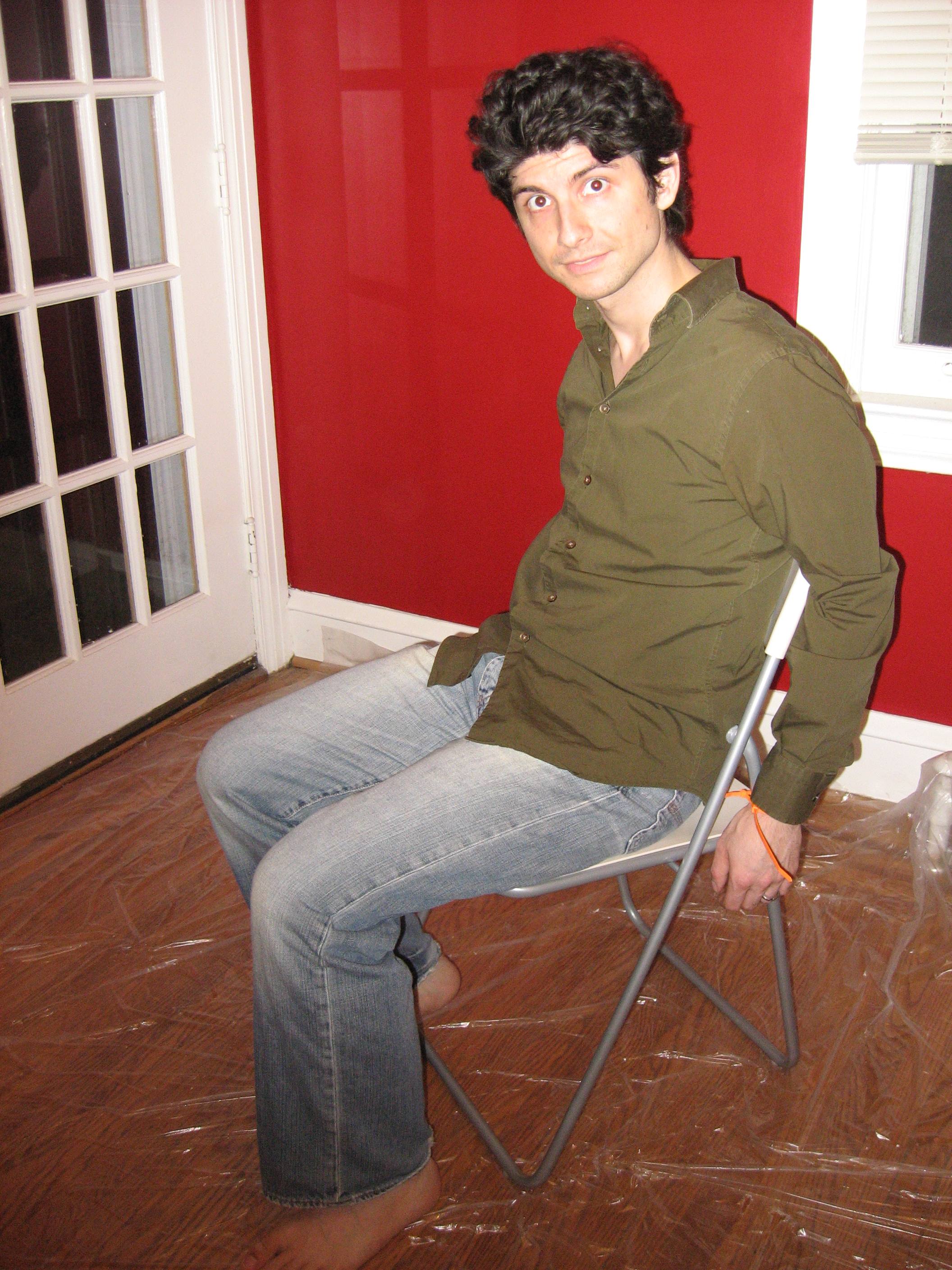 As shot by E for the post "Bondage Is Progress"

I hurried down our street, rereading what I had written on my laptop, only twice stumbling off of the sidewalk and into hedges. I unlocked our front door, flung it open, and announced to E:

Honey, I need to you to tie me to a folding chair and take pictures of it!

Why? Adding the writing of a novel to the already circus-like conditions of my life yielded some interesting results. What other project could possibly lead to me demanding photos of myself tied to a chair in the middle of a room covered with plastic drop sheets? And, would I ever think to ask for them to begin with if not for CK? I guess I could just leave pictures scattered around Philly, but without the context of the post I really do look like I’m about to become a murder victim.

[Visit the post for a video playlist of our gig at the Tin Angel last September.]

Why? I didn’t make such a big deal about it at the time, but in retrospect this was a big watershed moment for Arcati Crisis. Not only did we stop beating ourselves (and each other) up about mistakes at gigs, but it was like a graduation ceremony from being an acoustic band before we delved into making drums a permanent fixture in our sound.

Also, we look and sound amazing in the videos in this post; the debut version of “Dumbest Thing I Could Do” is hot. (I discuss it further in another post.)

8. Baby I Can Drive Your Car

(“Just think,” Nan pointed out with glee, “if we weren’t in [the Nan-Tank] that wall of water we just kicked up would have swallowed your entire car!”)

(I can neither confirm nor deny if that was followed by a subtle “yee-haw!”)

Why? @amanda_nan has a way of making everything we do seem blog-worthy, whether it’s getting lost in the middle of Manhattan or having a Harry Potter movie marathon. Usually I restrain myself, but here I swung from comparing my life to a comic book video game to trying to park the massive Nan-Mobile in blinding rain while all of our friends were drunk at home. Everything is a homina homina adventure with Nan. 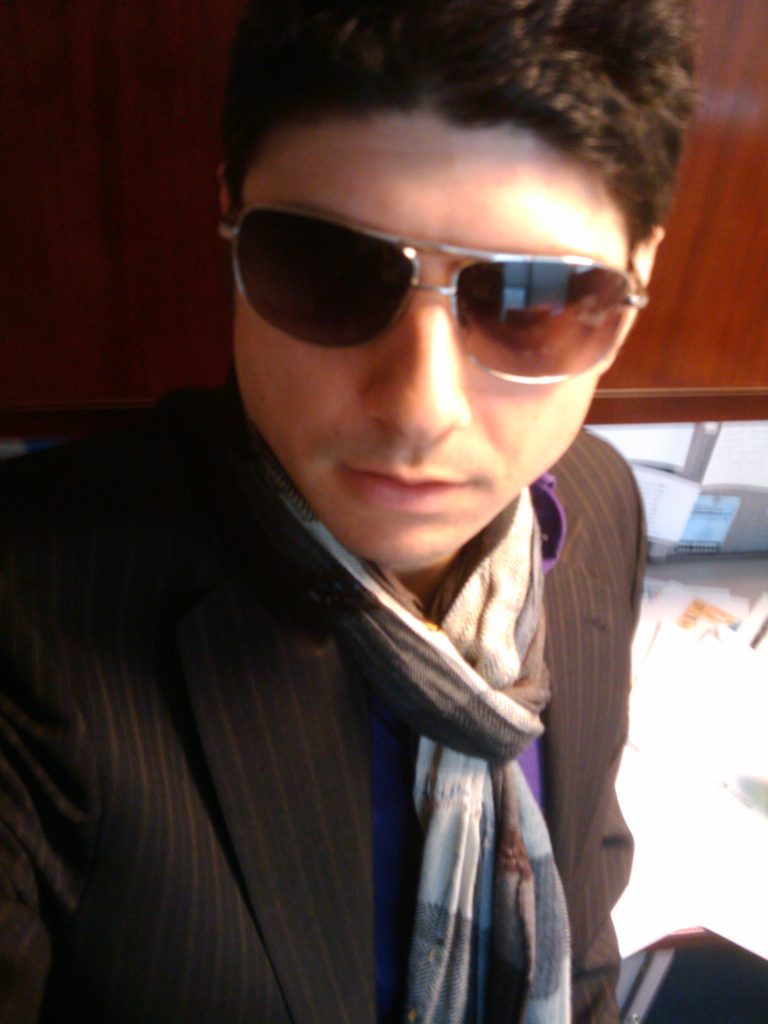 My 2011 Twitter profile pic, of my get-up for Ross's bachelor party.

You know, I can’t not be polite and chat for a minute if someone is nuzzling me with her breasts, and then I feel bad for taking up her time, and then I am obligated to fold dollar bills and slip them into improbably small straps holding together even more improbably small garments.

Why? This was a major milestone for me. Not because I learned firsthand about the clammy skin of a post-pole-dancing stripper, but because I did something that would typically make me uncomfortable and self-conscious and still found the fun in it.

1. Sara Bareilles – Kaleidoscope Heart. A gleeful, big-voiced, piano-pop record not unlike what I expected from Kelly Clarkson fresh off of Idol.

2. The Black Keys – Brothers. Turns basic two-man blues stomp into a sonic wet cement that will fill up your ears and harden to stone, never to exit.

Why? In the past year I finally got accustomed to using CK in the way it has always meant to be used – as a vehicle for my intense crush on something in the world around me. Sometimes that can say a lot more about what’s happening in my life than yet more introspection.

5. You Sound Like a Vulture (an Arcati Crisis adventure)

“Yeah, but if you keep the two that worked, and descend…” I started imitating her guitar with my voice, wailing a solo. “raw wah, whear wheh wah, rah weh wah,” I paused for a breath between phrases, “and then a lower ascending line.” I climbed back up the scale, “until it resolves!” I shouted, wheezing and wailing until I reached a bent note at the top.

I finished my performance and looked at Gina expectantly.

Why? 2011 has introduced a whole new level of insanity to Arcati Crisis as Gina and I try to figure out how exactly one manages to be a local indie rock star. We could launch a highly entertaining vodcast containing nothing but our inane between-songs banter without including a single frame of us actually playing, as exemplified by this post.

So, when E proposed a plan for regrading our front lawn that began with, “find some free fill dirt from Craigslist,” I just nodded. I mean, first, she’s always right, but also, it’s not like we are going to break the front lawn, right?

I mean, the dirt is just dirt, but the offer must have something to do with drugs. He said he needed to fill in his yard before he put in an above ground pool, but “fill in the yard” probably meant “bury the evidence” and “above ground pool” was probably code for “massive bong.”

Why? Sometimes I try to write posts that are funny. That usually fails. Other times E and I are living a life so ridiculous that the funny just writes itself. Also, apparently I say “I mean” a lot. 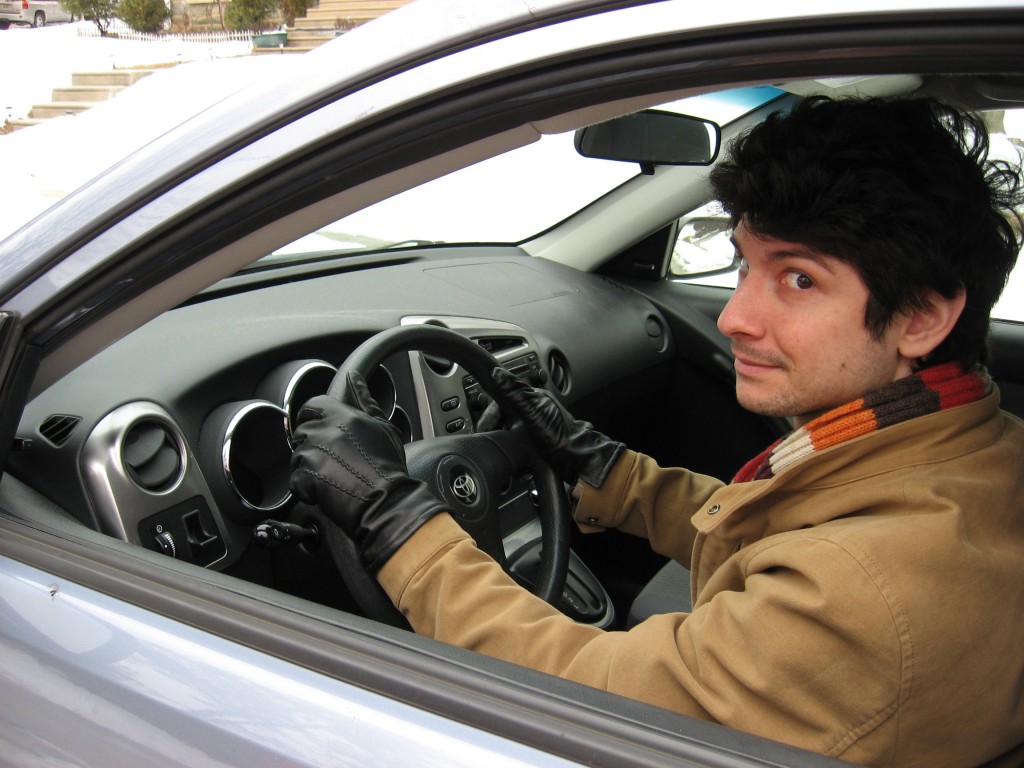 My first drive, shot by E for the post "The End is Nigh."

This tune has a slew of references to the book, including some specific lines. The recording has plenty of rough edges, but it sounds right, and I’ll take rough and right over mannered and plasticine any day of the week.

(Okay, not really, but let’s just think that for the purposes of this post.)

Why? A connection with a co-worker over Twitter results in me audio-stalking a local author I barely know by writing songs for the soundtrack of his self-published novel and posting videos to my blog, one of which is by all accounts one of the best songs I’ve ever written.

No, there’s nothing strange about that. That happens on every blog.

1. How I Got My License, or parallel parking is the mind-killer

You know how on Friends Phoebe doesn’t know the names of any guitar chords, instead calling them things like “bear claw” and “old lady”?

Why? Even as I was in the moment of having a panic attack while in line for my driving test I was composing this post in my head. The fact that I wound up volunteering to perform a Philly bump on the test and then illustrating the post with Burt Reynolds makes it all the more memorable.