It is a well-known fact that I am no stranger to wearing makeup.

In high school this took the form of lip gloss and body glitter. What can I say – I thought I was David Bowie and was obsessed with anything that could make me sparkle like a Spider From Mars. 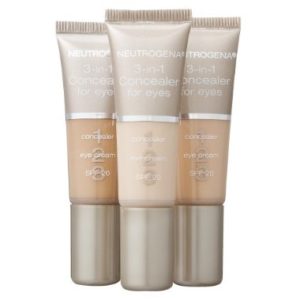 This is not a post about body glitter. It’s a post about being a local rock star and a vain motherfucker who applies makeup in the men’s room of my office and does not care about any looks or comments I get because I am going to walk out of that bathroom way more gorgeous than I came in.

In fact, if you’ve seen me give a presentation or play a show in the past two years, you’ve seen me wear plenty of makeup and probably didn’t even know it.

I know I am not the only vain, presentation-delivering local rocker with an interest in this stuff, so I’m sharing my secrets with the masses.

A few years ago in a particular pique of angst about the inescapable genetic heritage of dark circles under my eyes, E handed me her Neutrogena 3-in-1 Concealer for Eyes.

Having not worn much makeup in the decade since I also gave up vinyl pants, I was a little reticent to try it. I became a quick convert. This is not heavy, greasy makeup. It’s light, it blends in with my skin tone, and it doesn’t bother my medicatably grumpy T-zone in the slightest.

It became my standard, daily defense against especially baggy eyes. I would wear it to work for weeks at a time with no comment from my colleagues.

When it was time for our wedding, E went through a ritual of several official Hair & Make-Up Tests to make sure she had a solid plan for our big day. I was a little freaked out that the only thing I could control would be how closely I shaved – it seemed like woeful under-preparation for thousands of dollars of photography!

This time it wasn’t E to the rescue, but my co-worker Kate. She wasn’t a major makeup wearer, but she confessed a special secret: she relied on Neutrogena Healthy Skin Enhancer Tinted Moisturizer to even out her skin tone. I'm gonna be a supermodel, and everyone is gonna dress like me - wait and see.

Here I was even more skeptical. Something to rub all over my face and “tint” it? It sounded like something that would make my sensitive skin freak out, and much too girly to wear at my wedding.

[That may be the only context in which I have ever rejected any plan of action for being “too girly.”]

That wasn’t the case at all. The Skin Enhancer simply smooths things out in paces where I’m naturally a little blotchy, like my chin. I put a dot there, another two dots at the top of my laugh lines, and a final pair at the edges of my jaw, and then blended. To that I added the final piece of my arsenal, a Neutrogena spot concealer (not the best, but it’s consistent in tone to the other two).

Verdict? I looked like a supermodel at my wedding, and most people thought I was joking when I said I had on as much makeup as my wife.

To this day I rely on that simple trio of Neutrogena products to take the unsightly edges off of my face for rock shows and special events. Aside from occasionally going overboard with the eye concealer (which, if applied heavy-handedly, shows up in flash photography), E professes that she can hardly tell when I’m made up.

Think you would know? If you saw me at the Philly Geek Awards, you saw me with facial treatment set to “stunning.” Could you tell?

Vanity aside, whether I’m pitching a campaign or rocking a mic, I want to present an enhanced version of the normal, every-day me. Smoothing out the edges of my face is just one way that I try to make myself a little larger than life.

The rest of my preparation is a trade secret.