I had a reason, mind you. Just not a good one.

“Physical” held the longest run at number one on the Billboard chart for the majority of my childhood. Ten weeks, as Casey Casem would remind us on his countdown any time a song strung together multiple weeks at number one.

Not just any ten weeks. Ten weeks starting the year I was born.

(Watch me cover “Physical” on YouTube. For more info on my 30 for 30 Project, visit the intro post.)

I was eight or nine years old, and I hated this Olivia character. I had seen her weird Happy Days hair on the cover of the VHS of Grease. Why should her silly song with its antiquated video of prancing fat people hold the record when newer, more relevant luminaries like Michael Jackson or Madonna were clearly more deserving.

(Of course, Whitney shattered the record with “I Will Always Love You.” I remember sitting in a parking lot at the marina where my mom worked when they announced she had broken the record on the radio. By then I had moved on from getting angry about Casey Casem’s countdown. I had tween angst and comic books to worry about at that point.) 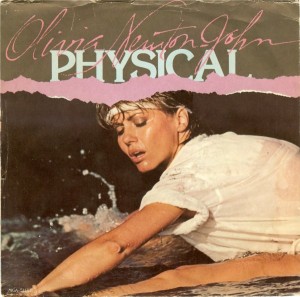 What’s interesting is that “Physical” hasn’t had the extended shelf-life of other monster hits from the early 80s. Despite its record-setting, risqué success (seriously, some stations censored it!), it’s not the kind of thing you hear on the radio all the time. It has always been an artifact more than a song.

When the choir at my employer asked me to play guitar for their version of the song I honestly couldn’t remember the last time I had listened to it front to back. When I did, I discovered that “Physical” has a lot of good things to speak for it. Its bass strut up the scale is shared with Jackson’s “P.Y.T.” It has that weird little diminished-sounding thing at the end of every stanza, increasing the tension and resolve. The vocal crests before the chorus, a false climax before descending into the much gutsier mantra of “let’s get physical” and the heavy breathing on “let me hear your body talk” (which was what got censored, back in the day).

I was excited when Glee updated the track in Season 2, stripping away the dated production to make it a glossy dance standard. Olivia Newton John sounded… could she really sound better thirty years after recording the original? Sexier, even?

Suddenly the song I claimed to hate was playing on repeat on my iPod. It turns out, I didn’t hate the song or it’s singer – just the context.

(PS: My original choice for 1981 was Hall & Oates “Kiss On My List,” but the melody is physically impossible for me to sing no matter what key I choose. I can’t explain it. Also, Arcati Crisis’s choice would clearly be “Don’t You Want Me” by Human League.)