There are certain bands – significant, important bands – that I grew up completely ignorant of.

This was surely my parents’ fault. My father, as has been established, brooked with no current music. My mother was all about her Motown, disco, and glossy 80s dance pop.

There was no middle ground for New Wave or 80s rock, so I grew up assuming both were either non-existent or unspeakably terrible.

As a result, I know some bands less as artists and more as totems of their time. Duran Duran is one such band. I’m sure I saw an occasional video on MTV growing up, but they’re largely a band I know about in retrospect as a symbol of New Wave acts that lasted long enough to constitute a small genre of 80s rock that wasn’t all about Americana. 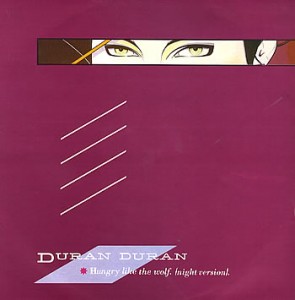 Curiously for their level of recognizability and success, “Hungry Like the Wolf” is the only song of Duran Duran’s I know – and, embarrassingly, I might primarily know it because Courtney Love covered it on Hole Unplugged. In fact, it was the song (or, rather, the video of the song) that broke Duran Duran into America, where they had been largely unheard to that point.

(E would point out that I can probably hum a few bars of “Rio,” but my knowledge of it is so glancing that it still catches me by surprise when it comes on the radio).

I stripped the song of its iconic noodle of a riff, reducing the verses to just two chords alternated back and forth. Most of the melody sits at the apex, a baritone high E, deigning to descend only for the “do doo do” vocal breaks. Then, the chorus presents a curious change in key, as if coming from an entirely different song, though the vocal continues to hang from the same note.

I think that disparity represents a lot of the charm of “Hungry Like the Wolf.” The verses are this urban trickle – you can hear cars dancing by on gurgles of synthesizer. But the choruses take place somewhere more verdant, bare feet pounding against packed earth. Which context is real, and which imagined? The city woman feeling like the prey of the man that’s pursuing her, or a gamine animal in the forest almost sensual in its teasing avoidance of a natural predator.

(1983 was a year with few songs for me to choose from aside from Madonna’s debut, which as an all-time favorite lies outside the scope of this project. In fact, “Hungry Like the Wolf” more properly belongs in 1982, but it was in January of 1983 that it hit number one in America. I suspect Arcati Crisis would likely have chosen a track from U2’s seminal War, or one of “Every Breath You Take and “Love Is a Battlefield,” all of which variously play to our strengths as a band.)