Apparently, 1984 is the point when the 80s were completely gay.

Note that from me that label is never meant as slander. Here it’s about the celebration of all things glamorous and fey being totally mainstream, and it’s the only explanation I have for Wham’s “Wake Me Up Before You Go-Go” hitting number one in the same year as “Karma Chameleon” from Culture Club.

Hell, the number one album spot spent over half the year occupied by Thriller and Purple Rain, neither especially a symbol of restraint and masculinity. In 1984 it was totally cool to be a over-wrought, over-styled, over-the-top male vocalist.

1984 is also a year that I have some vague musical recollections from, and I’ll tell you that in my house we are all about gay 1984. We had all four the LPs mentioned above, and songs from each are encoded on my DNA. I even had a somersaulting routine set to the prior year’s “I’ll Tumble 4 Ya.”

This era in my musical development was temporarily forgotten when my mother pitched her LP collection. Gay 1984 became a guilty pleasure occasionally heard on the radio, not something I could dial up on demand. I wasn’t going to pass up the chance at a new modern rock album to spent $13 on an embarrassingly dated Wham! CD.

Now that I’ve reconnected with this music I see how integral it was in shaping what I want from a pop star, and why I want to be one. There’s a through-line from Wham’s white suit jackets to Prince’s ruffled ascots to me thinking I was the living embodiment of the Spiders From Mars in high school to today. 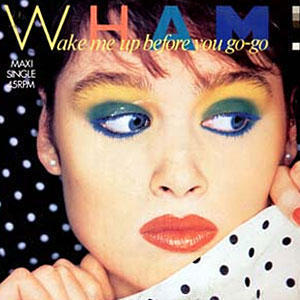 Unlike some of the more intricate tunes of the era, “Wake Me Up Before You Go-Go” is unforgettable because it is so damned simple. If you strip away all the jazz choir silliness and horn section from the track it’s a simple staccato rhythm pinned mostly to two chords. The melody continually climbs and descend the staff, never pausing in any single register and covering two entire octaves.

Honestly, if the song it wasn’t about clubbing it could easily be mistaken for something Tin Pan Alley or by Burt Bacharach. (Let’s not forget, 1983’s “Always Something There to Remind Me” was originally a 60s Bacharach tune). Even if there are several layers of meaning to infer into George Michael’s lyrics, it’s essentially a tune about not wanting to be left behind by a go-go dancing partner. What could be more sixties than that?

I’ve always wanted to cover the song, but Michael’s voice is a marvel and over half an octave higher than mine. As I cycled the key every downward I discovered that vaudvillesqe thumpity-thump rhythm of the song, and suddenly all those staff-spanning melodies that seemed so daunting snapped to fit easily inside my baritone range.

(1984 was a tough year for me. Most of what I wanted to cover was from Cyndi Lauper’s She’s So Unusual, but my top choice was “Time After Time,” and my cover arrangement is extremely similar to the one Javier Colon performed in his breakout debut on The Voice.)