When I was a kid, I was obsessed with G.I. Joes. A lot of kids were. They were three dollars each with a seemingly infinite amount of new line-ups to collect.

Except, my obsession was slightly different – my G.I. Joes were superheroes. Each one of them had a special power, and they formed teams and went on missions just like comic book superheroes. In fact, I even kept a binder outlining all of their story exploits, including issue summaries, origins, and deaths.

Since my playtime was more about building narrative than mashing pieces of plastic against each other, I wasn’t shy about playing with G.I. Joe’s straight into high school. The toys allowed me to be a sort of writer/director, visualizing plots that found their way out of my imagination and later into short stories.

All that is to say, though I loved G.I. Joes, I never particularly cared for G.I. Joe as a concept. I don’t love war stories and gun violence. That put DC’s new war anthology on shaky ground with me, unless they managed to power it up, a la my erstwhile 3 3/4″ friends. 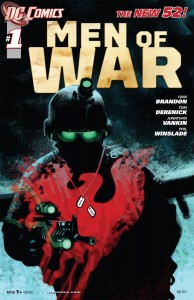 In a Line: “Anyway, I got out of the Peace Corps ‘cuz it made me realize – if you want to do good, it helps to have an assault rifle.”

140char Review Men of War #1, hard-bitten war anthology w/slightest twist of super. Not my kind of comic but I can’t deny it was well-done, esp terminology

The scripts of both stories are beautiful things, in their way. Word balloons are stuffed with armed forces acronyms and special ops lingo, and they help to transport you into the world these characters inhabit without much prior knowledge.

The plot of first story about Sgt. Rock is solid but strangely unfilling. We’re treated to the grimly stubborn infantryman Rock, promoted to a special ops squad thanks to countless acts of unspecified badassness. Then he heads into an unnamed region filled with unseen insurgents, witnesses an unidentifiable super-being
wreak havoc, and watches his team die an ignominious death (not really a spoiler, since we see it in the first panel)

While all the dialog is ace, I feel as though the vaguely-detailed story depends on some foreknowledge or affection for Sgt. Rock. Without that, it’s a one-and-done tale about a brave soldier being decimated by a superior force. I don’t see much point in a second issue.

I liked the Navy Seals tale much better. We get the personalities of a core cast of characters in short order as they deal with a high pressure situation. Vankin does a great job differentiating the team in limited panel time, giving each man a smattering of personality to go with his call name.

Despite not caring for army comics too much, I found myself investing in the outcome of their story. I cared if the wounded guy died, was frustrated by the impulsive actions of Tracker, and was genuinely shocked and sickened by the story’s climax.

The problem with army books is that everyone starts looking the same.

In the Sgt. Rock story this is a major problem for me – not so much because of the pencils, but the colors. It was like military-grade sepia tone. In a series of lowly-lit situations all of the shadowed faces begins to blend together.

While I liked the line art and colors in the second story much better, the lack of differentiation was actually worse. For white army dudes in the same uniform, and you only give one of them facial hair to help us tell them apart? The dialog does a decent job, but I wouldn’t have minded a minor visual differentiation, even if it slightly shattered the perfect adherence to real-life army code.

I love the fuzzy cover with its subtle phoenix image in the blood and gunfire – I missed that detail on the small preview image.

Men of War is an anthology collection that delivers 100% on the promise of its title, with an ever-so-slight superhero skew of existing in the DC Universe.

Fans of old Sgt. Fury comics and The Hurt Locker alike will probably enjoy the on-the-ground glimpse of infantry and Navy SEALS.

For superhero junkies, the outcome is more hazy. While this is well-written and full of action, it’s less Captain America and more G.I. Joe.