Clearly the theme of today is titles where I’ve got no idea about a darn thing. These are apparently superheroes from the future who get mired in the past? Despite my DC newbness I have a way of hoovering up information about random heroes, yet I don’t even vaguely recognize a single one of them on the cover.

Will this one delight as much as Frankenstein did earlier this evening? Let’s see… 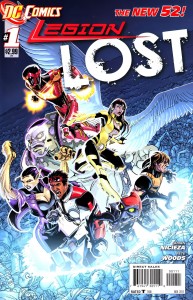 In a Line: “Accessing the sensory patterns of this time period without the transuit filter — is like to see, hear, and talk while inside a pool of mud.”

#140char Review: Legion Lost #1 aren’t the only ones lost. Fast-paced issue w/a slew of chars whizzes by with little effect

Legion Lost is a wobbly comic that I suspect improves greatly with any foreknowledge of the characters within or the events of Flashpoint.

The story? A team of superheroes from the future pops back into our present in a malfunctioning time traveling bubble, in pursuit of a villain carrying a contagion. They’re too late to stop him, thus their dilemma becomes how to retrieve him and retreat to chronal safety. However, there are some potentially deadly kinks in their plan.

Scripter Fabian Nicieza hits the ground running and never pauses for a second, wobbling be damned. I appreciated the non-coddling pace and the way his characters always restate the implied question of “what the hell is happening.” I came away with all of their powers and most of their names, if not their relationships with each other.

However, I wouldn’t call the experience pleasant.

Adding to the rushed tone is Pete Woods’s artwork, which looks like it tumbles out of his pen a mile a minute. I’m not sure what gives that impression. Maybe that the action doesn’t always track from panel to panel? Or maybe that the focus of his panels is always crisp and perfect, with perspectives and details bending away at the sides to thicker, heavily-inked lines.

I understood the book, and even enjoyed some of it, but it doesn’t seem worth returning to next month. I didn’t get the sense it was necessary to be telling a story with these largely charmless characters, and the story that was told wasn’t compelling enough to make me want to track down a seemingly difficult backstory.

Still, it seems like someone fresh from Flashpoint with some fondess for The Legion of Superheroes would be invested in the events that unfold.