While I love female superheroes – as evidenced by their ratings so far this month – I don’t always love the “-girl” versions of male heroes.

The practice of creating female (and teen) (and dog) versions of popular heroes is a decidedly DC habit, as Marvel never did anything of the sort with their core slate of heroes with the possible exception of She-Hulk. (Yes, you could argue more recent versions like X-23 and Rescue fill the same role, but they are separate characters with established stories – not Wolvergal and Iron Woman).

The problem with these matching woman heroes is they have to be altered with every reboot of their male counterparts. In fact, one of the major outcomes of Crisis on Infinite Earths was to remove Supergirl from continuity so Superman could truly be the last son of Krypton again.

The removal didn’t last for long. She came back as a peculiar amoeba-in-the-shape-of-a-girl courtesy of Lex Luthor, later merged with a mortal teenager, and was subsequently discarded in favor of a standoffish Kryptonian cousin – not to mention the massively popular Power Girl.

That puts us on version six of Supergirl with this debut issue. That’s a lot of girls to remember, but DC’s reboot says we can forget all the past iterations and focus on this new one. 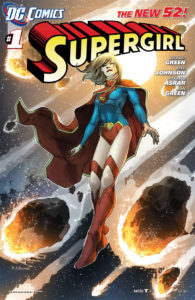 In a Line: “I know it’s a dream because there hasn’t been a blizzard on Krypton since I was barely old enough to walk.”

#140Review: Supergirl #1 has great art & provides the 1st super-strength bash of a fight this month, but skimps a bit on story 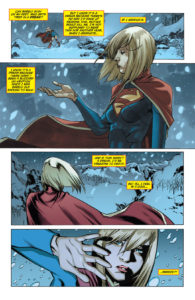 Supergirl #1 is an act of delicious contrition – the first out of three dozen DC relaunch books that’s all of an origin story, an exhibition of powers, plus a knock-down, drag-out super-powered fight.

This book teases so many things that people may have wanted or even expected from a Superman relaunch. We get an opening shot of meteors descending over the midwest. We have an egg-like spaceship of Kryptonian origin. We even get a set of super-powered fisticuffs! We also get an unveiling of killer heat vision that evokes Cyclops’s lack of control over his powers.

Except, we know all of that about Clark, so what’s the fun of it? Rehashing the origins of established heroes feels rote and deliberately padded. Yet, Supergirl is a heroine who doesn’t haven a singular definition. With her, every new display of power evokes a nod of our head, “Yes, of course she can do that. Very interesting.” 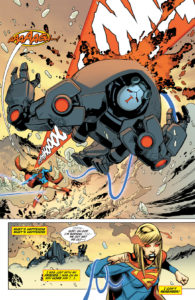 Writers Michael Green and Mike Johnson do a good job of threading internal monologue through brisk, easy-to-follow action beats, playing Kara’s bewildered reactions true to someone who woke up on another planet. That only a little story elapses around the action is forgivable.

I enjoyed the art, as much for Asrar’s pencils as for the beautiful palette of colors from Dave McCaig. The pair of them seem to ramp up the Super iconography through the issue until it reaches a thrilling crescendo in the last panel. All the while, Asrar draws Supergirl as young and lithe – not an overly-muscled, overly- breasty babe. (It’s a pity he didn’t fix her awkward face on the cover, it’s nearly classic.)

McCaig’s coloring style on early pages evokes watercolor, with seemingly liquid-stained patches of light and dark. It helped to maintain the in-a-dream mood of Supergirl’s narration, which is shattered by the bright lights of the squad sent to collect her. As dawn breaks over the battlefield, McCaig shifts into a more standard set of superhero colors. It’s a genius transition that I didn’t entirely pick up on until my third read.

While I’m concerned they’ve boxed themselves in with an immediate introduction of Superman, all the positives neatly erase the slightness of the issue. If writers Green and Johnson can carry the philosophical bent of Kara’s narration as a stranger in a strange world into upcoming issues, Supergirl will be a welcome second-string Kryptonian title to Morrison’s Action Comics.