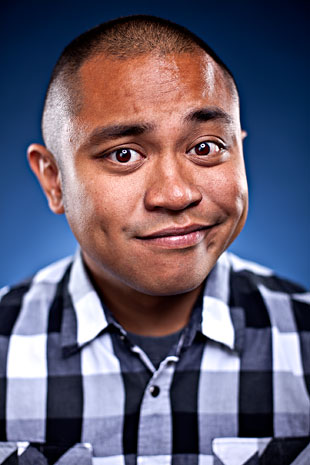 This week my #FollowFriday is Michaelangelo Ilagan – known to all corners of the Philly social media world as @mikeyil.

Mikey can be glib and ridiculous, but he also just gets it. Not just social. It. Being a unique person trying to connect with others who are both different and the same. Or, in Mikey’s more eloquent words:

Light is made up of a spectrum of rays in every color. People can be the same way.

I met Mikey at my first Social Media Club of Philadelphia meeting. It was the first day of summer camp all over again. So, being at least a capable, socially-climbing brand of wallflower in those situations, I located the loudest, most gregarious person in the room, and introduced myself to him.

I think you can see where this is going. Mikey was awesome and introduced me to all of his friends. Even after I wandered out of the radius of his conversation, I could still hear Mikey yelling “BOOMslam” repeatedly from across the room to an uproarious table of beer drinkers.

I assumed that – being the loudest and possibly most well-known guy in the room – that Mikey was a “cool kid,” and that would be the last I would see of him.

I was ever so wrong. About the seeing him part, I mean. He’s totally a cool kid. Two-and-a-half months later we jumped out of a plane together, and two years ago today we threw a 24-hour fundraising marathon together. Et cetera, et cetera.

Since then, Mikey has turned into legit Philly digerati. If there’s a social event, a special brand promotion, or a plugged-in conference, you are going to see him there. He also absolutely bristles with opportunities – he’s always working with a new company on a social promotion and hoping to spread the love around to the business, bands, and artists among his Twitter follows.

For all that, and more, he’s my #FollowFriday of the week – and he had a lot to say to me over the course of our interview!

@mikeyil: These days, I primarily use Twitter to connect with like-minded folk. These people are of similar mindsets, interests, and geography (or geographic mindset). I use it mostly to discuss my passions of Philly, food, technology and design.

@k: I think of you as sort of a “fast foodie,” in that you love good food but you also have favorite culinary delights at a number of chain restaurants. What’s with the fast-food fixation?

@m: I am not afraid to admit that I kind of grew up on fast food. My parents were new to this country, so all types of American food were kind of a novelty, a treat. People were a lot more naive about health concerns back then. Coupled with the fact that we were perpetually on the go, and I’m sure I was a brat being victim to 80’s and early 90’s marketing-awful-food-to-children campaigns, my parents were probably led to placate me.

@m: Fast-food has been a part of my life ever since. Granted, I’m wholly American and in a less-naive era, but fast food will always be something that I’ll have a strange obsession with. My tastes in food really do range from prince to pauper. I’m no snob about the half-a-Benji entrees I’ll sometimes throw my money at, but I’m also not afraid to admit I eat like shit sometimes.

@m: My favorites throughout the late 20th century: The Western Whopper and Rodeo Cheeseburger from Burger King in the late 1990’s. Taco Bell’s Enchirito which existed from 1970 to 1993, discontinued and then brought back in 1999. It’s still served. It’s a portmanteaux of enchilada and burrito, so that’s part of the reason why I like it, the wordplay and the dish itself. Hell, I love everything Taco Bell has pretty much ever made.

Lastly, I don’t actually like the KFC Double Down (too greasy, too much fried meat) but I enjoy it as a symbol of ironic, gross negligence and stubbornness in a modern era where self-responsibility is replaced by corporations being forced into a position where they can’t even produce products for people who actually have self-awareness and control. (Does that make any sense?)

@k: You refer to yourself as an “interactive designer,” but I’ve also come to know you as a photographer, writer, SM coordinator and even an event promoter. How did you amass these mad skills? And, do you see them as separate streams, or part of one big package?

@m: I see these skills as one big package. Sometimes I’ve got to apply a one-line label to myself. My LinkedIn simply says “Creative Professional,, my business cards say “Interactive designer, blogger, etc.”

I don’t like adhering to one medium, nor do I feel like I’m particularly very proud or exceedingly strong in any one department. I have a lot of skills, interests and creativity and I use them where I see fit. Design has been paying the bills for the duration of my career. Writing and taking pictures has given me creative outlets, and maybe some pocket cash. 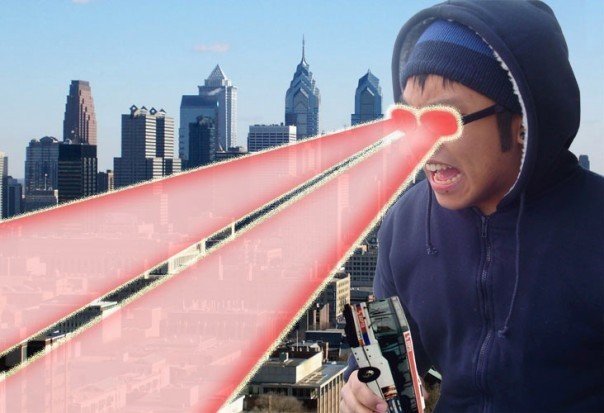 @k: Some of my favorite MikeyIl creations are your ridiculous photo manipulations; can you share a favorite and the story behind it?

@m: My favorite would have to be this [see inset]. I made that image of myself about eight years ago (note the lack of the Comcast Center in the city skyline). I was bored and in one of my many computer lab classes in college. While silly in essence, I believe I made it at a time when I was frustrated, overworked yet bored and just angry at the world. I decided to represent this visually and ridiculously. While not the best of my ability, I still find it hilarious to this day.

I’ve been using image manipulation software, particularly Adobe Photoshop, for about 13 years. Knowing the software has been key in my career, but it’s of course become a fun creative outlet too. In high school and college, I got into the habit of being a class clown making absolutely absurd photoshops. I don’t doodle or make cartoons, but I got to this point with Photoshop and pretty much feel that if I can imagine it … I can create it, or at least try really hard doing so.

@k: You write for Geekadelphia and have landed in the middle of some cool promo campaigns for brands like Ford Fiesta, but you use Twitter a lot to promote stuff you don’t stand to profit from at all. How important is it to leverage social media for social good?

@m: Short answer: it is an absolute importance.

Despite my snarky quirks, one of my core beliefs is doing good. If we spend five minutes out of our day to make somebody else laugh or feel good about themselves, or an hour giving somebody a lift to the airport or to move some furniture, give directions to lost tourists, the world would just be better.

What’s that have to do with social media? Well, it’s a communications platform and through separated by distance, we’re equipped with another channel to convey thoughts, ideas or simply positive messages to do good.

@k: What’s the coolest thing that’s happened to you because of social media?

@m: I have a ton of things to thank social media for… all the wonderful friends and acquaintances I’ve made in the past 2-3 years, all the friends I’ve gotten to know better through interacting with them consistently. On the job and gigs level, I can attribute social media to the opportunities that led me to Blame Drew’s Cancer, the Ford Fiesta Movement and anything Geekadelphia-related.

Amongst all that, I can indirectly thank social media for how I met my girlfriend Allie Harcharek (as we met through a friend I’d made through social media, Colin Weir).

@k: Who are your personal #FollowFridays?

@m: Rob Perdue (@rperdue), a friend I have Twitter to thank for. We met, hit it off in a very bro-y/geeky kinda way and I’m glad to have met him. He’s a cool guy and shares my interests in food, video games, and social media/online marketing.

There’s also Genna Delgado (@cuppycake11288) who I met recently. I believe she started following me because her employer, Jobspring Partners, an IT recruiter had “Twitter handles” as part of their office sign-in sheet. Ultimately this lead to her doing us a huge favor and securing a sponsorship from Jobspring Partners for our upcoming Philly Geek Awards. They bought a red carpet to be donated to the Academy of Natural Sciences to be used for this Geek Awards, future ones, and all upcoming events! She’s a rockstar and I’m glad to have met her!

@k: What’s your advice to a Twitter newbie? Let’s imagine that so far they’re only following @LadyGaga. Next steps?

Proclaiming “I don’t get it” isn’t an excuse when it’s absurdly utilitarian. Unless you’re very introverted, you usually have something to say to people, right? Just say something, not aimed to anyone, or maybe even yourself. Find and follow the people you know, the people you want to know, or the people who you think are interesting based on briefly scrolling their feed or reading their short bio/following their link. If you talk, people will listen.

For me, and many others, Twitter has been essential in getting to know people I wouldn’t have gotten to know at all otherwise, keeping up with friends that I’d otherwise be distant with, keeping up with news/media, etc. Through interacting, joking with, communicating, helping the people on Twitter, it’s opened up doors to freelance, jobs, all sorts of opportunities and most importantly: treasured friendships.

There you have it: Mikey Il in all of his bombastic glory. I hope I’ve convinced you his mix of fast food enthusiasm and constant networking is worth following.

Who is your #FollowFriday today?