You are here: Home / Personal / topics / thoughts / Are the bears sleeping comfortably?

I know all too well the February Funk I typically descend into each year.

You might not know it too well, because it involves me becoming a total shut-in for the entire month, totally cutting off all ties with the outside world – including blog ties. It is a special, wintry listlessness that let’s no ambition escape its grasp. The only thing that will sate it is missed rehearsals and hours of playing video games. It may cause me to  wear sweat pants for non-sweaty activities. It’s altogether terrifying.

This year I skipped it entirely. 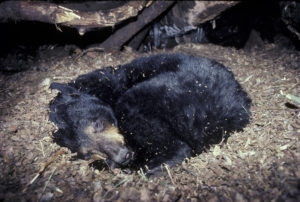 Unlike an extra layer of blankets, you cannot kick of your accumulated fat when it gets too warm at night.

I’m still not sure how I accomplished that. Maybe it was the weather? Philly never endured any bitter cold this February and we skipped our seemingly-annual snowpocalypse. On the whole it was uncannily springlike. I wonder if hibernating animals were all terribly disoriented by it. Like, were all the bears all rolling around in their sleep, thinking, “I am too damned hot in all these layers of fat”?

Whatever the reason, the only funk to be found this February was from the awesome music I’ve been playing.

Okay, that’s a lie. I’ve never played a lick of funk music in my life, unless you count screaming James Brown back and forth with Gina between songs at rehearsal. GET ON THE GOOD FOOT.

The real way I stayed happy and healthy for the month was by vastly, vastly overcommitting – but, in a way that didn’t put the whole burden on my shoulders. That path leads to Funk. We doubled Arcati Crisis rehearsals. I began editing my book in earnest for Writer’s Club. I started a sort of tentative search committee around forming a new cover band, which I haven’t even talked about yet, along with other insane undiscussed developments – joining the board of a local org, editing a new blog, mixing two EPs for bands I love, planning to play and iPod DJ a wedding – the list goes on.

One thing all the activity has in common? No isolation. Even book editing has the end result of being in a room with other people, talking.

It worked! I made it through February alive and decidely unfunky. Suddenly, it is March and I’m free, free from the stultifying confines of the dastardly February Funk!

And I am booked every day and night for the next four weeks. Some days I don’t have enough time allotted for dinner or the possibility of needing to use the bathroom.

Hey, if that’s what it takes to skip February Funk, count me in. I’ll take March Mayhem, as long as it doesn’t lead to April Admittance-to-Hospital-due-to-Exhaustion.