You are here: Home / consume / comic books / Crushing On: Chronicle 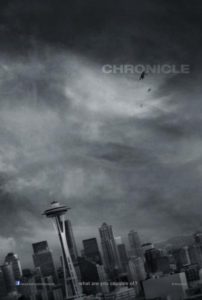 I love this minimalist poster. Beware – a more spoiler-filled version is displayed below.

This week I watched an amazing movie – and I almost turned it off after five minutes.

The movie was Chronicle, a $12 million small-scale superhero flick that just hit DVD after running in theatres earlier this year.

Why did I nearly turn it off? Two words: found footage.

On the list of cinematic tropes I categorically dislike, found footage movies rank consistently high. You know what I’m talking about. Cloverfield. Paranormal Activity. Ever since Gina and I saw the disjointed Blair Witch Project in the theatre I’ve held a special contempt for the contrivances of these flicks. You have to suspend your disbelief like whoa to trust that various characters would keep wielding a camera and talking to it through the challenges of the plot. As a result, a good story is frequently sacrificed to the lame cinematic device.

Also, there’s the shaky camera making you want to barf.

Lower on my list of trope no-nos – but still ranked – are superhero origin stories. Few superheros have origins so epic they should take an entire movie to tell. Superman, Spider-Man, Batman, The Fantastic Four – these are heroes whose origins have been shown in a few frames of cartoon theme songs. Do they really merit entire movies to explain? Rather than reimagine an origin for the umpteenth iteration across all media, why not show us a unique portrayal of heroism that only your movie can achieve?

Chronicle is a found footage superhero origin story, and I loved it despite myself and my list of loathed tropes. Like, raving on Twitter about it before it was even over loved it. E loved it, too. It hit a random rental grand slam in our house. 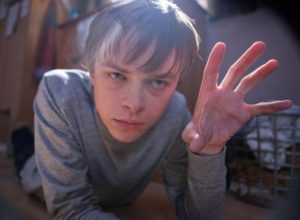 Let’s just say that the movie does not waste Dane DeHaan’s resemblance to Mark Hamill. Honestly, it gives the movie a bit of extra resonance.

Now, how to explain the joy of this flick without giving away all of its prickly twists?

Chronicle‘s excuse for being found footage starts out having nothing to do with its overarching plot. Andrew is a peculiar loner (and dead ringer for Luke Skywalker) with few interests, a dying mother, and an abusive father. He picks up a camera one morning and begins documenting his life – ostensibly to catch his dad’s abuse on camera, but secretly to analyze his day to find some meaning in life.

He doesn’t manage to do either. What he does is capture an inexplicable event and its aftermath on camera. Suddenly, he is recording a historic breakthrough in human potential – partly just to document it, but still to find some meaning in life.

The breakthrough provides meaning, but only to a point. Like a shiny new toy that eventually becomes a part of your daily routine, having a special power changes your entire world except for things like friendships, financial and physical well-being, and the general circumstance of your life … which is to say, it doesn’t really change your life at all until you start wielding it as a tool.

This realization is crucial to any good origin story – yes, you have great power, but what sort of responsibility will you take on along with it? The kids in this movie are no Clark Kent, Peter Parker or Bruce Wayne – they are typical, modern, bored suburbanites. Their first instinct is not to make the world a better place. Or, more accurately, it is only to make their own worlds a better place, and only in the most superficial and temporary ways. 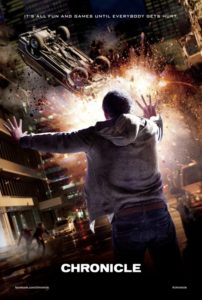 This is a bit spoilerific, but they made it a poster, so here it is

A chain of dumb teenage decisions leads to ever increasing conflicts until the movie reaches straight up Matrix-level heights of insane Superman-inspired tussles, except it wields them more smartly than either franchise ever has. A protracted fight scene at the end is effectively the best superhero blowout I’ve ever seen short of The Avengers. Low budget effects work lends the film a visceral, tangible heft.

So, Chronicle sticks the landing on the origin story. What about the found footage?

First, it’s not all that shaky. Second, there comes a point in the story where the main characters stop being interested or capable of shooting video of themselves, but by that point the filmmakers have built up several devices to allow us to believably track their story. The transition from intentional to unintentional recording barely registers. The way they record a particularly tense mid-air confrontation is ingenious both in concept and execution.

In the end, Chronicle is a solid indie super flick that explores what it would mean to have powers in the real world, where not every superhero is infallibly noble.

Would Clark Kent really decide to be a clumsy, mild-mannered reporter by day? Would Peter Parker so quickly shrug off the death of his uncle and be a superhero every night, even while trying to pass his classes and keep Aunt May’s house out of foreclosure?

Chronicle says: maybe. You’ll have to watch to understand why

(Thanks to Alex for recommending this one!)