You are here: Home / Personal / topics / thoughts / on unsolicited compliments, and how little girls should respond to them

I’ve written about the difference between me getting an unsolicited compliment and EV getting one, and about how she is not a princess.

What those two situations – and posts – have in common is me responding on EV’s behalf, which has been my habit since she was pre-verbal continuing through the typical two-year-old stranger-danger shyness. If someone reduced her to a pretty girl or a princess, I got the claws out.

Now I’m the parent of a three-year-old who is much more attentive to the sorts of responses I dole out, and who sometimes wants to respond (or, emphatically not respond) on her own … and I’m not sure what to do. It’s one of the few situations where I find that the difference in EV and my genders is making me unsure of my parenting decisions. 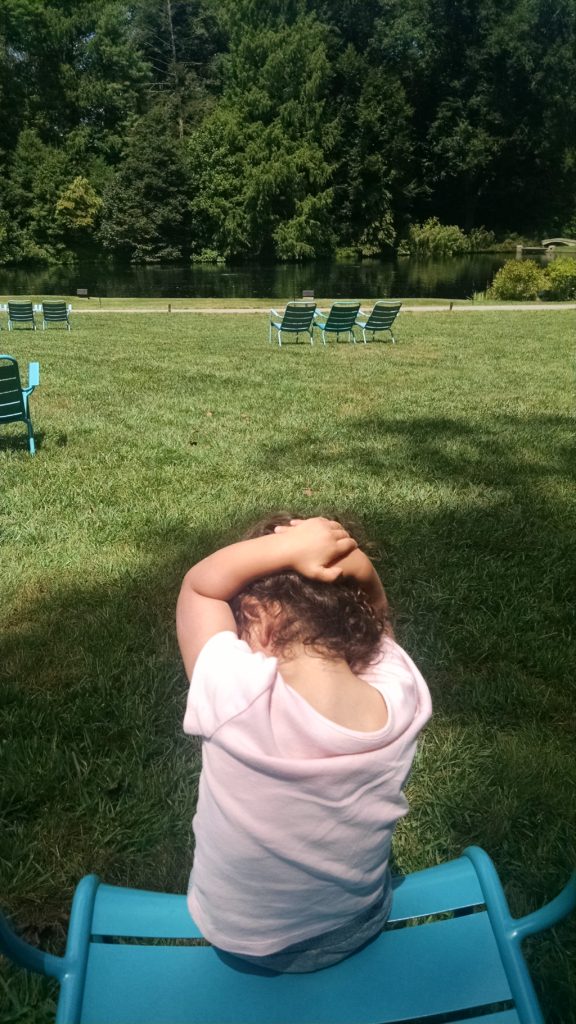 That’s a big deal for me. E and I were just discussing how relatively neutral our parenting style is when it comes to gender. Aside from wearing a bathing top at the pool and some undefinable level of unconscious bias, I don’t think EV has experiencing a remarkable different toddlerdom in this household than a boy would.

We restrict certain tough play and violence, just as we would from a boy. Aside from screening out toxic princess culture, it’s not as though we’re hiding anything coded explicitly for girls from her. E and I even present a relatively similar role to EV – she’s seen both of us do most chores and caretaking tasks. We both have fancy colored hair.

I’d say the big differences are that E will put her in dresses more often and is better at painting nails than I am.

Yet, this little issue of how (if at all) EV ought to respond to unsolicited compliments has stopped me in my tracks, while E has no hesitation contending with it.

I generally respond to any remark directed my way from a stranger so long as they aren’t physically threatening, whether it’s meant positively or negatively. That’s a hard-won ease for me, rather than a chauvinistic obliviousness. I went a long time assuming any comment I received would be a mocking one. I’ve been harassed from passing cars just for walking down the street and threatened with violence because I “talk gay.” I was a strident teen, but it took two more decades for me to own my self-image enough to withstand that. Luckily, society changed a bit, too. Now I look and talk however the hell I want with no apology.

However, none of my experiences compare to the near-constant sexualization every woman fields from every comment, whether its complimentary or mocking, no matter the gender of the commenter. And, while I’ve been threatened with physical violence, I’ve rarely if ever had to walk down the street with the specter of sexual violence haunting my steps.

That’s what I find myself up against when EV receives a comment from a stranger.

The first few times, I encouraged her to say “hi” in return or “thank you.” I immediately sensed the dissonance there and the bad precedent I was setting. No one deserves EV’s attention just for talking to her. She might develop a social contract that dictates reciprocity with someone she sees frequently, but she owes nothing to strangers.

Yet, I also don’t want to encourage EV to simply passively absorb these opinions. If one of them makes her feel positive or negative, she should be vocal about that. If she doesn’t care, she should ignore them.

Last week presented a pair of examples in a span of hours.

First, at the library, a pair of young black women were sitting across from us at the library while EV carefully fussed over a book and I filled out our card applications. After observing us for a minute and laughing to themselves, they both complimented EV – one to me, and the other to EV directly. I thanked and chatted the woman who spoke to me. EV didn’t respond to the other one. She seemed for a moment as if she might press it with EV, but then let it go.

That felt fine to me. The second example didn’t. We were at a home improvement store, coincidentally being helped by another young black woman. She had been with us for several minutes, and had chatted with EV about the projects we were doing without making any comments about her appearance. When we hit a snag in my shopping, she asked an older, white, male co-worker. He answered her in an annoyed, condescending way, and then turned his eye to EV.

I was only halfway absorbing this, as I was having my own conversation with the woman, who seemed slightly cowed by her coworker’s rude response. I don’t think EV was being especially shy. She was doing a silly dance in the middle of the plumbing aisle. It seemed obvious that she simply wasn’t interesting in engaging.

Yet, the man kept talking to her in an insistent, insincerely cloying way, pressing her from all angles to respond with increasing annoyance. At this point, I was tuned in.

“What did you do this summer? Did you go to the beach? Did you make castles? Did you bury dad in the sand? Huh, did you?”

I spent an agonizing hour on post-game analysis with E last week. Why didn’t I say anything? Why didn’t I indicate to EV she shouldn’t feel the need to answer?

I know what a sincere interest in my kid looks like from a speaker of any gender presentation. Not only have I learned to see it, but whether or not EV responds she always remembers the sincere people and brings them up later. This was not that. Maybe this guy was a father of daughters of his own, but he was also probably going to make a comment about the ass of the next women who walked down the aisle as soon as she was out of earshot. I could just feel it. (And, it’s borne itself out in the following days with no remarks from EV about the conversation.)

EV’s instincts were better than mine in that moment: she was absolutely right to keep on doing her silly dance and completely ignore this guy. But the point is she shouldn’t have had to.

That doesn’t just apply to leering older gentlemen. It’s for kind young women at the library, doting teens at the pool, and every other human being who wants to ascribe value to EV’s appearance and then tell her about it and then stand there expecting something in return.

She owes them nothing, and while she seems to already sense that on her own, it’s one good choice I’m not sure how to model and reinforce.