What a year! That meant for this post I had to go fishing for favorites not by that triumvirate of excellent women. The pickings are a little slimmer on the XY side of the fence, unless I want to go with laughing at Bowie and Jagger on “Dancing In The Streets.”

As I sifted through my music collection, I kept returning to this song, the sound of which evokes “80s” for me more than nearly any other song.

There’s something about the galloping bass and the plaintive melody of the chorus of “Everybody Wants to Rule the World” that still brings a positive swirl of butterflies to my stomach every time it begins. (Unlike their ponderous “Head Over Heels,” which still makes me sweat like a fever dream (seriously, I’m getting queasy just thinking about it).)

Maybe that’s because of the swirl of a two-note arpeggiated electric guitar riff that starts the song off fluttering in a major key before it settles into its two chord verse. 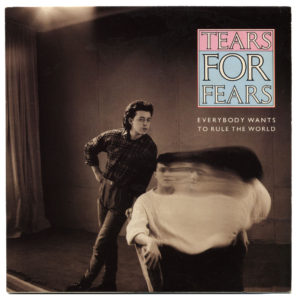 Whatever the reason, I’m always giddy and than the steady gallop of the bass brings me back to earth as Chris Hughes tells me, “Welcome to your life…”

There’s a dissonance between the cheerful D-major key of the verses and the ominous lyrics that suggest an ever-watchful big-brother. Only two phrases in the song begin minor – the start of each refrain, and the title of the song. Each time the line begins with Em, the minor second chord, rather than G, the major fourth (which is Em’s relative major).

(In fact, the bridge is approximately what an all-major chorus would sound like, replacing Ems and F#ms with Gs and As. That’s part of what gives it such an explosive, anthemic quality as it bursts from a chorus.)

I love that it’s a memorable song for a baritone-voiced man (and 1985 was a good year for them – it also gave us “Don’t You (Forget About Me).”) I also love its unmemorable guitar solo. There’s really nothing distinct or melodic about it that you might sing along to, but it’s a perfect amount of frantic rising action to create tension leading to the final refrain. 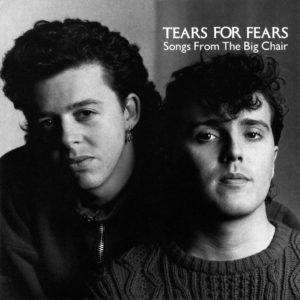 Then there is the simplistic melody of the chorus, sketching little wedges across the stave on the minor lines as it leaps over and steps down across the tonic, b/ e \b \a, only treating us to a walk across the D on the single major line.

Taken altogether these elements give the song a haunting, almost melancholic quality. The chorus feels like a sudden, paranoid rant cast against the big break to minor. The title has always suggested to me something more sinister about everyone wanting to the rule the world. (The original title was “Everybody Wants to Go To War,” which definitely merited the minor chord!)

“Everybody Wants to Rule The World” was Tears for Fears biggest hit. While it has the same looming dread quality of their other tunes like “Shout” and “Mad World,” all of those songs were methodical and rigid where “Rule The World” shuffles and gallops.

It’s all the dissonance that makes the song memorable – major vs. minor, looseness paired with dread. Rather than plod or hammer, the song is filled with dozens of tiny moments of resolution – something none of the bands other hits can promise.

I think that’s why I still get butterflies.