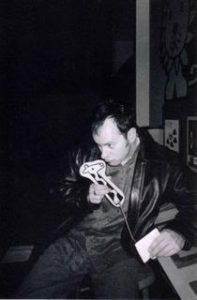 In 2003 Gina moved into our 44th street apartment and I was armed with my first set of serious recording gear. We were both writing a lot of new songs, many of which remain in our Arcati Crisis repertoire until this day.

I had stumbled upon a website called SongFight, which called out a random name for a tune into the void each week and then presented all of the songs written for it the next. (This is still happening today, by the way.) A few weeks after Gina came by to sing my first attempt at fighting, “Goodbye Monster,” she walked into my room, sat down, and played me “Moscow, Idaho” for the first time.

We didn’t win that SongFight, but I still think it’s one of the best songs ever written.

But, this isn’t about Gina. You see, through discovering SongFight, I discovered a massive online community of indie songwriters just like me – people who weren’t necessarily gigging out in bars and clubs, but who were holed up in their rooms recording each song they wrote – sometimes entire albums at a time.

I had found my people. And one of them, Frankie Big Face, was one of the best songwriters I’d every heard in my life.

This man could take any inane song title and tell you a story with it, breaking your heart a little along the way. With a voice like a hoarse David Bowie and songs that ranked from plaintive folk to Van Morrison 60s songwriter to synth pop, I was in awe of him. And he was just a regular guy – a high school music teacher and band director who lived within a hundred miles of me!

I loved (and still love) many Frankie Big Face songs, but none so much as “Locked Box,” which is like the secret best song Squeeze ever wrote but never recorded. It’s a song about a girl who is going through the motions while trapped in her own anxieties and it is catchy as hell. You’ve been warned.

The song comes with an awesome story. A handful of the most prominent and prolific SongFighters decided to have an album fight – an entire full length comprised of pre-determined song names, of which “Locked Box” was one. Frankie’s version of Smile If You Absolutely Have To is available to stream on Amazon or directly from his website (where he also provides the lyrics and lead sheets for all of his tunes). In fact, you can download “Locked Box” for free right now. Here’s another of my favorites, “Funny Enough For You.”

There is so much Frankie Big Face music out there for you to hear – he’s been writing at a pace much faster than mine for the dozen years since I discovered him, and recording exponentially more than I do. Honestly, I have about 10 years of his stuff to catch up on and am presently in a downloading frenzy to get it all into my iTunes.

Here’s his website’s discography. You can also check out his SoundCloud for more, including his interpretation of Beck’s Song Reader.