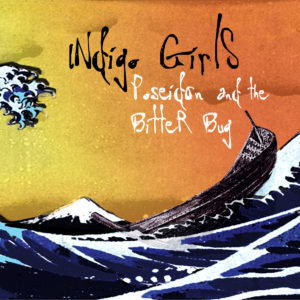 Being an artist has other implications in the commercial world, partially because there are costs associated with artistry. You may be a songwriter, but are you writing enough material to release full-length albums regularly enough that you won’t be forgotten? And, even when you do, will a likely-dwindling audience of tens of thousands of people like it enough to pay for it?

I don’t know how mainstream artists contend with all of those questions and still find the courage to make the art that drives them. I suppose that’s why you surround yourself with a team of managers and lawyers (although that’s a catch-22, since you have to keep making the art to pay for them to enable you to make the art!).

Somehow, despite all those odds, The Indigo Girls have continued to release some of their most vital, engaging work over the course of four studio LPs and a live album in the past decade. The live LP, Staring Down The Brilliant Dream, takes it name from this song, “Love Of Our Lives.”

(This acoustic version is from three years after the LP, but I think being able to see Emily and Amy trading the often unison octave vocals adds a lot to your listen.)

E taught me songs like “Least Complicated” and “Power of Two” note by note from her memory of many prior sing-throughs on long card rides back and forth in her little Corolla from her parents houses in New Jersey, young and in love.

This song flips that oft-told harmony-singing narrative on its head. We first heard “Love Of Our Lives” together in 2009, newly married (to the tune of “Least Complicated”!) and driving in our own car back on that same route with one window down and the wind whipping through our hair. We were equals as partners and singers, each naturally taking our accustomed parts (E with Emily, me with Amy Ray) and getting tangled up in each other as the two vocal lines merge back into a unison melody.

Fire and water, oxygen
Scotch and soda, or any combination
Starts the reaction.

Is there no mastermind of modern day
Who can blueprint a plan to make love stay
Steady and weatherproof usher in a new revolution?

I don’t know how are these two women writing such stunning statements of words and melody over 20 years into their careers, but I’m incredibly thankful that they are. I have so many favorite songs that remind me of the early milestones of our relationships, but this one will always remind me of the strength of us together.

After trying more, the hopeful ones still try.
How can we help it when we’re fighting for the love of our live?

(Also, a fun fact: “Love of Our Lives” include both of my favorite little marks of songwriting, the word “communication” and a reference to chemistry. They’re like the sigils of my and Gina’s respective houses, and also map onto Nathan and Martina in my novel. In fact, I’d say this song is specific inspiration for it, but to explain that much further would be a spoiler ;)