You are here: Home / consume / comic books / From The Beginning: WildStorm Universe – Deathblow #10-12 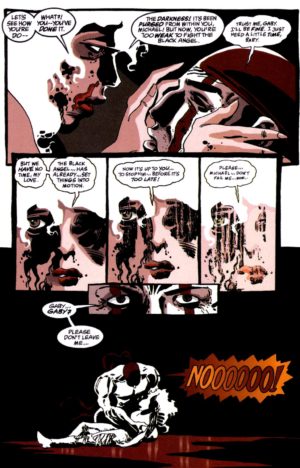 The first twelve issues of Deathblow are about how anyone can decide to be a hero but no one gets to choose the kind of hero they get to be.

Michael Cray is a mercenary – maybe the most-efficient and cold-blooded mercenary of all of Team 7. He just wants to be dropped into places where he can remove bad men from the world until he, too, shuffles off of this mortal coil.

Fate has something different in store for Cray and for his ex-wife Gaby, Sister Mary, Faisal, Grifter, Backlash, and Dane. They all get to be heroes in this story, but none get to walk the straight path they intended.

I should mention that this story “doesn’t count,” in that all but one or two of its bloody outcomes are reversed by the final page of Deathblow #12. I really hate stories that don’t count, no matter how cool they are (which is why I have so much trouble with DC Comics … but that’s another post entirely).

I didn’t really hate Deathblow. It’s disappointing that Jim Lee and Brandon Choi couldn’t conceive of a story with stakes this high that could stick, but Deathblow himself is changed by it and maybe that’s all that matters.

At times I thought I was bored with the tale, but each time I was almost lost Choi and Sale brought me back with an awesome moment. Travis strips Sister Mary of her plethora of weapons. Gaby melting from angelic host to human right before Michael Cray’s eyes. Famine and War casually striding across New York City landmarks. 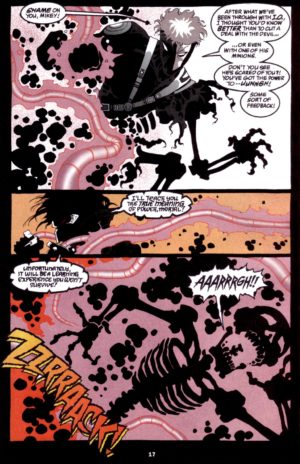 Despite Deathblow being rooted in Team 7 machismo and Jim Lee’s awesome specimens of human biology, at points Sale and colorist Linda Medley are pushing its visual identity into territory like Sin City, Hellboy, or even Sandman purely through the power of their bold, minimal artwork – which allows them to shock us with panels like the colorful entry of the Team 7 calvary at the end of issue #10.

Then, Sale performs his best magic trick, turning Grifter, Backlash, and Cray into beautiful modern art on the page in issue #11 as they square off against the Four Horsemen of the Apocalypse, and then with the Black Angel himself, until Michael Cray is the only thing left between this world and the apocalypse. 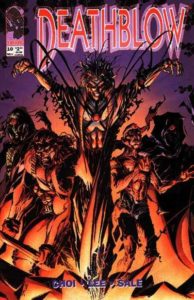 Before we can get there, Cray needs to have his reckoning with Travis in Deathblow #10, his former operator who was secretly a serial killer.

This is the one facet of the plot that I couldn’t get behind. The idea of Herod, a methodical killer only after the special children who might make a difference in this world, is the sort of hook you could hang an entire title on.

To see him get tossed away as a mini-boss in this saga while the issue reached a crescendo with the introduction of the Horsement felt like it wasted all of the subtle build-up to his reveal as a villain, even if he proved to be the climax of Gaby’s plot. Choi had the perfect chance to reset his capture with the big rewind at the end of the story but left his plot neatly resolved for the moment. We’ll see if there’s anything as good in store with the next arc. 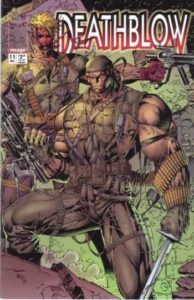 hen, in Deathblow #11, the core surviving foursome of Team 7 spread out across the city to try to intercept the Horsemen.

This is not your typical good vs. evil, love vs. hate sort of fight (not that anything in Deathblow has been that). Grifter, Backlash, and Dane aren’t good men who fight for right. They’re also not exactly the four most-powerful characters we’ve met so far in WildStorm. Yet, they share Cray’s theme of trying to
find a way to remain heroes no matter how twisted their lives become. They each get their trademark moment of cool, but seem to be no match for their supernatural foes.

However, Deathblow manages to overcome Death himself by simply shattering his Seal of the Apocalypse. Of course, he uses his special Sword of Heaven to do it, but maybe the other members might have a shot using their Genesis powers? 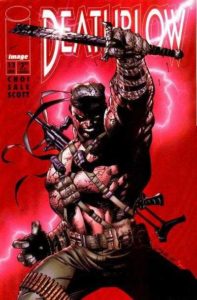 Everything goes to hell in Deathblow #12. The Team 7 men each eliminate their Horsemen but each pay an awful price for it. Deathblow and his rag tag team of cops and holy men storm the top of the World Trade Center only to be methodically cut down by the horse of demons there (even after Faisal turns out to be the Archangel Raphael, who does a doozy on the Black Angel).

Then, just as Deathblow is about to succumb, the ragged remains of Team 7 storm the roof only to be disintegrated by the Antichrist … but, it’s just the opportunity and inspiration that Deathblow needs to make his, erm, well, his deathblow, if we’re being honest.

Cue the massive rewind using the energies the Black Angel siphoned off of Christopher. The boy funnels them back into the very fabric of reality, ironing out the tens of thousands of ripples caused by the Black Angel’s machinations going all the way back to the Baghdad plot in the initial four issues.

One thing he cannot correct is Gaby’s death, as really she had been dead for two years now while acting as the host of an angel. Christopher just doesn’t have the juice to iron out the kinks that far back. It sucks to see the one real female character in the series triple-fridged (her original death, he death in #11, and then her death sticking in #12) to literally absolve Michael Cray and give him some closure. As with Herod, it seems like we could have a more interesting series with her alive.

Despite my frustration about taking my favorite two supporting characters out of the story, therein lies the answer to why this isn’t a typical “it doesn’t count” story. Sure, all the world-shattering consequences were reversed, but all that things that broke Michael Cray remain in place. All of the personal consequences of his journey from dying mercenary to an absolved man remained consequential – maybe even moreso considering how the rest of the world around him and Sister Mary stayed relatively the same.

I just hope that an amazing story comes from it, because in giving away their rewind button Jim Lee, Brandon Choi, and the departing Tim Sale made sure that Deathblow can’t ever go back to being another book about a merc. Now Deathblow’s mission comes with a capital “M,” and it has to move on after this spectacular mic drop of evocative, challenging, actual art from Sale and Linda Medley.

Here’s the schedule for the rest of this month’s WildStorm re-read. Tomorrow we’ll finally learn the mysteries of Team 7 with their first eponymous miniseries (and then on to post-Lee WildCATs, the 2nd arc of Wetworks, and Warblade miniseries plus a Grifter one-shot!)