As a kid who only knows the TV as something she gets to enjoy once a week, her version of on-demand entertainment is demanding E or I to sit on the couch with her for two hours or more each day reading books. We have to have several dozen books in the rotation at any given time lest she latch on to one too strongly and drive us completely out of our minds.

EV loves reading so much that she now appreciates reading books about reading. Two of her favorites of late are The Incredible Book Eating Boy (yes, really, no hyphen) and A Child of Books, both by Oliver Jeffers.

One is a favorite snack, while the other is just empty calories. 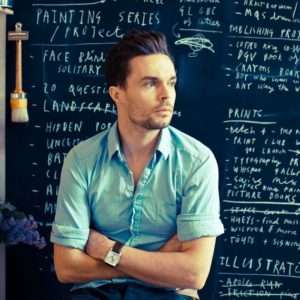 A Child of Books: CK Says:

Oliver Jeffers cares about the power of stories. Not just their ability to occupy and transport us, but their ability to sustain us and help us weave the reality with which we surround ourselves. In his books, words and even letters have magical, tangible powers. 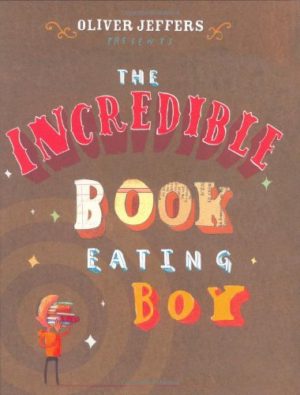 The Incredible Book Eating Boy is a literal take on how books can nurture us. In it, young Henry (who bears a passing resemblance to Doug of NickToons fame) is reading a book while licking a popsicle and gets his hands crossed, leading him to munch on a tome. It’s not half-bad, and he discovers that in addition to filling his stomach with sustenance they also instantly fill his brain with knowledge.

Books aren’t too much more expensive than groceries, so Henry’s dad doesn’t mind his new habit at first. Henry delights in every genre of book, but he likes red ones the best. It’s only when his ambition to become the smartest person in the world leads him to get overfull of books and his speech turns to nonsense that they get concerned. Plus, they’re faced with a tremendous library bill! Henry has to wean himself back onto broccoli, but he’ll always enjoy a much of a hardcover from time to time – as evidenced by the die-cut bite-marks on the back of the book!

The Incredible Book Eating Boy is my favorite kind of whimsical book for kids. It’s silly without being about breaking rules or lying – the fantasy of its silliness is perfectly clear. Despite being relatively sparse on words, it tells a rich, involving story via its illustrations. There’s enough there to significantly embellish the story, if you have a little one that allows you to go off-script. 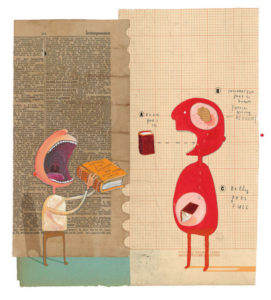 It’s also full of visual depth. Each illustration is on a reclaimed piece of previously-printed paper, leaving many fine details to make out even on the umpteenth read. Also, a few diagrams (one of how he digests the books, another of his growing nausea from overeating) consistently produce giggles in our house.

The best part of it is something less tangible. Beneath its silliness, The Incredible Book-Eating Boy is about the inherent goodness of books and intellect. Henry gets addicted to eating books not just because they taste great, but because they fill his mind. At first, he wants to be the smartest person in the world just because he can achieve it.

Later, when his brain turns to mush, he really misses all that information not because he liked being right, but because he liked knowing things. It doesn’t matter if it will take a lifetime for him to relearn all that he acquired from book-munching – he’s ready to dedicate himself to it.

I don’t think there could be a better message in the world right now than the idea that intellect is important and worth hard work. 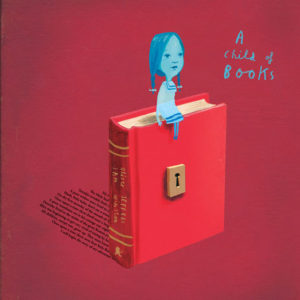 A Child of Books takes things further, suggesting that we construct our entire worlds from the stories we read.

The book is packed with eye-crossing tricks of typography, with Jeffers taking the text of famous public domain novels and twisting it into oceans and mountains to create his illustrations. You’ll recognize excerpts from Alice’s Adventures in Wonderland, Peter Pan and Wendy, and many others.

Due to its literary pedigree, I’ve seen this on a lot of recommended lists – Mother of Krisis even planned to buy it for EV! 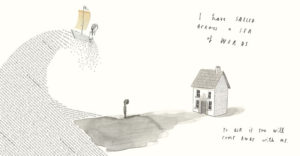 While it’s a visual marvel for adults, in my experience Child isn’t very sticky for little ones. It’s not a story so much as a brief, free verse poem about liking stories. That makes it a very quick read – for us, not even long enough to be a bedtime book.

You’ll almost certainly be eager to linger over all the twisted typography in the background, but I’ve found my toddler isn’t all that enamored unless I begin to read the stories to her. Unfortunately, not all of the illustrations lend themselves to reading – and, even those that do only contain brief, famous paragraphs.

(If you find yourself wanting to buy the book purely for the typographic illustrations, check out Litographs, and entire website of literary illustrations. I adore them.)