You are here: Home / consume / comic books / From The Beginning: WildStorm Universe – WildCATs #8-9 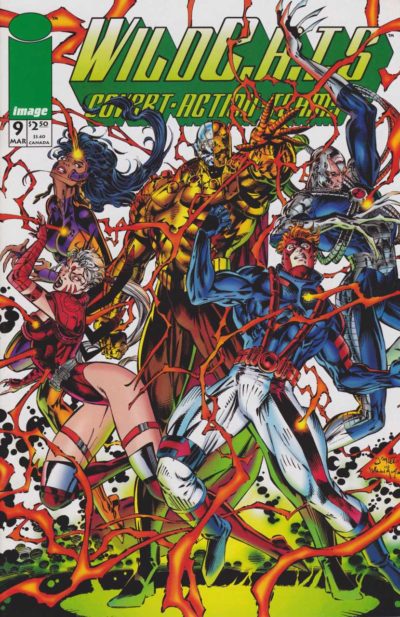 Issue #8 slams the breaks on all the action so we can finally see these characters’ personalities develop. It’s not too effective considering they break into the obvious chunks – the already awesome Grifter/Zealot, the boring as dirt Warblade/Maul, and the slightly interesting Spartan/Voodoo AKA what if Cyclops was more of an unfeeling automaton and really did get with Psylocke.

The sad truth this arc brings to light is that WildCATs simply isn’t stocked with the right characters for good chemistry. I’d suggest that maybe I’m just not in the right mindset to appreciate early Image, except Choi is killing it on Stormwatch issue after issue!

The difference is all down to archetypes and how they are balanced.

Stormwatch certainly has them (the strong female 2nd-in-command, the huge and cheerful foreign tank, the taciturn Russian), but it also has the decidedly non-stereotypical Battalion as a point-of-view-character and relies on real-world intrigue blended with its fantasy. There are not one, but five bland, energy-projecting dudes that I cannot always tell apart, but they exist in the service of the story.

WildCats is a team that’s as deliberately-balanced as a football squad when it comes to powers (energy projection, psychic, strength, sharp bleedy things, guns). In terms of personality archetypes, there’s hardly anything to work with as we hit issue #8 (#12, if we count Trilogy and Special).

We have a lot of information about the complex relationship between Zealot and Grifter, and a hint of tension between Voodoo and Spartan, but little else to go on. The book continues to flatline whenever Grifter and Zealot aren’t on panel (and these issues give up Grifter in the opening pages so he can star in Kindred). The Spartan romance subplot is especially clunky because the book does such a bad job of defining just how sentient Spartan truly is.

What does work here is the streamlined plot – a single villain with a singular beef with Jacob Marlowe. Choi writes Lord Entropy like rogue fencepost that a tree grew around, where that tree is the modern world. He’s not the most interesting antagonist, but his actions raise the question – where are all the other pureblood Kherubim that didn’t wind up Coda like Zealot? Lord Entropy is one, and he’s got a twisted history with our Jacob Marlowe AKA Lord Emp. We’ve yet to meet any others, but even if they definitively lost the war there are bound to be a few.

The back-up tales in each book are a welcome chance to add depth and breadth to Voodoo and Warblade, respectively. Voodoo’s tale comes off more as a continuity-fix on her changing costume and attitude towards entering the fray. Warblade’s story does less plot heavy-lifting, but accomplishes more as a character piece.

Unless you are going all-in on a WildCATs re-read, I don’t think you need to pick up these issues. Perhaps I’ll be proven wrong later if Lord Entropy becomes a bigger plot point, but it seems like you could simply skip to the next arc or substitute The Kindred here.

Want the full details? Keep reading for a deeper breakdown of the plot. Here’s the schedule for the rest of this month’s WildStorm re-read. Though Grifter departs here for Kindred, before we get there we’ll read Union #1-4 and 0 tomorrow.

Need the issues? These issues have never before been collected! For single issues – try eBay (#6-8) or Amazon (#8 & 9 or 8 & 9 (try both)). Since further WildCATs series hit these same issue numbers, be sure to match your purchase to the cover images in this post. 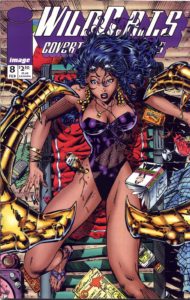 WildCATs #8 continues Grifter as the opening point-of-view character for an arc, as did #5 and a portion of #1. He and Zealot are “having a few brews” and playing pool in a neighborhood dive bar, because we can all imagine Zealot kicking back and relaxing in such a fashion.

After losing a game and spending some time beating up drunkards with Zealot, he gets a one-word page (a page!) – “CYBERJACK.” He sees it and tries to depart immediately (for Kindred #1), but not before Zealot reels him in for a fierce kiss. 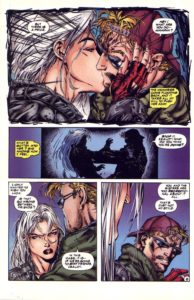 Oh, I didn’t know it was like that between them.

Not far away at a party in SoHo with Warblade, it turns out Maul really likes modern art. There are pages devoted to their repartee. Pages. The one interesting takeaway is that Maul is actually a normal spindly geek when not hulking out – or, at least, that’s the version of himself he chooses to display with his image inducer.

Meanwhile, Spartan and Voodoo are enjoying a cruise near Bermuda (with a small, hair chaperone in the form of Jacob Marlow). They playfully rib each other about their silicon parts while the actual Cyclops and Jean Grey look on. (Seriously: Lee draws them recognizably, and they’d be on their honeymoon about now.)

It turns out our pair of WildCATS are on a mission that was precipitated by Marlowe’s business call in the prior issue. Spartan and Voodoo are on the boat to keep an eye on it, after its sister-ship disappeared into thin air.

Marlowe interrupts the pair of them just as they were about to have an intimate moment, but their banter with him doesn’t last long – a swirling vortex of energy appears in the sky and begins to swallow up the ship piece by piece!

Back in New York at WildCATs HQ, the same disruptive energy also causes Void’s psyche to crack, though through the pain she knows that Marlow is in danger. Zealot scoops up Maul and Warblade from their night on the town sans Grifter. 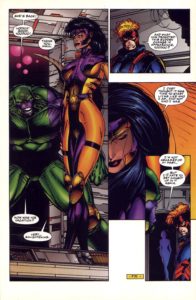 Elsewhere, in a dark and formless place, Marlowe, Spartan, and Voodoo pick themselves up from the ground to be greeted by Lord Entropy, who seems to have a shared history with Marlowe.

The B-Story is an insert that fits after WildCATs Trilogy #1, explaining Voodoo’s new and slightly more-demure costume.

Voodoo is briefly on leave from the team to enjoy a carefree night of exotic dancing with no guards or backup. Of course, the half-disintegrated Coda who tracked her back in issue #1 is there. Voodoo somehow manages to out-maneuver her, which I suppose we can chalk up to her psychic abilities, and eventually tricks her into impaling herself on her own weapon. She returns to the team with slightly more clothes on.

This does make an amount of sense, if you consider Voodoo had just been through the somewhat harrowing experience of WildCATs Special and may have been doubting herself and the danger of her new life. Her facing down the Coda sister solo helps inform her more willing badassery in the following stories.

WildCATs #9 opens with Zealot, Maul, Warblade, and Marlowe’s assistant Jules monitoring the waters of the Bermuda triangle to try to locate the newly missing ship. 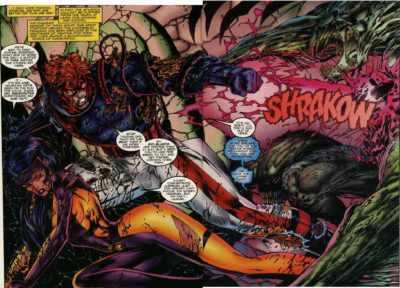 At that same moment in the dark place, Spartan is doing his best to hold off a horde of Daemonites who are carving him to pieces … but, it’s not real! It’s a special psychic torture Lord Entropy manages to install into his android brain via reality-bending powers.

Apparently, way back in medieval times, Lord Entropy and Marlowe as Lord Emp were both literal Lords, who were sieging a castle where Entropy’s wife was held hostage. Entropy wins the day, but he blames his wife’s death on Marlowe – though we’re not sure how, since Marlow cannot recall it.

In New York, Void recognizes Entropy’s powers as a manifestation of an Orb like the one that created her. She ports to the Bermuda Triangle to joint he others in their search, where she drops this crucial knowledge:

In the future, a great war was fought between the forces of good and evil. In the final battle, the champion of light, Omnia, was defeated and her life force was shattered, with shards of her essence scattered throughout the space-time continuum.

Over the millennia, many of them have reappeared on Earth in the form of shooting stars. Upon impact, the shards often took teh form of a glowing stone, an ORB, with each one possessing a unique aspect of the disembodied whole. Throughout the course of history, a number of these powerful orbs were discovered, and while some humans utilized them for good… others used the orbs for evil.

Using her affinity for other Orbs of Omni, Void shows them that Entropy’s lair is high above them and invisible to radar. The team infiltrates the floating structure to find it is disturbingly squishy and organic – and it’s absorbed many of the unfortunate passengers of the cruise ships it keeps swallowing up. 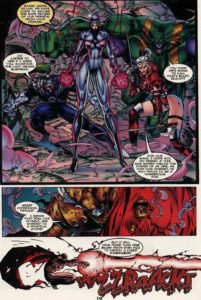 Marlowe has recovered his memory of Entropy’s wife’s death and tells it like it is. Or, rather, was. A Daemonite hopped from the body of their slain foe into Entropy’s wife, but he couldn’t bring himself to hurt her to disable the beast even after it sapped his life force with a magical sword …so Marlowe did it for him.

Basically, Entropy’s version of events is pretty accurate: Marlowe murdered his wife. He just happens to have glossed over the Daemonite possession part. He decides that’s still good enough reason to kill Marlowe, but is interrupted by a rare show of aggression byVoid, who arrives in the nick of time with the rest of the team to blast him across the room.

Don’t worry, her competence doesn’t last too long – she’s quickly blasted back and sent sprawling, as is her purpose in every WildCATs story. Voodoo distracts Entropy from disassembling the rest of the team by psychically impersonating his wife, which gives Marlowe enough time to fuze with Void to blast him into oblivion.

Later, back safe in Manhattan, Marlowe decides to take some time away to think… about what exactly? Has Entropy unlocked other memories? We don’t know, but he’s leaving Void and Spartan in charge.

I’m sure that will go well.

The Mariotte/Charest back-up feature is a brief tale of Warblade hunting Daemonites but finding an orphaned child in their wake. It does a little bit more for Warblade to see his inner monologue during a solo mission than it did to see him hysterically hunting down Misery for six issues, even if the tale is inessential