You are here: Home / consume / comic books / Thor: God of Thunder by Jason Aaron Omnibus – The #53 Most-Wanted Marvel Omnibus of 2017

Thor: God of Thunder (2012) featured line art primarily by Esad T. Ribic and color by Ive Svorcina (with Dean White), with letters by Joe Sabino. It also featured art by Nic Klein, Dan Pastoras, and Agustin Alessio and line art by Ron Garney and Emanuela Lupacchino (both colored by Svorcina). 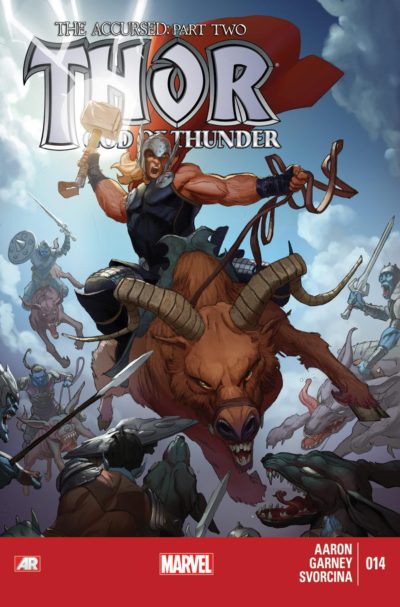 The question from there is whether this book would end there, placing all of the subsequent Lady Thor material into a second volume, or if it would mimic the Guardians of the Galaxy by Brian Bendis Omnibus by pushing through Secret Wars to collect Thor (2014) #1-8 & Annual 1 and Thors (2015) #1-4.

The answer to that question may depend on how much longer Aaron’s Thor run is set to continue. It’s currently up to 18 issues of Mighty Thor (2016) plus another five of the Unworthy Thor (2017) mini-series starring the Odinson.

Can you read it right now? Yes! All of these issues have been collected into three formats – initial “Premiere” hardcover, paperback, and oversized hardcover collecting two of the PHCs/TPBs each.

Visit the Marvel Now Section of the Guide to Thor for links to every possible format.

Also, the entirety of  is available on Marvel Unlimited – Thor: God of Thunder, Thor, and Thors.

There have been many good Thor stories since his introduction in Journey Into Mystery #83 in 1962. Yet, up until a few years ago if you asked any fan about the one defining, must-read Thor story, they would have the same answer: Walt Simonson’s Thor.

That is no longer the case.

Jason Aaron’s run on Thor, which began after Avengers vs. X-Men at the end of 2012, is altogether remarkable. It’s not just the length – still ongoing as we near the five year mark. It’s not just the quality of his artist collaborators, although Esad Ribic and Russel Dauterman both turned in career-best work, with interiors matching and exceeding the quality of their covers (along with colorists Ive Svorcina and Matt Wilson, respectively).

It’s that Aaron seems to understand how to push Thor and his mythos into exciting, unchartered territory that still feels very much a part of Thor’s story. And, like Simonson before him, he dissects Thor, his godhood, and his heroism in the course of his run. 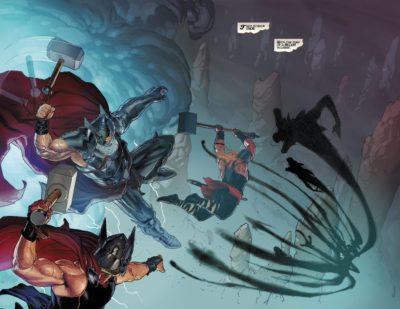 The opening mega-arc of this run proves that point. “Godbutcher” is a year-long, brutal murder mystery fractured across a trio of time periods occupied by a trio of Thors.

That sounds more like a plot for the X-Men or the Fantastic Four than Thor. It’s the sort of plot that usually involves a lot of retcons and futures of spurious possibility, but Aaron never lets things get that messy.

Thor is definitively Thor throughout all three timelines, and there is a reason he hasn’t been pursuing the Godbutcher non-stop since his youth just as there is a plausibility to the old, one-eyed Thor wandering the empty hauls of Asgard as the last living god.

Despite the arc’s singular focus, Aaron still manages to delicately foreshadow future developments. Afterwards, Thor returns his godly attention to his domain of Midgard AKA Earth. He reconnects with Jane Foster and befriends an agent of SHIELD’s environmental taskforce even as Makelith begins a bloody rampage through the seven other realms.

It’s such a clever turn – embroiling Thor in a battle against evil seeping through the many realms while drawing a parallel to the pollution and corruption ruining Earth. Aaron plays out the theme in the present day, resolving plot threads from as far back as JMS’s 2007 run on Thor, as well as in the future, paralleling the action with the aged god king Thor. 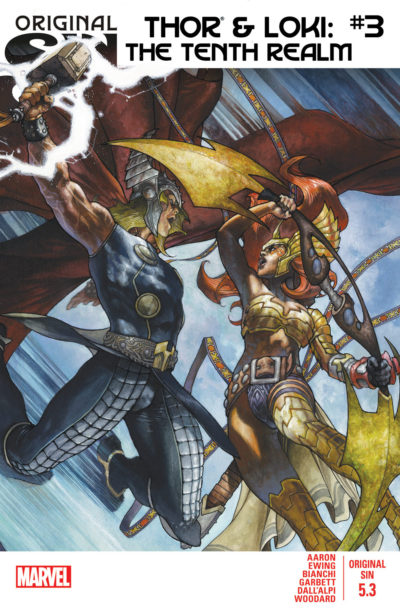 The five-issue Original Sin arc is amongst my favorite stories of Marvel Now, giving us the thrill of a Thor and Loki team-up and introducing the twist of Angela into Marvel’s established Asgardian mythology. It continues to a many-artist jam issue in #25, which ends this initial run.

I was guardedly optimistic about Thor (2014) introducing a woman wielding Mjolnir as being a brief, attention-getting mystery rather than a compelling story.

It was anything but that. The mystery did not last long, yet the story has permanence and is still running – in no small part due to how Aaron is writing this new Thor.

She was brash and headstrong in her actions, as if the hammer and mantle of Thor were egging her on, but at the same time skeptical of her new power. This is contrasted with the OdinSon, still present, but now shaken by his sudden unworthiness as he still endeavored to defend Midgard.

She also has a more mortal reason for her heroism. Some readers found this to be a barrier to enjoying the character – that a mortal woman has to be weak to be a hero.

Yet, this aspect of heroism has always been central to Marvel’s heroes, stretching back to the disabled Donald Blake tapping his can into the ground to summon Thor.

I’d invite you to read the run and decide for yourself. 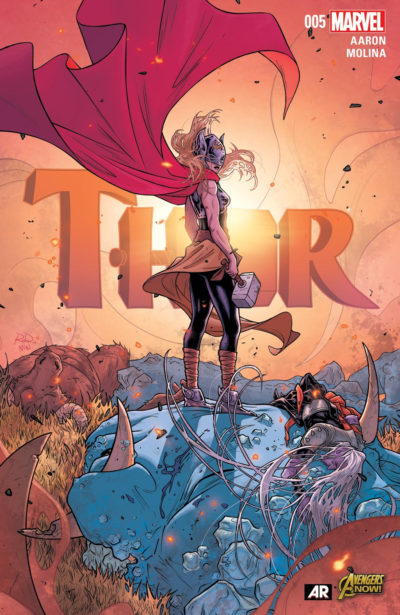 Honestly, it’s insane to think we didn’t see the omnibus solicited for 2017 to support the Thor: Ragnarok film. The only possible reason to delay is Marvel’s waiting to see just how Aaron’s run will end, given that they’ve already eagerly moved on from oversize hardcovers to omnibuses on recent series like Guardians of the Galaxy, Ms. Marvel, and Deadpool.

I sincerely doubt that Aaron’s plans will include more than another year of Thor (although, I’d be happy to be wrong!), and I suspect that Marvel would capitalize on the industry hype around the end of his run to market a first omnibus volume.

Would I recommend buying it? Yes!

This initial part of Jason Aaron’s Thor run was unquestionably amongst the very best books of Marvel Now – an “OMG MUST READ” even for folks who have never read Thor before.

Taken as a whole, Jason Aaron’s Thor might be Marvel’s only true epic since the end of Avengers vs. X-Men – and that’s a long dry spell. By keeping Aaron on the character and having his story persist through reboots, we’ve had the ability to grow and change with Odinson and Lady Thor over the course of five years, which in the scope of modern Marvel runs feels like an impossibly long time.

Even if Aaron doesn’t entirely stick the landing (and some aren’t happy with his “unworthy” reveal), it will have been worth reading this run.