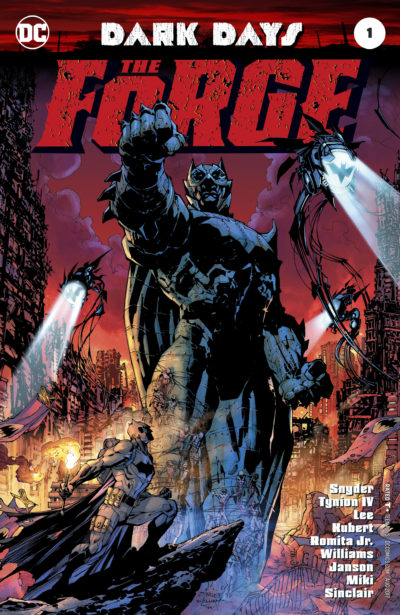 He isn’t the only one in the middle of an investigation. Hawkman recounts an unending life of reincarnation as he ponders the mysteries of the Nth Metal. And, Hal Jordan is assigned by one of the Guardians of the Universe to investigate an Earthbound mystery – and it’s no coincidence that the mystery is deep below Gotham City.

These three stories are intercut throughout the issue, with each of three artists touching each plot rather than them getting one a piece. The divided art chores aren’t as distracting as you might thing. At points some of John Romita Jr.’s art sticks out for being a little pokey and badly proportioned, but it was several pages before I really noticed that. Also, the inks on Andy Kubert don’t approach the Lee/Williams level of fussiness. Neither stops this from feeling like a cohesive read. 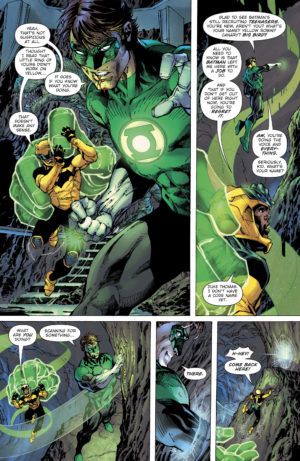 No spoilers on that here – you’ve got to read the issue. Suffice to say that Jordan’s discoveries in the depths of the Bat Cave connect both to recent mysteries and decades-old DC lore.

The most confusing element is probably the second character in Jordan’s tale. Duke Thomas is the last Robin standing after the entire city of Gotham joined forces in a Robin-themed resistance and Batman’s current pseudo-Robin in training.

I’ve read a lot of the runs that introduce him, but he’s not really explained here past Hal Jordon mocking him a lot, so a newer reader could be forgiven for not understanding why he’s in the Batcave. Also, I had no idea about Thomas’s mother, or how she connects to other DC history, so a one page interlude about the Mortal Men in Philadelphia went totally over my head.

At first I was similarly puzzled by a brief Mister Terrific appearance, but that was mostly because I didn’t recognize him – plus, we get plenty of context on his role here. Same for a brief appearance from Mister Miracle.

(Also, I have no idea what Batman unlocked from two of the three secret boxes we see in this issue, but I assume we’ll get to that. If you need immediate answers, the second of CBR’s two-part annotated guide to the issue is helpful – Part 1 and Part 2)

As for why the issue is called “The Forge”? A forge is where metal is heated so that it may be shaped. Nothing about this issue felt like it was especially focused on heating things up to change the nature of the shape of the DC Universe. I think the promotional cuteness of prefacing an event called “Metal” with an issue called “The Forge” got the best of them.

The one questionable choice here is that part of Hawkman’s meta narrative seems to imply some sort of mystical bat connection that dates back to the earliest days of humanity. Marvel already thoroughly messed up Spider-Man with similar malarky. Batman’s origin has proven to be relatively durable when it comes to being shaken up by retcons, so I suspect this will probably turn out fine.

Dark Days – The Forge is very much a first chapter focused on set-up, so there’s a limit to how intensely satisfying it can be. It had the job of framing a massive mystery that will have universe-wide implications, and I think it did the job just fine. It’s clear the scope of this story is going to get even more massive before we reach the main event of Dark Knights, all while pulling in a number of connected plot threads that stretch back through New 52.

Previous Post: « work duration vs. work effort, and walking the (productivity) plank
Next Post: Song of the Day: “Love Me Down” by Jason Derulo »