I have caused two things to explode in the past month of living in New Zealand.

I feel pretty good about that number. It could be much higher.

For the record, I am not trying to blow things up. I do not have any hobbies related to detonations. Take note, current and future rental property managers!

What I do have is a house full of our American electronics, very few of which operate on the voltage and frequency that emerges from the wall in a typical house in New Zealand.

The world has four or more standard kinds of electrical outlets, depending on how you’re counting the combinations of the shape of the plug, the voltage, and the frequency. This is a fun fact that most people usually only encounter on vacations.

Of course, on vacation your entire inventory of electronics that draw power from a wall (rather than by the now-ubiquitous USB) might be limited a laptop and an electric razor – both of which can typically handle power differences if you pick up a cheap wall adapter at the airport.

It’s a different story when you move all of your electronic possessions to a new country. Every piece of electronics you encounter while packing yield’s another Sophie’s Choice.

Do you want to give up your favorite reading lamp and have to spend time and money to buy a new one in a country where everything is expensive?!

Or, do you want to pack and ship your lamp and have to power it with a power converter or transformer for the rest of its life? Power converters and transformers are appliances that are about the size of a toaster oven but ten times as heavy. They invariably have something like 23% one-star user reviews that say awesome things like, “it created a cloud of foul-smelling smoke” or “it emits an ominously loud ticking noise if I plug anything into it for longer than five minutes.”

Given that rosy outlook, you could also choose to ship everything and then cross your fingers and hope your reading lamp will be just fine with a cheap wall adapter. And then it could explode in a ball of fire. Or the lightbulb could pop and flip the breakers in your entire house.

Those are just the results I’ve encountered so far. I’m sure if I keep plugging things in I can produce some more potential fiery or smoking outcomes.

(But I’m not! Again, take note, current and future rental property managers! I have learned my lesson.)

Alternately, you might buy a slew of those heavy power converts but also be the luckiest American in all of Wellington and rent a house that turns out to be dual-wired for both New Zealand and American power. 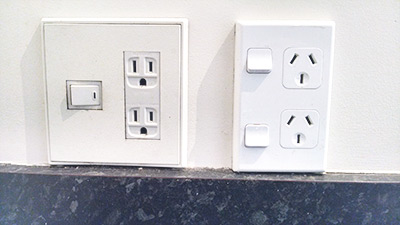 So different, yet so the same. Two sisters only have their parents to blame. It’s rare that two can get along, but when they do, they’re inseparable! Such a blessing comes to few, few.

I was quite suspicious when we first spotted the US-style plugs in the house. Sure, they looked like the familiar electrical outlets we knew and loved, but they wouldn’t be the first seemingly-familiar thing to fool me in New Zealand. I had learned my lesson with their “plush” toilet paper and so-called “ice cream.”

Plus, I wasn’t keen on experimenting on the mysterious outlets with a beloved standing mixer or a guitar amp, each of which easily cost three times as much to buy here as they did in the US.

We carried on with our lives as we awaited a visit from an electrician to divine the true nature of the outlets. That still involved a surprising amount of stuff that had to be plugged into a wall. High-end electronics tend to specify the voltage and frequency they require, which is how we learned that our printer is A-OK with being plugged into a wall in NZ.