Read on for my thoughts on each of these issues, or listen to our full discussion above. FanGirl and I have had an amazing time discussing Sandman’s first arc these past few weeks. We’re going to break from Sandman to refocus on Black Panther for the month of February, but we’ll happily return to Sandman if you demand it!

The Sandman (1989) #5 leans hard into its macabre elements, but also into its connections to the wider DC Universe. We see a dreaming Mister Miracle remembering his Kirby-drawn years on Apokolips and that a waking Martian Manhunter reveres Dream as a god of his lost race.

Sam Kieth’s art has gelled here with Malcolm Jones III on inks. It’s an altogether cohesive issue, and one where Sandman is not victorious in his quest – reminding us that he is not all powerful.

We also get a surprisingly humanizing car ride with Dr. Destiny as both he and Dream close in on the Ruby from which they both derive their power. Destiny is almost childlike in his conversation with the woman he holds hostage to drive him to the Ruby. Suddenly, it’s easy to find sympathy for this villain, locked away to rot into an emaciated skeleton in Arkham while his mother died alone.

Just as you begin to feel sorry for Dee, he shocks you back to reality with a burst of sudden violence. Your sympathy was for a devil. 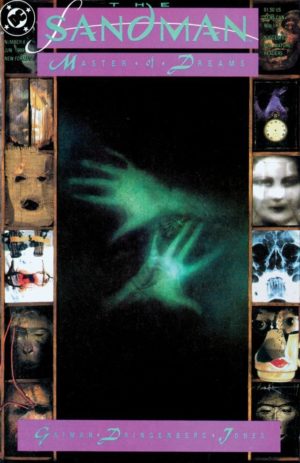 I don’t know why I resist issues like The Sandman (1989) #6 so much. It is a famous one, set entirely in the interior of a diner which acts as a stage for a sick play about amorality.

I think I struggle within the bounds of the strict structuralism of this issue. It playing with ticking clocks and subverts pages as hours and makes panels into minutes. It does its job of making us feel trapped there in the diner with the unsuspecting patrons, perhaps a little too well.

What did we learn here? That Dee is insane? We knew that. That he is sadistic? We knew that too. After the burst of violence that ended last issue, I don’t think any of his cruelty here is particularly surprising. What we learn is that Dee’s sadism is a function of his boredom. He doesn’t delight in other people’s pain so much as he wants to explore the absolute limit of punisher that their body and spirit can absorb. It distracts him, like a child pulling the wings off a fly.

As Dee plucks the proverbial wings off of these unfortunate souls in the microcosm of the diner, the macro of the wider world is sent reeling by the waves anguish and insanity echoing out from him and his Ruby. Even though we are trapped in the diner, television broadcasts tell us the effect the Ruby is having on the wider world. We believe it the scope of it as readers because we’ve seen what he can do when he is close and personal.

The most fascinating aspect of this issue for me is the introductory narrative in the omniscient perspective of the waitress, herself a writer. She is harmless next to Dr. Destiny, but her urges to rewrite the lives of all of her customers are no less nefarious than Dee’s. She wants to break up the lesbian couple and set them up with a pair of nice men, and make the man at the counter love her and forget his past hardships.

What the waitress imagines herself with the power to do, Dee does literally. She would, too, if she had the Ruby. Isn’t it also what Gaiman is doing, as a creator? There is evil within everyone’s idle thoughts. Villains are just the ones who have the means to enact it. 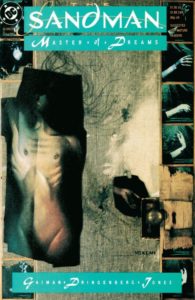 We go from being trapped inside a diner to dancing across the vast expanse of Dream’s realm as Dr. Destiny seeks to destroy Dream and gain control over the unconsciousness of the entire world.

This is really the first issue of iconic art where I thought, “This is the Sandman I was expecting.” Mike Dringenberg takes over for Sam Kieth on pencils here, and he makes Dream less alien and haunting.

There is less narrative content here, though possibly even more literary references, as is Gaiman’s wont when exploring the dream state. The final confrontation between Dr. Destiny and Dream includes one of the best page-turn reveals I’ve ever read (and an extremely bold use of plain white and full black, considering the printing standards of the time). 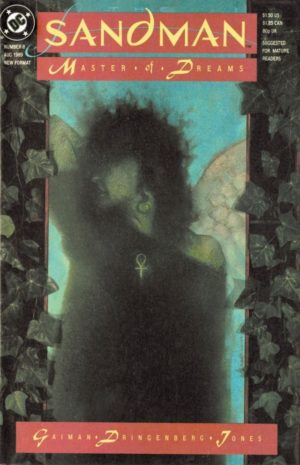 Despite catching a brief glimpse of Destiny of the Endless in issue #7, Sandman (1989) #8 gives us our first lengthy glimpse of one of Dream’s siblings: Death.

(Death appears a beautiful, petite goth girl with skin like milk. Her appearance was modeled on Cinamon Hadley, who recently passed away.)

Issue #8 begins with Dream feeling liberated by regaining his tools, and with them his power. He also feels aimless. What is the embodiment of a universal concept to do once his quest has ended and his rage has abated? Dream survived all those years in captivity and feels that he ought to have some purpose to drive him other than a return to crafting dreams.

Death asks Dream to tag along with her over the course of a day of performing her own routine duties. She manages people’s death rotely, but with a smile. The transition from life to death of an old, wheezing violinist is no different than that of a newborn, who suddenly finds a voice to ask Death, “Is that all there was?”

“Yes, I’m afraid so,” she replies – not just to the baby, but to Dream as he watches her do her duty. Existence simply is. You move forward in time because you cannot move back. Death takes people to the other side because she must. There is no epic quest. She finds her moments of joy and empathy inside of her routine.

After so long away from his kingdom and his purpose, Dream realizes it is time for him to return to doing the same.