This week in Back Issue Review I catch up with five indie series that have new issues out this week, plus one DC series that feels pretty indie. Between feminist explorers, giant monsters, recursive mean girls, backstabbing space pirates, and lucky retired boxers, I bet you’ll never guess what my favorites were! 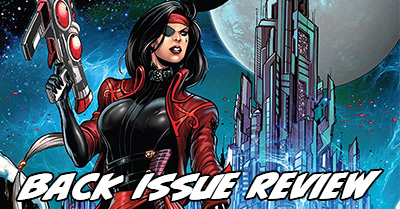 This post contains reviews of the following six runs:

Keep reading for capsule reviews of all six runs.

I’m on the fence on several aspects of this Barbarella reboot from veteran scribe Mike Carey. He has conceived of a post-desire religious empire that feels eerily familiar to the present day, and inserts Barbarella as an earthy force of both innocent intent and sheer sexuality.

Clearly Barbarella’s unflinching morality will be the undoing of both the planet-ruling theocracy and the simmering rebellion undoing in future issues, but I can’t help but think Carey missed the mark with having more of Barbarella’s perspective as the driving force in this story given the violation she endured in the first issue.

Artist Kenan Yarar draws great space battles, sci-fi, and hair, but he’s really struggling with the figurework and faces of this female cast. That should be the strength of the penciler on this series. A number of three-quarter profile shots just have the wrong anatomy, with Barbarella’s eyes sliding sideways and her nose collapsing into her skull.

I think I’d be more eager to see where Carey takes this plot (he’s not one to make such dehumanizing choices for his characters lightly), but I find Barbarella’s face to be wince-worthy nearly every time we see it. 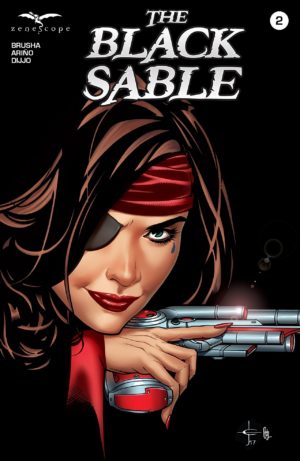 I am always here for lady space pirates cruising through the cosmos in actual ship-like spaceships.

Black Sable contains a fun and incredibly good-looking comic world that delivers exactly what its covers promise – swashbuckling pirate action that replaces the high seas with space. Black Sable is a dastardly but ethical space pirate captain nipping at the heels of a corporation too big to defend all of their cargo – even when that is a haul of valuable slaves.

Sable refuses to sell the slaves for profit on the black market, earning her the enmity of her crew and forcing her to turn to an utter scoundrel named Black to source her next score. Meanwhile, the corporation is after the both of them for different reasons … as is a race of blood-thirsty shark people and a fearsome third-party who looks like a half-Predator, half-Terminator.

I never stopped being surprised by the strength of the art series from Sergio Arino with colorist Diego Lima. The look of this comic feels grounded in classic books of the 80s from the likes of Dave Cockrum, with solid, muscular figures that aren’t overly-rendered or hyper-real.

It’s not only solid, but it’s stylish – making interesting framing choices like playing out the breach of a ship in silhouette. Lima’s color work is hyper-saturated in a dialed-up palette that makes everything feel like an awesome Saturday morning cartoon. Together with Arino’s pencils, they’re a strong enough team that I would definitely follow them to another book – and I would give anything to see them some X-Men titles! (Starjammers mini-series, anyone?)

If I have one critique of this comic it’s that Sable doesn’t really take charge. She has agency, and shows off her skills as a captain in a few key moments, but mostly it feels like she is getting swept along by the plot. Yet, when that plot is this dense with double-crosses and old connections, it’s hardly dissatisfying to see Sable as caught up in it as I am. 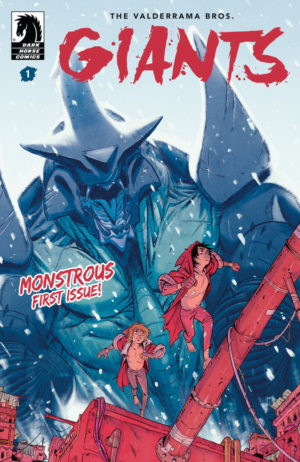 A spectacularly fun, good-looking, and energetic comic from The Valderrama Brothers.

So many stories try for this underdog Goonies sort of vibe and don’t get there. This one really does, without giving us overly much information about the world or the characters.

Two boys who are virtually brothers live in a vast underground city, where they act as runners for one of several rival gangs all gunning for tidbits of the same precious fuel. Their adventures take them topside, where they find more fuel than they ever imagined to exist, but where they learn firsthand the horrific reason the human race lives underground.

This is one of the best series I’ve seen in months – up there with Mech Cadet Yu (which would make you think I have some kind of specific love for giant monsters – I don’t!)

When there’s a chance they might be split up late in the first issue I was in denial, I had fallen in love with them so quickly. And when each of them takes their own rebellious path in the second, I already yearning for a happy ending.

Giants shows the power of Euro comics creators (and their aesthetics) coming to the American market. This thing as beautiful as a Miyazaki film and dense with emotional rewards and big monsters. 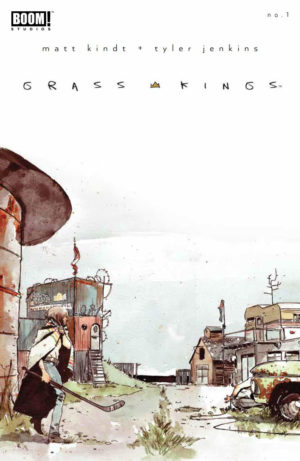 As with anything Matt Kindt touches, the concept for this comic book is amazing. It’s hard to imagine what goes on inside his labyrinthine brain to produce book after book full of low fantasy themes. Whatever it is, it’s magical.

The resulting story in Grass Kings is less magical than the imagined interior of Kindt’s brain. This book is for people who enjoy slow-moving procedural shows about cops in a small town that have a glimmer of ongoing mystery. Less Fargo, more Longmire.

Part of the problem is that Kindt’s fantasy is too low here. We spend most of our time in a town that’s effectively ruled by militia and cut off from the rest of the world, but nothing about it is explained – its legal status, how it gets supplies, why a trio of brothers is in charge, and why it’s so important they keep to themselves.

The entire story hinges on this undefined, near-meaningless conceit. We’re supposed to root for our characters and their town against an entire neighboring village whose main crime seems to be an inefficient and potentially abusive sheriff. But, is that worse than a town that’s holding itself hostage?

Similarly, there is a hint that the lake that mostly separates this small town from their lawful neighbors in Cargill has some sort of magical, murderous properties, but the hint is promptly dropped as we get into a macho shoot-out between two opposing sheriff forces.

I worry with watercolor art that the characters won’t be consistent or distinct. They all felt recognizable here under Tyler Jenkins’ brush, even if I didn’t absorb their names, except for in a series of confusing, desaturated flashbacks.

There’s a hint of more mysteries to come in this grass kingdom, but it’s too slow a burn for me to keep reading. 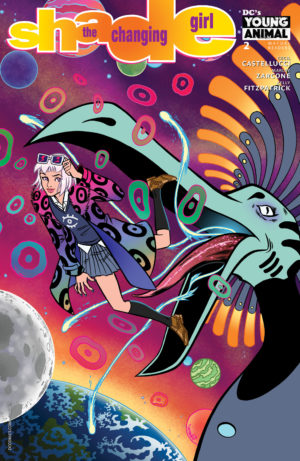 A trippy, Morrison-esque comic from Gerard Way’s “Young Animal” imprint with pop-art bright colors. We follow a weird and capricious Avian from the planet Meta as she uses the madness powers of the infamous Shade jacket to come to earth to inhabit the body of a comatose former party girl.

Did any of those words make sense to you?

This is a peculiar comic all about terrible people that frequently focuses on multiplying two negatives to create a positive. It has a lot of “stranger in a strange land” tropes in it as Loma the bird-girl explores life as Megan the girl-girl, but there’s also something transfixing about the pedestrian high school plot – shades of Heathers or Donnie Darko.

Loma is desperate for the human experience advertised to her in old black and white TV shows beamed across the cosmos. She as stuck on modern inventions like iPods as she is on the unforgiving natural of high school girls. This causes a staggering lack of self-reflection in the also awful Loma, which is compounded by intercutting to scenes on Meta where her shiftless boyfriend spends his time staring at her comatose body.

Eventually, things get psychedelic and sink into non-narrative incoherence. Even when it doesn’t make sense, it looks great – and, there are always precious moments of cheer, like Loma’s naive apology tour where she gives away tiny rocks as gifts. 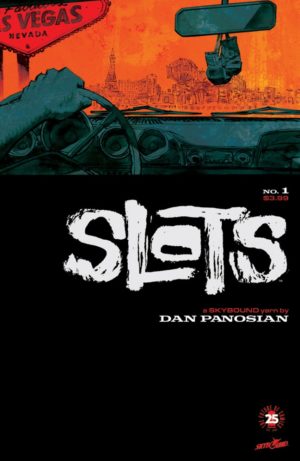 A charming trip into Nick Spencer “hapless down on his luck dude” territory courtesy of Nick Panosian, who does everything here but the lettering.

We meet Stanley, a hopeless grifter who was convinced he had pulled his last little con. He’s about to shut down his whole operation when he gets a text from and old friend in need and in the time it takes him to tow his trailer home to Vegas he’s hatched a whole plan to save the day.

This comic has a terrific, cinematic rhythm. Each scene has its establishing shot, its back an forth, and then cuts away. Of course all comics do this, to some extent, but there’s something about it here that makes it really feel like we’re watching a film unfurl in installments. The fact that Panosian is handling all of this himself is extraordinary given the quality of each individual element. The color work here really pops, thanks some lovely use of old-school duotone for shading.

As the story develops, it becomes clear that this comic is as much about boxing as it is about bad luck. I’m not so interested in boxing. Sometimes the matches serve a strong narrative quality, as in issue #2, but sometimes they’re just punching, as in issue #4.

One interesting aspect that hasn’t yet been clarified is if Stanley and his old-school Vegas crew have something more than luck on their side. There’s a hint that there might be some supernatural quality to these characters, as long as they aren’t being self-serving. Stanley’s ability to run a con sometimes seems to go beyond just a talent, especially when he’s doing it for altruistic reasons. There’s also a tarot card reading magician who seems to be great at gambling as long as he’s not being greedy.

While some of the relationships and developments here get a bit absurd, at its heart Slots is about trying to do the right thing when the wrong thing is cheaper and easier. Even if you manage to get it right on your own, you’re often one tiny trickle of good pushing upstream against a roaring tide of wrong.