You are here: Home / consume / comic books / New For Patrons: The Definitive Guide to DC’s The Outsiders 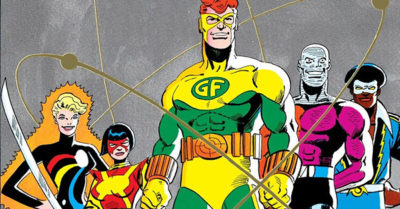 What I learned in putting together this team guide is that the Outsiders really are outsiders. Batman formed the team specifically to work outside the rules and regulations of the Justice League.

Later Nightwing reforms it as an opportunity to run a well-trained force of heroes with none of the emotional connections of Titans. The core team members – Geo-Force, Katana, Metamorpho, and Halo – appear infrequently outside of their own title.

The newly-compressed DC history of the post-Flashpoint world meant there was no time for Batman to form this team as we know it, which means it doesn’t exist in current DC continuity – and neither does Geo-Force! That’s a tricky thing, since both Katana and Halo debuted alongside Geo-Force in the original 1983 origin of the team.

With Katana now a well-established start of Suicide Squad, it seems impossible that this version of The Outsiders could return … but, who knows what might transpire with DC’s continuity by the end of Doomsday Clock!

Want access to this guide today? It’s available in exchange for covering $1.99 a month of CK’s hosting expenses.