New to Squirrel Girl? Here’s where to start!

Check out Vol. 1: Squirrel Power and Vol. 2: Squirrel You Know It’s True, a pair of paperbacks that collect Squirrel Girl’s entire 2010 series PLUS her debut from 1990. You don’t need any special Marvel knowledge to start there. You can get both of those volumes in a single hardcover with Deluxe Edition, Vol. 1.

If you like what you read (or already love Doreen Green), keep reading to learn more.

Could writer Will Murray and venerable artist Steve Ditko have ever dreamed that when created a silly, one-off ally for Iron Man in a nearly-shelved story in 1991 they were creating a hero that wo 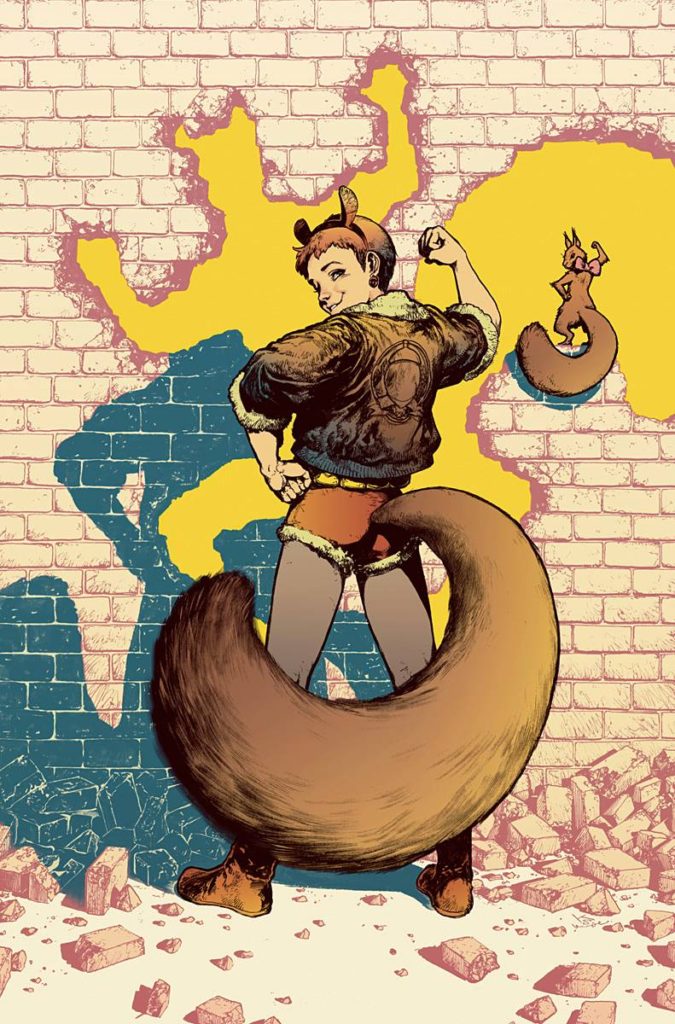 uld capture the hearts of so many fans over 25 years later?

Probably not, given that Squirrel Girl did not make another appearance for 14 years after her ignominious debut! Plus, she was a girl with the claw, tail, proportional strength, and reflexes of a squirrel – not exactly A-list material, even when you add her ability to understand the critters. In other words: a one-off joke.

She finally resurfaced in 2005 as part of the pun-filled Great Lakes Avengers (GLA), which were part of future Spider-Man writer Dan Slott’s journey from YA funny books to Marvel’s signature wallcrawler.

Slott continued to dote on Squirrel Girl for a few years, but what cracked this nut wide open cause was Deadpool.

Fabian Nicieza was writing Cable & Deadpool in 2006, and in the fateful issue #30 Deadpool first crossed paths with Squirrel Girl and the GLA during Marvel’s Civil War event.

Okay, it wasn’t actually that momentous occasion. However, Deadpool is a major seller for Marvel and his fans love many silly, punny things. Squirrel Girl fit right in, which brought her much wider notice than she had under Slott’s pen. The two writers then teamed up for Deadpool / GLI: Summer Fun Spectacular, while Slott twice slipped her into his Avengers: The Initiative.

Finally, in 2010, Squirrel Girl hit the big time – Brian Bendis added her as a supporting character to one of a pair of Avengers flagship titles – New Avengers. No longer at the comedic fringe of the Marvel Universe, now she appeared in the supporting cast of Marvel’s top-selling books.

And then, she finally… disappeared completely. Seriously, after Bendis’s use of her, she up and dropped out of comics for three years. It seemed like she was about to fade back into obscurity, but after the success of 2014’s Ms. Marvel, Marvel was seeking more quirky, female-lead books to bring to market.

Suddenly, Squirrel Girl was in her own top-selling comic book! It just took 25 years to get there. And, in all honesty, you don’t have to read any of those 25 years of comics to enjoy this series. North and Henderson give you all of the information you need to know to enjoy their book in nearly every issue. The launch of the book itself was a fresh start for Squirrel Girl – it only glancingly references her past stories.

Thanks to her newfound popularity, Squirrel Girl’s profile in Marvel was a bit higher in 2016. Now, rather than be a supporting member in an Avengers book, she was a star in a new volume of New Avengers. Plus, she made more guest-starring appearances than ever.

Squirrel Girl made 14 appearances prior to being summoned to the Avengers mansion for nanny duty in 2010. Of those, 11 of them are collected into a single volume – so you should probably just buy that instead of hunting around for their various other means of collection. 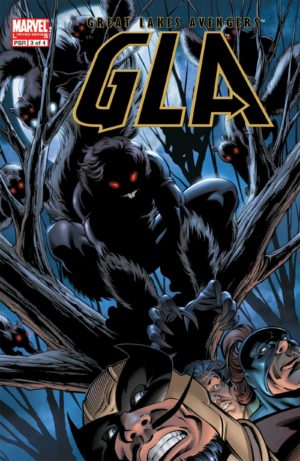 I’ll continue to reference this collection as USG+GLA below. That’s catchy, right?

If you prefer the hunt – or, you want to understand how these issues fit together chronologically, here’s the full details.

Marvel Super-Heroes Vol. 3 (1990) #8 (3rd story)
Squirrel Girl’s 1991 debut! This was a quarterly comic book that mostly contained “inventory stories” that were written for other books, like single-issue fill-ins or back-up stories for Annuals.

In this case, she appears in an Iron Man story. This is conveniently collected in USG+GLA, above, as well as Vol. 1: Squirrel Power, below!

Chronologically, Squirrel Girl next appears in brief flashback in GLX-Mas (2006).

Great Lakes Avengers (2005) #1-4: G.L.A. Vol. 1: Misassembled
Squirrel Girl returns after 15 years of absence to becomes a member of these parody Avengers who assemble while the New Avengers are busy falling apart.

This original collection includes the GLA’s debut from West Coast Avengers #46 (which did not include Squirrel Girl) and Squirrel Girl’s debut from Marvel Super-Heroes #8. The mini-series (sans the team’s debut) is included in USG+GLA, above

GLX-Mas Special (2005-06)
Squirrel Girl appears in each story in this one-shot special issue! This was collected for the first time in Vol. 2: Squirrel You Know It’s True, listed below, but it was later included in USG+GLA, above!

Squirrel Girl is described in X-Men: The 198 Files (2006) as one of the few remaining mutants after the end of House of M. Think of this as a sort of handbook issue – it doesn’t include a new story, just art and information. Whether she’s a mutant or not is still up for debate. Visit Marvel Universe Events to learn more about House of M and The 198.

I ♥ Marvel: Masked Intentions (2006)
This contains a pair of love-themed stories, which have never been reprinted prior to The Unbeatable Squirrel Girl & the Great Lakes Avengers, above

Thing Vol. 2 (2006) #8: The Thing: Idol of Millions
Many different heroes appear in this single issue – it’s like Dan Slott (the author who brought Squirrel Girl back in GLA) was trying to fit the entire Marvel Universe in a single issue! Luckily, you don’t need to buy The Thing’s collection for this one issue if you don’t want to – her scenes are in USG+GLA, above. 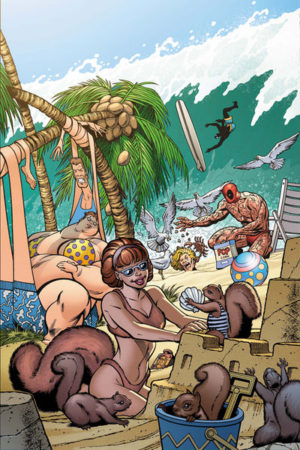 Cable & Deadpool (2004) #30: See Deadpool
This issue has been recollected several times in the past before being wrapped up with other Squirrel Girl material in USG+GLA, above. Deadpool’s series are always comedic in tone, but the humor is slightly more adult than in a 2015 Squirrel Girl book.

She is mentioned or pictured in Civil War Files (2006) #1 and Civil War: Battle Damage Report (2007) #1, but neither are in-story appearances. Visit Marvel Universe Events to learn more about Civil War.

Deadpool / GLI: Summer Fun Spectacular: See Deadpool
Squirrel Girl appears in most of the stories in this special, which previously had been collected with Cable & Deadpool material, though it’s now in (you guessed it) The Unbeatable Squirrel Girl & the Great Lakes Avengers, above.

Squirrel Girl doesn’t actually appear on-panel in Howard The Duck Vol. 3 (2007) #1; she’s just mentioned or otherwise implicated in the events in the issue.

Avengers: The Initiative #19 & 25: See Young Avengers
The Initiative was a training ground for new Avengers when the government was trying to field a super-team in each state. That means Squirrel Girl didn’t get a ton of focus here (although she was, again, written by her early champion Dan Slott).

She is mentioned in a pair of handbook issues – Women of Marvel: Celebrating Seven Decades Handbook (2010) and Deadpool Corps: Rank and Foul (2010) #1. Once again, these are books containing art and information only, not story content.

Age Of Heroes (2010) #3 (4th story): Age Of Heroes
This was a series of short stories highlighting heroes at the beginning of Marvel’s glossy, easy-to-love 2010 era called The Heroic Age. This story is included in USG+GLA, above, and Vol. 2: Squirrel You Know It’s True, below.

I Am An Avenger (2010) #1 (3rd story): Avengers: We Are Avengers
This collection includes all five issues of this series of oral histories and short stories of how different characters joined the Avengers, but Squirrel Girl’s appearance is also included in USG+GLA, above.

In this period, Brian Bendis takes notice of Squirrel Girl and adds her to the supporting cast of his street-level team, New Avengers. She’s not actually an Avenger, but a nanny to Luke Cage and Jessica Jones. Generally, if she appears in an issue it means she gets at least a few panels of speaking time.

However, I wouldn’t recommend a big Squirrel Girl fan chase down these appearances – they’re minor, and Bendis gets some details about her wrong (including implying that she dated Wolverine – he’s, like, six times her age!). To see more details about this run of Avengers, visit Avengers & New Avengers Guide. 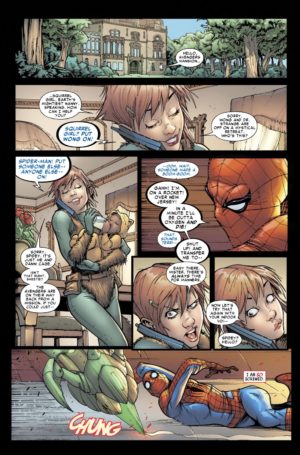 Wolverine (2010) – I am recapping this purely for informational purposes – these are not canon appearances and you should not track them down. In #8, Squirrel Girl appears in a (frankly, gross) single panel of Wolverine’s psyche. She is also mentioned in #5, but I have confirmed that she does not appear on panel.

The Amazing Spider-Man (1963) #653 – See See Spider-Man. This is a single, comedic page of Squirrel Girl answering Spider-Man’s desperate call for help to the Avengers Mansion.

Avengers (2010) #18 –  Squirrel Girl is seen in the background of three panels. You can barely make out her face, and she never speaks.

Spider-Island: The Avengers (2011) #1 – Occurs prior to New Avengers #19. Squirrel Girl is seen on two pages performing her nanny duties while a baby Danielle Cage is infused with spider-powers.

Also in this period, she may appear in Wolverine/Deadpool: The Decoy (2011) One-Shot. I’m not sure, because it also recollects a previous story she appeared in. She also appears in cameo in Marvel 75th Anniversary Celebration (2014) #1. 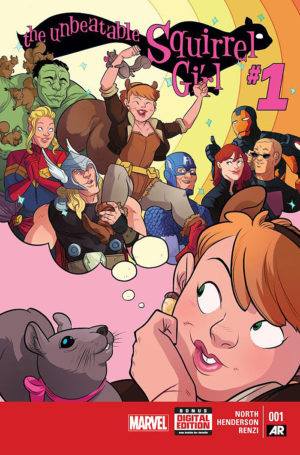 After the success of another younger-reader oriented title without much super-hero baggage (Ms. Marvel), Marvel launched Squirrel Girl out of obscurity and into her own comic book! It is written by Ryan North from Dinosaur Comics and Adventure Time and drawn by Erica Henderson. In it, Squirrel Girl tries to quit the superhero life and attend college – and she’s successful in half of that.

Deluxe Edition, Vol. 1
This collects all eight issues of Squirrel Girl’s first ongoing series in an oversized hardcover edition – the exact contents of her first two trade paperbacks directly below.

Vol. 1: Squirrel Power
Collects The Unbeatable Squirrel Girl (2015 A) #1-5, plus and her debut from Marvel Super-Heroes #8

Okay, so, this is a little confusing. 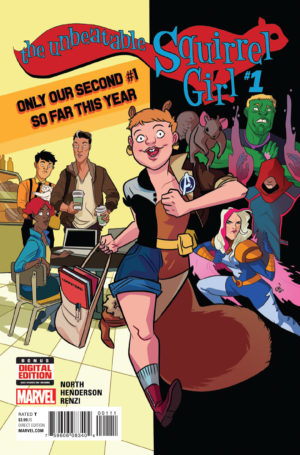 The Marvel Universe ended in 2015 due to an event called Secret Wars. Every book was cancelled, and everything Marvel released was part of that Secret Wars world for about five months.

Then, a whole new line of books launched. That included Squirrel Girl, with the same cast of characters and creators.

Really, this #1 could have just been called #9, as it picks up almost exactly where the prior series leaves off in terms of story, though now Doreen is in her second year of college. Luckily, the collected editions maintain their numbering from the prior volume.

Deluxe Edition, Vol. 4
Collects the contents of trade paperbacks Vol. 7-8, below – issues #22-31, plus A Year Of Marvels: The Unbeatable 1 (Tippy-Toe Story) and Not Brand Echh #14 (Squirrel Girl Story)

Vol. 3: Squirrel, You Really Got Me Now
Collects The Unbeatable Squirrel Girl (2015 B) #1-6 and a crossover with Howard the Duck #6

Civil War II issues are presently being released as of this update – so far, she appears in Civil War II (2016) #1

Vol. 7: I’ve Been Waiting for a Squirrel Like You
Collects #23-26 and a Tippy Toe story from A Year of Marvels.

These are books – with words but no pictures! Amazing! That means they will not exist in the main story continuity of the Marvel Universe, but that won’t stop you from enjoying them.

Didn’t find what you were looking for?
Check Amazon for Marvel’s newest Squirrel Girl titles.