On Saturday I realized I had been actively avoiding Justice League International.

As a fair representation as a lifelong DC skimmer, I look at this cover and see Batman, a lame alternate version of Green Lantern, and a bunch of unidentifiable nobodies. Not exactly the most-inspiring reason to read a comic book.

That’s always been one of my major problems with DC – past the heavy-hitters from Justice League of America and a handful of other heroes we all played with in the 80s as super-friends toys, I’ve never heard of these people. Unlike Marvel, they don’t sprout from one of just a handful of classic lines of 60s and 70s titles. I suppose you could say the same thing for the extended supporting cast of the Avengers or the X-Men, but they’re part of a larger interconnected family of stories. Even when they’re off panel their lives are being affected by what’s happening.

Can you say the same for Godiva or Vixen?

I seriously don’t know! Maybe I’m just projecting my DC distaste – but this weekend I finally sat down to find out by reading this issue. 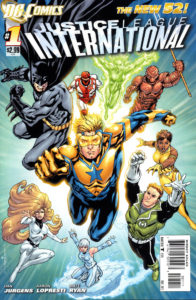 In a line: “A different Justice League?”

Justice League International has a slight by-the-numbers feel thanks to its hastily assembled multicultural team of heroes (plus hanger-on Batman) responding to orders from a bald guy to face an unspecified geological terror. It’s Comics 101 – and, effectively the first half of Giant-Size X-Men #1.

Jurgens works to quickly establish the personalities and conflicts of all the members within the somewhat rote, old-school story. No Morrison-style existential dilemmas here. We’re given at least a hint of the attitudes of each and their powers were all obvious enough to be telegraphed by the art in a few panels of battle (except for Booster’s, which are unclear).

The bottom line is that this cookie-cutter approach aims the book more towards the DC insider than the newbie. A long-time DC fan will likely be excited to read the B-list characters they’ve grown to love (as I would be on an X-Men b-team). It’s a good intro for a new reader, but I’m not sure it’s worth revisiting in another month.