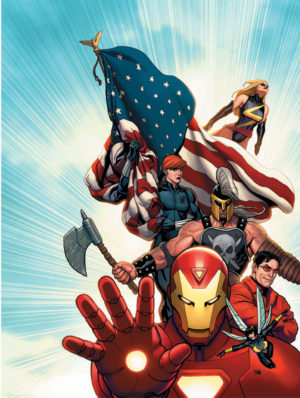 The original Mighty Avengers series emerges directly from the end of the Civil War event, which caused a schism in the Avengers. It featured an official, government-sanction team of Avengers sponsored by Iron Man and lead by Ms. Marvel. It’s also written in an intentionally nostalgic style to contrast with New Avengers, with narration and thought bubbles.

The title was dropped from the Marvel lineup for the Heroic Age in 2010 in favor of the pair of flagships, Avengers and New Avengers. However, it returned in 2014 during the Infinity event as a new, street-level team of brawlers. It was also a markedly diverse team focused on a number of black heroes.

The senior core of the team – Spectrum and Blue Marvel – carried over to Ultimates in All-New Marvel Now, as did its commitment to increased representation for Marvel’s heroes of color with the additions of Black Panther and Ms. America Chavez to the cast (as well as Captain Marvel).
END_OF_DOCUMENT_TOKEN_TO_BE_REPLACED