You can get the best out of life when you are willing to engage in forgiveness and grant an occasional second chance.

That’s a reminder I could use a little more often. Whether we’re talking about a vegetable I’ve never eaten before or a song by a new artist, I tend to treat any first encounter as an absolute litmus test without room for reassessment. 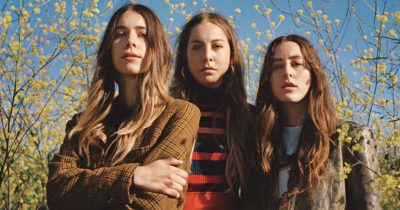 It’s a great habit when it comes to quickly whipping through a huge swath of new material (a situation more common for songs than vegetables), but not always great for tracking the evolution of an artist.

Which bring us to Haim, a band of singer-songwriter sisters.

I wasn’t a tremendous fan of Haim’s first album, 2013’s Days Are Gone. It had two of the elements of music I love most – namely, tasty guitar riffs and multi-part female harmony – but I just couldn’t connect with it. That wasn’t helped by catching a few videos of truly miserable live performances from the band where they could not reassemble the harmony from the record.

I chalked them up to a flash in the pan and considered them cancelled. On to the next thing!

That’s why it took me a little while to actually listen to any songs from their 2017 sophomore record, Something To Tell You. I thought I already knew enough of Haim’s story to tell you how my listen would end – decidedly uncharmed, mostly underwhelmed.

I was so incredibly wrong.

Something To Tell You is the work of a much surer band than Days Are Gone. While it has a slimmed down sonic palette compared to their debut, what’s left is a greatly refined blast of sunny melodies that evoke Fleetwood Mac and Wilson Phillips, with a touch of Shania Twain’s drama and a pinch of Sara Bareilles’s theatre nerd.

Nowhere is this more apparent to me than on “Want You Back,” which is a perfect blend of those four major touchtones (and, I suspect, major influences) with some of the tightest harmony I’ve heard from the band yet.

Of course, it’s one thing to record a song this tight in the studio. Can they reproduce it live?

Oh, how they can. I’m not even sure which version I love the most! This Live Lounge studio recording (with tons of mugging from the ladies); a slower, subtler version Live on Triple J; or this powerful staged version from Graham Norton – all three with stunning harmony.

I’m so happy I gave Haim another chance so I could fall in love with this song, which might have been my most-played new track of 2017. Or, in the words of the band:

And I had a fear of forgiveness
(Said it from the beginning) I was too proud to say I was wrong
(Said you’d always see me through) but all that time is gone
No more fearing control, I’m ready for the both of us now