There is no question in my mind that diversity of representation in fiction is important, and not just because EV naturally gravitated towards female heroes as a baby.

The media we consume helps to construct the reality we assume, which is highlighted by one of my favorite communication theories, Cultivation Theory. It’s a pretty obvious theory at its root – if all we see on the news are stories about muggings and murders, we assume the world around us is disproportionally unsafe. We cultivate our perceived reality from the media we consume.

Similarly, I think if we consume fictional worlds where we see ourselves reflected we are emboldened, and when they are filled with people different than ourselves, we come to hope and expect our lives will be filled with those people, too. 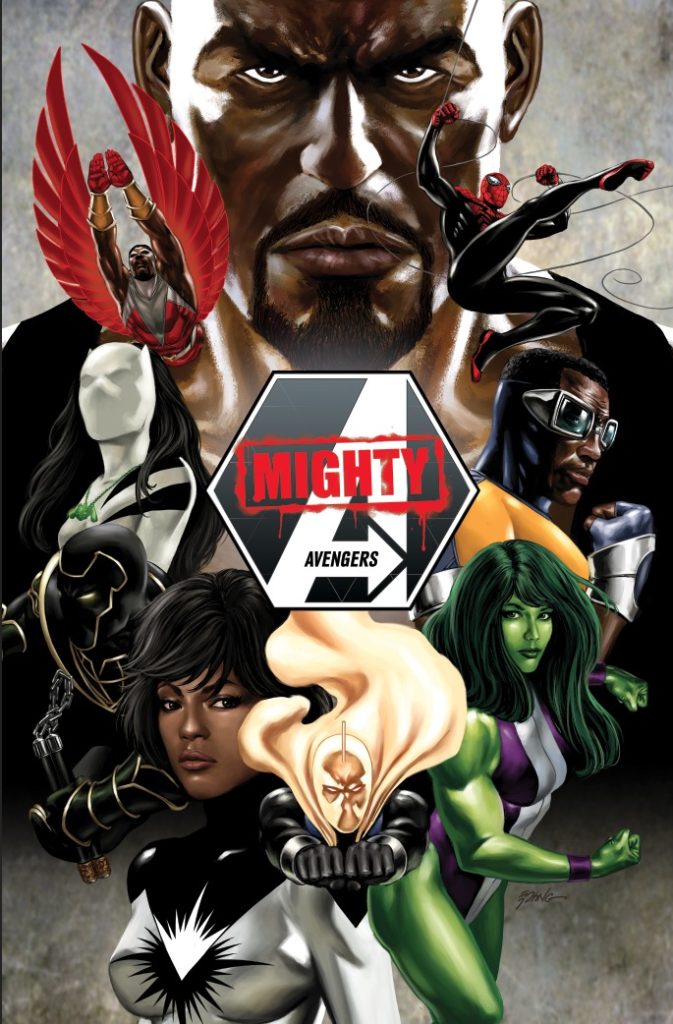 Marvel relaunched Mighty Avengers in 2014 as a majority POC team of Avengers. Art by Steve Epting.

That means all representation is good representation, like Riri Williams as Iron Man, but having a diverse cast is just step one of a truly representative fictional world. Step two is how you treat those characters and who among them gets to be the protagonist.

One of the challenging aspects of being the author to construct those worlds is putting your cast of diverse characters into perilous situations. For a story to be thrilling – especially a story serialized in the long term – we have to believe that characters are truly in danger.

This is part of what makes an auteur like Joss Whedon so compelling (and so maddening): with him, everyone is in danger, all of the time. There is no status quo. Of course, comic books embrace this concept wholeheartedly –  nothing thrills them like making the transgressive choice of killing the seemingly unkillable (only to bring them back to life later). It’s no coincidence Whedon was a comic fan before he was famous (he’s said many times Buffy was based on the template of Kitty Pryde).

(I don’t mean to deify Whedon, as he has his weaknesses from the critical lenses of feminism or queer theory (the two I feel somewhat qualified to speak to), but he is easily the best mainstream male creator to use as an example here – and not just for his visibility. The fact of the matter is, he’s willing to kill popular white guys and let women win. That’s a start.)

Is killing more characters more often the best method of making a story with a diverse cast more thrilling? Not really, because that doesn’t fully recognize the problem of protagonists and plot armor, among other reasons.

The protagonist of a serialized story tends to wear some unavoidable amount of plot armor – a form of extra-fictional protection derived from the fact that we know they will be in the commercial for the next installment. They might be injured or tortured, or even killed in the long run, but they don’t tend to die in random, unhyped episode.

(Many forms of episodic fiction use this to their advantage, setting up a fake set of protagonists to off shockingly early. I can only think of one that legitimately killed main characters left and right at all times: Spooks AKA MI:5 from BBC. Be warned – you are going to be upset when you watch it.)

To make the world around the protagonist seem like it has some amount of stakes, it is the supporting cast who must go without plot armor to be placed in peril. Thus, if the only diversity in your fictional world is in the supporting cast, then your diversity tends to be expendable. If they aren’t, it feels like they are also are wearing “plot armor,” and now your fiction has no consequences.

The unfortunate result of this is that the people who need to see themselves represented more in heroic fiction – people who are black, indigenous, Asian, LGBT, female, disabled, and on – also wind up seeing themselves maimed and killed to make their protagonists feel something and to give their world the illusion of danger.

(The disposal of supporting female characters to make male protagonists feel was deemed “fridging” or “Women in Refrigerators” by then-critic/now-author Gail Simone. At this point, “fridging” is a more generalized term applied to the suffering of any (typically minority) character in order to create a reaction in the (typical male) protagonist.)

There’s a deeper vein being tapped here than simply the expectation that these characters will be endangered. There is also the risk that readers begin to see those grim fates as inextricably tied with their identities. A great example that isn’t tied exclusively to identity is the horror movie trope that the girl who has sex is sure to die. The implication (sometimes intentional, sometimes not) is that sex is sinful and it makes you narratively expendable (or, worse, a target for violence). 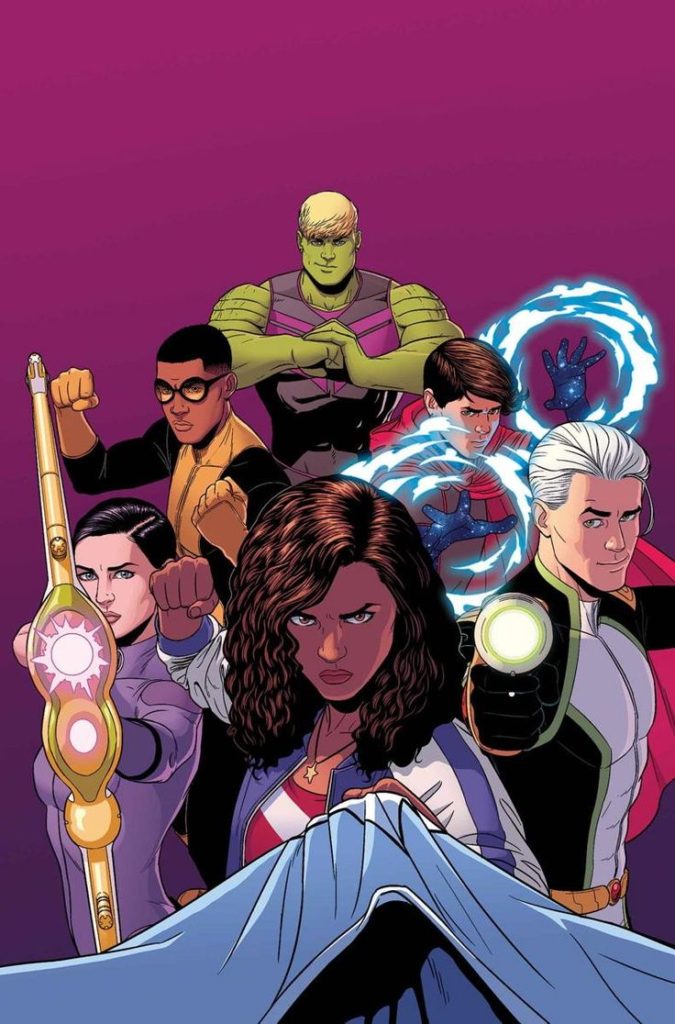 In 2013, Kieron Gillen and Jamie McKelvie launched a Young Avengers team that turned out to be all-minority and ALL QUEER. Wow. Art by McKelvie.

What is the implication when the gay friend or the black friend always dies? When a reader who identifies that way sees themselves being killed again and again in the media they consume, what reality do they begin to cultivate?

Do they believe their life matters?

Author Kieron Gillen recently addressed this in a response to a reader question on Tumblr; here’s an excerpt:

Reader: I (queer myself) understand an issue with such a lack of proper representation/appreciation for queer characters, especially with the recent discussions of queer deaths in media. Yet with WicDiv I see all characters as equally cared for, even in death. Just curious on your thoughts?

KG: There’s certainly been people who’ve found it upsetting and stopped reading the book for it, which we understand entirely. At least part of the reason our story front loads the “All these people are going to die” is that we want to put our cards on the table. … [I]n culture, we are so used to seeing bad things happen to LGBT characters because they are LGBT, that we can read negative intent into stories where bad things happen to them despite that they they are LGBT. I suspect she’s right.

(Like Whedon, Gillen’s approach works within the context of his stories – they’re typically stories about fear and loss where anyone might suffer a terrible fate, and he telegraphs that at the start. Also, not every one of his stories is one of loss – his brilliant Young Avengers is a mainstream book with the most diverse group of characters I’ve read in years and it doesn’t end in misery.)

Just as the solution to making a story thrilling isn’t constantly killing characters, the solution to the issue of increasing positive diverse representation cannot be plot armor for every minority character that walks into the story. That’s both patronizing and predictable. There is no good fiction without risk. To again reference the familiar horror trope, just as it’s no fun (and: awful) to know that the virgin will always live to see the end of the film, you don’t want to think a character is invincible just because she is latina or disabled or bisexual.

In Gillen’s Young Avengers, for a major character to meet a grim fate they would have to be a minority character because the entire team was a minority in one way or another – a woman, a gay male couple, a pansexual male, a bisexual black male, and a gay latina daughter of a same sex couple. In fact, given the final panel, it might have be an all-queer superhero team – a sentence which makes me smile every damn time I write it.

That’s why representation matters. That’s why diversifying the casts of the fiction we consume is not “politically correct” or “diversification for diversity’s sake.” Representation matters because stories matter. We’re each our own protagonist, but many of us don’t see that reflected in the media we consume. When we have a world of comics books, movies, and television shows populated similarly to our actual worlds, then every person will own a key component of cultivating a reality where they matter and they are safe.

And, people exposed to those character who identify differently than themselves will begin to have it reinforced that “The Other” is not an expendable character in their story.

(This was originally going to be the introduction to a review, but it (a) turned into its own piece and (b) would seem to unnecessarily spoiler the outcome of the comic.)