When was the last time a song made you cry?

I cry at a lot of music and not just at the sad parts. I cry at awesome crescendos. One time I cried over Weezer’s Hash Pipe.

I cannot tell you the last time I cried over a song one of the first few times I heard it before hearing St. Vincent’s “Dear Johnny” from her new LP Masseduction this past week.

I’m not sure what’s so crushing about it. It’s not overtly sad. It’s not, for example, Janet Jackson’s “Again” or something. Yet, there I sat in my bed, openly weeping as it played on a loop, until finally I broke the spell by getting up to figure it out on piano.

I wanted to play it on piano so I could dissect the sadness of the song. I wanted to understand its power over me. I even sent it to Gina, my sister in musical DNA, hoping she might be able to explain it to me.

This is not Annie Clarke’s first reference to Johnny, who has been a recurring character in her music. I wasn’t responding to some overarching story of his, although the tale in this song is rather sad. Not sad enough to make me cry on command, though. 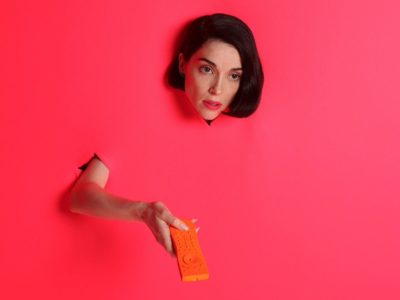 The secrets of the song unfurled themselves for me as I inched my way through it by ear on piano. The piano figure in the verse opens up an increasing delta between the vocal melody and the supporting arrangement. The melody stays in the same range of a few notes, twinkling over and over like a star or an SOS while the piano figure gradually descends, breaking out of the key signature in its first step, introducing a new bass note on every chord.

Remember one summer we walked in Times Square
I showed you the zombies with hundred-inch stares
You took a Bic, set your hotel on fire
We took the blame, took the bags to the train

It’s a common melodic device, but here it is more than that. The widening gulf between the melody and the bass notes mirrors the drifting apart of St. Vincent and her erstwhile Johnny. She used to bring him gifts and now he’s cursing at her image on television screens. Does she still feel the same love for him? She claims she does. She’s still wishing him happy birthday, after all.

Yet in each chorus there is a slight sourness beneath her wistful “wherever you are,” a little aural wince in the form of a passing diminished chord – again, breaking the key signature of the song. The passing chord isn’t necessary. All it does is add specificity to the stepwise ascent and an extra oomph of resolve to the next chord.

You could describe the chorus – and in fact, the entire song – in the same way. Annie isn’t wishing her dear Johnny a happy birthday just because. It’s not for his benefit. It’s a forced, extra little step she’s inserting to try to find her own resolve with her memory of a friend who is no longer the same person he was to her before.

(Maybe it is she who has changed?)

These little touches give this quiet, unassuming song a heft far beyond its words and music. When it lilts into the final refrain, the slightly tweaked lyrics hit like a sucker punch:

Annie, how could you do this to me?
Of course, I blame me
When you get free, Johnny
I hope you find peace

She’s laying Johnny’s ghost to rest in her life, but she cannot grant him that same serenity in his own. He’s lost to her, his face rapidly receding into the memory of one of the biggest stars in rock today.She’ll still sing this hymn, though. And maybe sometimes, when she is playing in New York City, she will scan across the crowd and imagine for a moment she sees his face.