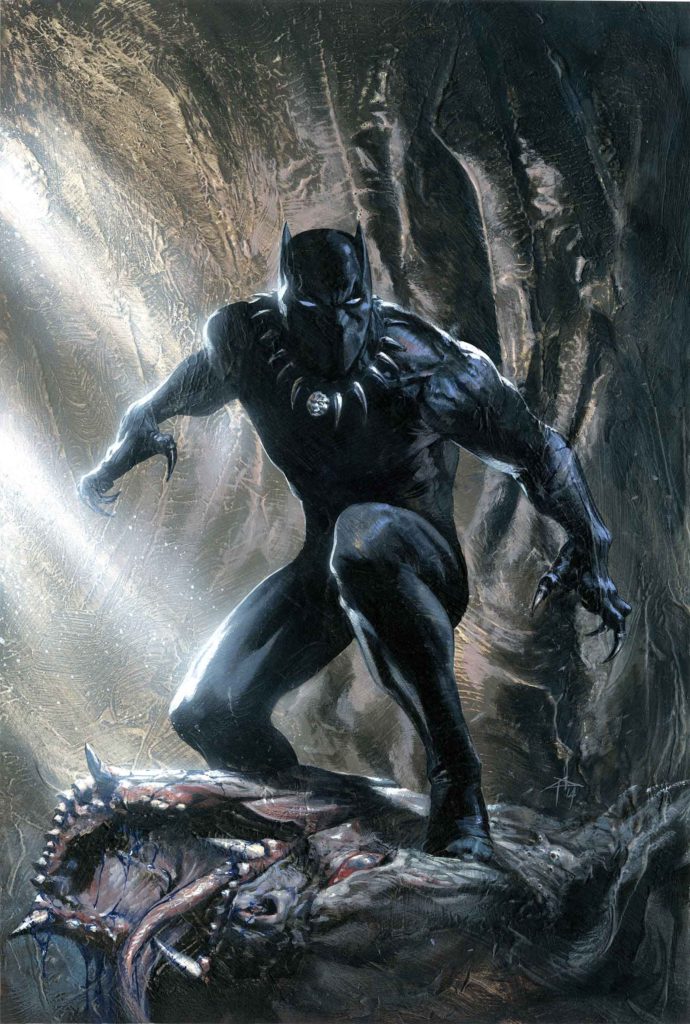 There are a pair standard formats of books that cover Black Panther’s early history, and I’ll cover those first – Masterworks and Epics.

Then, move on to learning how to collect Black Panther, era by era.

Masterworks Vol. 2
Collects the complete Black Panther series with issues #1-15, as well as a wrap-up story in Marvel Premiere #51-53 and material from Marvel Team-Up #100

Marvel’s Epic Collections represent a consistent, affordable, full-color bookshelf format of issues in perfect continuity order without a single gap. The catch? Marvel is releasing them in a random order.

Epic editions are also listed below in their chronological placement, as they are frequently the only coverage of a specific run.

Panther’s Quest
This is effectively Epic Vol. 3. With no team affiliation or book to call his own, Black Panther became one of the rotating anchor characters of Marvel’s long-running anthology in Marvel Comics Presents (1988) #13-37: as penned by longtime author Don McGregor and illustrated by the legendary Gene Colan.

Rise Of The Black Panther (2018) #1-6
This mini-series is the Coates version of T’Challa’s origin, beginning before he was born and continuing past his debut.

Storm, Vol. 2: Ororo – Before The Storm #1-6
Available as a digest (i.e., small-sized) TPB. Depicts a story of Storm and T’Challa’s romance from before either of them were heroes. 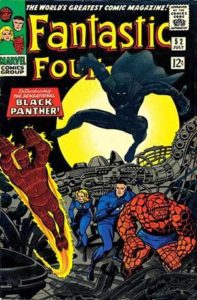 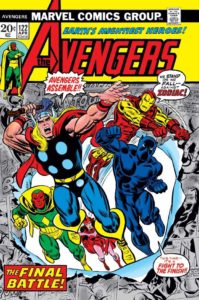 After a handful of guest appearances, Black Panther returns full-time to the Avengers in #105.

Avengers #105-112: See The Avengers
During this period, Black Panther’s participation is implied in Marvel Team-Up #7 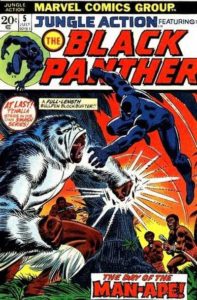 lack Panther departs the Avengers and became the solo star of Jungle Action, taking over from Tharn – a sort of low(er)-rent Ka-Zar.

In January 1977 Black Panther graduated from Jungle Action to his own solo title! Issue’s #14-15 are co-written by Ed J. Hannigan, who co-scripted #13 with Jim Shooter, and who wrote a conclusion in Marvel Premiere #51-53. 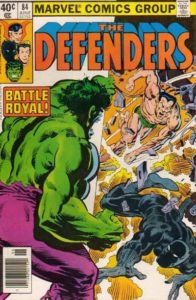 Black Panther was relegated to only very occasional guest-starring action in the 1980s, appearing in just 20 issues over the course of the nine years after his series concluded. 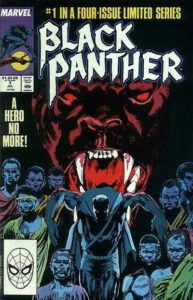 After the mini-series: West Coast Avengers Annual 3 and as a pin-up in Marvel Fanfare #41.

Marvel Comics Presents #13-37: Panther’s Quest
With no team affiliation or book to call his own, Black Panther became one of the rotating anchor characters of Marvel’s long-running anthology as penned by longtime author Don McGregor and illustrated by the legendary Gene Colan.

Then: Avengers West Coast #59 (needs verification), Silver Surfer: The Enslavers (brief appearance?), and in Marvel Fanfare #53 (could be a reference only). 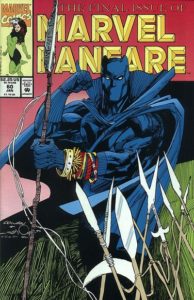 Marvel Super-Heroes, Vol. 3 #1: Not collected. This is an inventory story in an anthology-style title.

Knights of Pendragon #14-18: Not collected. A Marvel UK title.

Marvel Fanfare #60: Not collected. Black Panther is one of the featured stories in this final issue.

Damage Control, Vol. 3, #4: Not collected. This is not a key appearance.

Battle Axe #5-7: Not collected. A Marvel UK comic. In-continuity, but not a key story.

Avengers #356: See The Avengers. Black Panther is a featured character.

Deathlok, Vol. 2 #22-25: Not collected. Black Panther appears in an arc that takes places in Africa.

The Avengers: Collector’s Edition: Not collected. This was a promotional comic from Sugar Babies/Charleston Chew/Sugar Daddy

At this point, Black Panther becomes a supporting player in Fantastic Four and Fantastic Force for the remainder of their runs.

Then: Thunderstrike #20 (Black Panther is the featured guest-star)

Then: Avengers #394, Age of Innocence: The Rebirth of Iron Man, Over the Edge #6 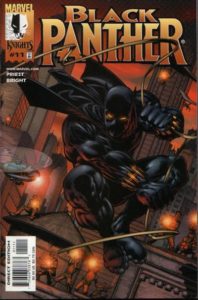 After #5: Daredevil, Vol. 2 #8, Contest of Champions II (Black Panther appears throughout this mini-series)

#18-35: Black Panther by Christopher Priest: The Complete Collection Volume 2
Collects a crossover to Deadpool #44 after #22.

#36-62: Not collected, though a Priest Vol. 3 collection has been announced.

as recollected in Complete Collections...

#35-41: By Reginald Hudlin: The Complete Collection Vol. 3
Note that this does include the final arc by Jason Aaron. Also collects Black Panther (2009) #1-6, Black Panther/Captain America: Flags Of Our Fathers #1-4, and Black Panther Saga. 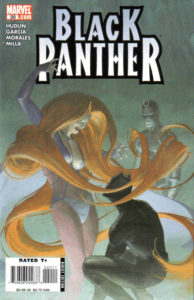 #7: See Marvel Universe Events: House of M. This story falls after #8-9 in continuity

Civil War: See Marvel Universe Events. Black Panther contributes to this event, but most of his action is contained to his own title. 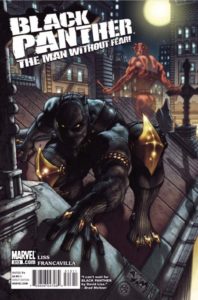 Shadowland: See Marvel Universe Events. Black Panther plays hardly any role in this event until Daredevil #512 and the “After the Fall” one-shot.

Black Panther: The Man Without Fear #519-524: Fear Itself
Also available in hardcover.

Klaws of the Panther #1-4
Stars Shuri as the Black Panther written by Jonathan Maberry. Also collected in Black Panther: Doomwar, above.

Avengers vs. X-Men: See Marvel Universe Events. Black Panther and Wakanda play a crucial rule in the middle portion of this event, appearing in the main series as well as tie-ins in Avengers. This critically alters the path of his story moving forward. 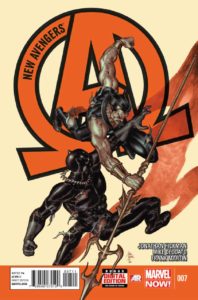 Black Panther is not a member of the core Avengers team, but his ongoing membership in the Illuminati finds him active in the New Avengers title as they try to repel incursions into Earth 616.

At points he is the primary protagonist of this series, and it contains all of his major development in this period. He also frequently appears in Avengers as the stories of the two books become more entwined. See The Avengers & New Avengers for collection information.

Black Panther also appears in a supporting capacity in:

Early Marvel Now appearances include: A+X #3 (in a team-up with Storm), Fantastic Four #1 (briefly, as an Illuminati member), and Wolverine and The X-Men #24 (briefly, in conversation with Storm)

Age of Ultron: See Marvel Universe Events. Black Panther is a supporting player in this time-travel tale, but it has no specific impact on his ongoing story.

Infinity: See Marvel Universe Events. Black Panther is a key player in the Earthbound story, but he appears relatively little in the main series (though his few scenes are pretty awesome). He is a more prominent player in Infinity: The Hunt #1-4 and Inhumanity #1-2.

Original Sin: See Marvel Universe Events. Black Panther is one of the featured players in this series. He also appears in Original Sins #5.

From Original Sin to the end of Marvel Now, other appearances include: All-New Invaders #8, Captain America, Vol. 5 #25, in Axis (very minor role), Nova #25 (non-speaking), Deadpool #45. I still have to research his further pre-Secret Wars appearances!

Marvel seems to have struck gold as they prepare Black Panther for his big screen debut with MacArthur Genius and National Book Award-winning writer Ta-Nehisi Coates penning this new series for at least the first 11 issues. He is joined by the legendary Brian Stelfreeze on art (alternating arcs with Chris Sprouse).

In this period, Black Panther also leads The Ultimates – see Mighty Avengers for details on collecting that title.

Rise Of The Black Panther (2018) #1-6
This mini-series is the Coates version of T’Challa’s origin, including his childhood and the rule of his father.

Black Panther: The Crew #1-6: We Are The Streets
This is stated to act as a prologue to Coates’s run.

Black Panther: Long Live The King (2017) #1-6
Originally released as a digital-only series on Comixology. As part of its tagline is “as the nation rebuilds after revolution,” it seems to fit into the period after Coates’s first mega-arc

Launched by Ta-Nehisi Coates and Daniel Acuña, this continues from: Black Panther (2017) #173 as well as scenes from Marvel Legacy #1 – where we learn that Wakanda has established an interstellar empire.

Shuri: The Search for Black Panther
Collects Shuri (2018) #1-5. While these issues were released after the first three issues of this Fresh Start relaunch series, they help to fill in the story gap left by it’s abrupt start across time and space.

Didn’t find what you were looking for?
Check Amazon for Marvel’s newest Black Panther titles.