DC has grown the Batman family considerable in the past few years, culminating with Batman actually franchising his bewingèd concept to bring all of his many imitators into the fold.

Once such Bat-hanger-on was Kate Kane, who debuted in 2006 as Batwoman. I’ve never heard or read a single thing about her, but the gorgeous cover of her DC relaunch comic caught my eye. A quick search revealed that artist J.H. Williams III notched not one but two prestigious Eisner awards for his Batwoman illustration thus far. The character also earned the 2010 GLAAD media award for Outstanding Comic Book, as penned by prior writer Greg Rucka.

Now accoladed artist Williams would be taking the writing reigns of this GBLT-friendly character in her first ongoing series. 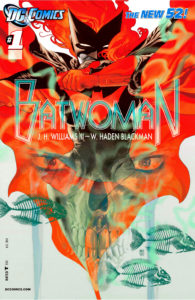 In a Line: “That was creepier than expected.”

Batwoman is one of the DC New 52 heroes with the shortest history, and I was sure that meant her book would be easy to pick up from scratch.

I was the best kind of wrong. Though Batwoman #1 introduces a new mystery, it trades heavily on a densely woven narrative that hints at a slew of backstory packed into just a few dozen prior appearances in the past five years. As a new reader I was left grasping at on panel cues. She’s a lesbian? Her house is a skyscraper built around a tree? She’s a colonel’s daughter? She wears a wig? 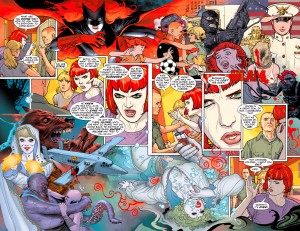 If it sounds confusing, it was, but only enough to warrant a close read – never are we left dangling without an explanation. It was also electrifying and terrific. I’m hard-pressed to name another recent comic that left me so hungry to read more about a character’s past and future. If I could spend $100 on Batwoman right now I would.

The artwork in this issue is unmatched. I’ve never seen anything like it. J.H. Williams III bucks both Jim Lee influences and the photorealism trend to present a style seemingly adjacent to art nouveau advertisements more than anything from a comic book. Think Mucha. His seemingly transgressive page layouts are incredibly intuitive. My eye went to the right place every time on page after page of spreads packed with images. Characters seem completely realized, ready and willing to leap from the page.

Batwoman’s every appearance on the page is arresting. Her bright red hair spilling over her mask to suggest a deep widow’s peak stands out on the page just as much as the gash of red lipstick does on her pale face. Her gray blue skin makes her look more like the drowned undead than her creepy foe in this story. Even in her civilian identity she looks like some fashionable zombie, perhaps fished from the wreck of the Titanic.

A mystery, a budding romance, a grumbling young partner, a government agency investigation, a proposition from Batman, and art that would look perfect next to the Absinthe Robette hanging in my kitchen? Sign me up for issue #2!