You are here: Home / Personal / off-topics / people / elise / How I Got My License AKA parallel parking is the mind-killer 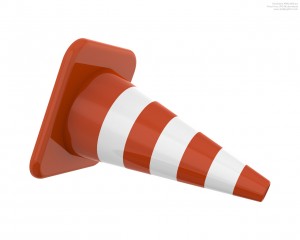 I couldn't find a picture to appropriately illustrate a "Philly Bump," so for the purposes of this story we'll just have to pretend that this is a traffic cone JUST AFTER being Philly bumped.

I don’t know how to make this post any funnier than that. My wife, Gina, Erika, and all of my co-workers have already received their entire quota of comedy content for a single post.

I suppose I should put in a little more effort for the benefit of everyone who hasn’t spent more than 40 hours a week with me at some point in their lives.

For someone so obsessed with adult things like having a budget and a house and a two-digit amount of two-piece suits, my inability to drive labeled me as an eternal adolescent. I need a chaperone to go anywhere. In every meeting or social event I am someone’s little brother. And not even a useful little brother who is under 21 so can always be the DD.

Thus, time for a license.

The driving test itself was much easier than I had anticipated. I had been studying for it as if it was an GRE-caliber of challenge instead of a drive around the block. E has been grading me on every stop and turn for the past six months. I parked for over six hours in the weeks leading up to the test – just parked and reparked, over and over again in front of our house (which has lead to the neighbors asking E some interesting questions).

While the grading might have been overboard, the over-parking –> was strictly necessary, as my sense of spacial relations is… let’s say, “vestigial.”

More accurately, when the car is backing up I don’t seem to think there is any relation between where the back of the car is pointed and what I do with the wheel. So parallel parking is really exciting, like one of those carnival rides where the teacup can turn in any direction at any second. 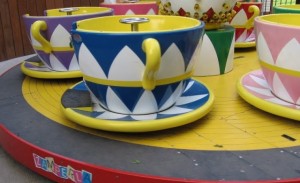 You know how in the teacup there's the little center wheel, and everyone in the teacup futilely attempts to steer it against the gravitational forces at play, ultimately spinning directionless for the entire two minute duration of the ride? That's what parking is like for me.

It was all for naught.

The method? Mindless repetition until I have made up my own special Peter’s Guide To Parallel Parking that has no bearing whatsoever on the actual parallel parking process. You know how on Friends Phoebe doesn’t know the names of any guitar chords, instead calling them things like “bear claw” and “old lady”?

It starts with me repeating, “slow, deliberate, and strategic” over and over, which is like my parallel parking equivalent of reciting “I must not fear. Fear is the mind-killer,” until the parking has gone and only I remain.

Then there are a series of arcane calculations about wheel turns and the relative size of the curb in my rear view mirror. Then I park again. And again. We’re talking hours of nothing but parking.

Did I mention how incredibly patient my wife is?

I was reciting my parking mantra carefully under my breath on Saturday morning as my tester approached the vehicle, pausing only long enough to learn his name. Burt. Like Burt and Ernie. But probably don’t point that out to him. 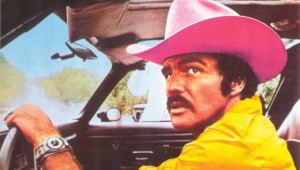 Also not my test-taker. Actually, he was a lot more reminscent of the Muppet.

I managed not to break any traffic laws in the actual DMV parking lot (which I had been doing with great aplomb prior to the start of the test) and then we were at THE SPOT.

People had told me really encouraging things about how the parking spot would be big. Quite large. Rotund. They were fucking liars. The spot was tiny. I saw at least two people ahead of us in line fail just on the parallel parking. I was a little concerned it wasn’t even as long as our car.

When we reached the spot I went into my parallel parking Rain Man routine hardcore, hoping that Burt would be more afraid for his life from my behavior than from my actual backwards navigation abilities. He carefully instructed me that I had three “reverses of the vehicle” and then maybe retreated as far to the passenger side window as possible.

I restarted the mantra.

And then I parked perfectly in one move.

Just for fun I asked Burt if I should use a second move to give the orange cones a “Philly bump.”