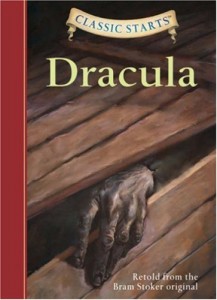 The first book I ever read was a children's version of Dracula, so I'm sure you can understand if I find all this Twilight business to be a bit annoying.

I think vampires could possibly be on their way to wane. It’s hard for me to be sure, as I am generally oblivious to their ebbing in and out of favor, having loved them since age six.

Age six was when I read my first book as I sit on my front porch in the summer sun. That book was Bram Stoker’s Dracula.

Seriously. It was an abridged version for kids, and the few extremely terrifying dreams that I still remember were a small price to pay for a lifelong love of reading.

By the time of my reading of Dracula I was already an established David Bowie fan, so please understand that (a) I was not your typical six-year-old, and (b) I might have loved 1983’s The Hunger even more at age six than I did this weekend. 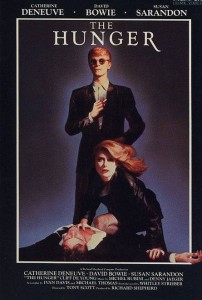 As opposed to his stunt-casting in many films, David Bowie is actually the perfect person to play this character.

Have you heard of this movie? It’s insane. From a novel of the same name

, it’s like a retroactive Lynchian remake of Black Swan with literal vampires instead of metaphorical birds, where David Bowie and Susan Sarandon split Portman’s part (complete with homoerotic touches), but replace her ballet dancing with cello playing and smoking cigarettes, respectively.

The Hunger is exactly as disorienting, awesome, and disturbing as that description suggests.

In one of his strongest cinematic turns, David Bowie plays an androgynous vampire musician who is a little touchy about getting older – so, essentially, he is playing himself. Catherine Deneuve is his sire and very long-term domestic partner, as well as a sex enthusiast and classical pianist who is a dead ringer for Lady Gaga.

As the pair begin to fret over Bowie’s gray hairs, they independently obsess over Susan Sarandon, a young doctor trying to unlock the secret of aging by experimenting on some very temperamental monkeys. When the two of them aren’t busy fucking and killing (usually in that order, but not exclusively) the swingers they pick up from the local goth club they teach music to an adorable neighbor girl.

This movie … words just fail me. From the first minute it’s both disgusting and gorgeous. It’s beautifully sparse, with lingering shots that made me gasp and short, clipped dialog that’s hardly necessary. Honestly, it would work almost as well as a silent film. Unlike a lot of movies from the early eighties, it does not feel dated to me – the only hints of its age are electronic music cues and perhaps an overuse of slow motion.

Most importantly, every time The Hunger reached a point where E and I exclaimed “wouldn’t it be awesome if x” or “surely they’re not going to x” that exact thing happened. We’re talking about three of the most transgressive plot twists I have seen on film outside of shock/horror movie.

I mean – yes, this was shocking and horrifying – but on the whole it was more of a sexually-charged arthouse flick than it was Saw.

Did I mention David Bowie AS A CELLO-PLAYING VAMPIRE? Oh, and, if I may be a total dude for a brief moment (maybe the first ever on CK): the breasts of a young Susan Sarandon.