You are here: Home / Personal / topics / thoughts / Ride or Be Thrown

Life keeps happening, even after I dig in my heels and insist it is not going to happen anymore, and won’t it just hold still for a second while I catch up on sleep or even take a minute to fix that weird thing my hair keeps doing.

It’s a stubborn beast, life. Like some sort of angry bull you can try all you want to wrangle and ride, but will ultimately head in the direction it was planning to head before you ever climbed aboard. 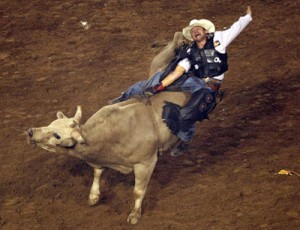 Yep, that about sums it up.

Which begs the question – couldn’t you just ride a cow instead?

(I actually asked someone that this weekend. Are there riding cows? Or, if someone sits on their backs do their udders drag on the ground getting snagged on rocks and stuff? This is how little I know about the natural world.)

(In the same conversation we decided my autobiography would be entitled, Flowers are Bullshit, which I think is an accurate depiction of both my general ignorance of the natural world as well as my aforementioned naïve and/or stubborn attempts to wrangle the non-cow of life in any direction that suits me.)

This past month the raging bull of life has been on a rampage. Actually, it’s been a sort of a bull fight as we’ve intersected with other lives along the way. We reconnected with forgotten friends, gained an unexpected roommate, and admitted that both our house and band situations are permanent fixtures in our lives so it was time to start treating them that way.

We can get so ensconced in our own wrangling that it becomes easy to forget that people we casually summarize or dismiss have their own rodeo of life to wrangle outside of our peripheral vision.

I feel like E and I have largely been in our own rodeo for this first year of the house. Sure, we worked, rehearsed, and showed up for a requisite amount of dinners and shows with our friends. Yet all of that was a part of our own narrative, our own bull ride. We never got in too deep with anyone else. We were busy wrangling and trying not to get thrown. 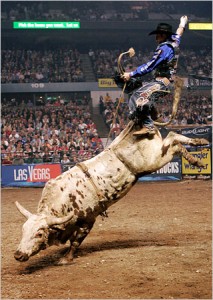 At point in the last two weeks my stomach has actually felt like this - meaning either that I felt like I was going through it at the time, or it was happening INSIDE OF my stomach.

Well, these past few weeks we got deep. Bulls have locked horns.

Last Wednesday we went to dinner with a friend we’ve literally never hung out with one on one. I’ve known him for twelve years! Yet, this was the first time we sat together at a table together and traded stories over dinner. Did we know he remodeled his kitchen from the floor to the rafters at the same time he built the new South Street Bridge? Um, that seems like something we couldn’t help but know, yet we didn’t.

Two Wednesdays ago we got a call from E’s brother, four days out of his Freshman year of college. Could he stay with us? Like, for the weekend, right? No, actually, he had to move back to Philly because he landed a job counseling a theatre camp for the summer. Oh, and an understudy role at the oldest theatre in the country.

Arguably the one person E and I make the most effort to keep up with, and we had no idea he had a job, an audition, and a need to camp on the futon in Arcati Crisis studios.

So here I am, fresh from setting up our new PA system, rehearsing, dining out in Manayunk, playing a show in Manayunk, replotting the wiring of Arcati Crisis studios, rehearsing more, attending (and playing) a wedding, driving 150 miles in a single day, reorganizing Arcati Crisis studios slash our brother’s bedroom, and conducting nightly three-hour Rock Band 3 harmony singing sessions – and heading into another dinner in Manayunk, more rehearsals, recording my first new solo tracks in a year-and-a-half, and more (likely including more nightly Rock Band 3 in harmony mode, because I don’t have a harmony-singing little brother living in our recording studio all the time – just for the summer).

Try not to get thrown.