Every week Marvel puts out graphic novels collection recent and classic comics. It’s a much cheaper and easier way to follow comic books than chasing down single issues (now $3-4 each!)

This week is light on X-Collections, though Marvel has a bevy of other books out.

As always, get the full scoop on every X-Men book collection ever in my Definitive Guide to Collection X-Men in Graphic Novels, which tells you how you can buy any X-issue ever printed. Also, if you’re just an X-Men dabbler, head over to my recent Intro to X-Men (on a budget) post. 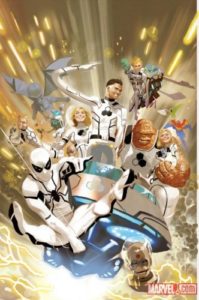 CK Says: Buy it! It’s pretty rare to see a non-X-men recommendation at the top of my list, but this is a high quality comic. Fresh off of four volumes of incredible, must-read adventures, scripter Jonathan Hickman has transported Marvel’s first family to the top of the A-list of superheroes. Starting with Reed Richard’s compuction to solve all the world’s problems, the team was tipped on it’s ear – Reed saw his alternate-reality selves get slaughtered, Sue became a regent, Ben got to spend a day each month as a human, and  Johnny had to defend the residents of the Baxter Building against certain death. All the while, four cities of otherworldly humanoids declared war on each other, and on the team!

And that’s just a fraction of the insanity of the past 20 issues! Time travel! Cloning! Death!

FF is the result of all of that action. It’s not short for “Fantastic Four,” but for “Future Foundation” – what Mr. Fantastic coins the collection of refugee super-geniuses currently living in the Baxter Building. That means the comic is no longer just about four people in blue spandex. First of all, now they’re in pristine white spandex. And Spider-Man is on the team. But the new heart of the book isn’t Mr. Parker. It’s an expanded supporting cast – the Future Foundation made up of a dozen interesting characters. My favorite is Reed & Sue’s preternaturally genius pre-schooler, Valeria, who occasionally hatches troublesome plots with her god-father, Dr. Doom. 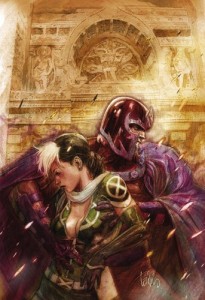 CK Says: Buy it! X-Men Legacy has been on a roll since before Second Coming to present. Here Mike Carey detours from the angst of Utopia for a road trip to India with Rogue, Magneto, and a handful of former X-Men Academy students. Add to that Children of the Vault – the only quality X-Villains debuted in the past half decade (by Carey) – and you have an inessential-but-enjoyable four-issue arc that doesn’t require too much advance reading. That it includes beautiful, painterly covers with interiors penciled by outstanding fan-favorite artist Clay Mann only makes the read more fun. (Also available in hardcover)

Keep reading for a summary of the rest of the books out from Marvel this week, including a street-level brawl headlined by Daredevil.

Carnage: Family Feud Hardcover (Hardcover) – Collects 2011’s Carnage #1-5. Presently 40% off at Amazon! Though I’m only a moderate Spidey-and-family fan, the combo of Zeb Wells (of recent New Mutants) and Clayton Crain (of X-Force, Vol. 3) probably makes for an incredible book. I might have to pick this up.

Shadowland TPB – Collects Shadowland #1-5 and material from X-Men: Curse of the Mutants Spotlight. Not especially recommended by Marvel fans, but it’s rare that Daredevil and the other street-level heroes front their own event. (Also available in hardcover)

Shadowland: Thunderbolts TPB – Collects Thunderbolts #148-151 (or 153?). See what Juggernaut was up to directly preceding his appearances in Fear Itself. (Also available in hardcover)