Comics have been cashing on on vampires since long before Twilight, Buffy the Vampire Slayer, or even Interview with the Vampire.

When interest in super-hero comics began to decline after World War II (and was further assaulted by Frederick Wertham) horror magazines were part of what kept the medium alive. Even after horror comics were censured by the Comics Code, classic monsters still turned up in comic plots.

Marvel’s 1970s title Tomb of Dracula was a mammoth soap operatic battle between Dracula and a bevy of would-be slayers. The 90s brought indie babe Vampirella to popularity, an Elvira-esque busty vampiress.

Marvel and DC have been dipping their toes back into blood for the past few years to see if the time is right to re-capitalize on vampire stories, but neither has quite struck gold. Has the fanged moment passed, in favor of the suddenly hip zombie movement of the past few years? Who knows, but DC and Marvel are both launching a new vampire ongoing this fall to find out. 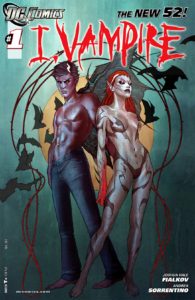 In a Line: “Normally I’d lock you away somewhere until I could find your sire. But, well, y’know…”

I, Vampire #1 is like Twilight written by Anne Rice, disposing of the sappy pursuit of undead teenage love and focusing on the eventual bitter fallout – and how the results can be deadly in the form of a 400-year-old scorned lover who wants to take back the night (and the entire human race) from a plague of superhero do-gooders. 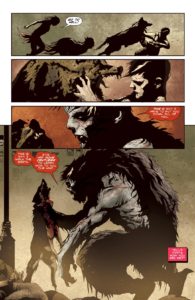 I know that vampires aren’t for everyone, and even the people they ARE for might be a little tired of them after the past few years. That doesn’t change the fact that Joshua Hale Fialkov delivers on both gore and romance as he kickstarts this story from square one.

We get modern day vamp-on-vamp violence of race-traitor Andrew as his vampire slaying is narrated by his recent break with lover Mary. Andrew and Mary have already done the star-crossed thing, and the immortal lovers thing, and now they’re at the point of an ideological divide. Their debate? If you could be a young beautiful superhuman every night for the rest of your life would you content yourself with drinking cow’s blood and working the night shift forever, or would you rather try to take over the world from the masked men who have brightened its corners?

Yeah, it’s a little more complicated than your typical lover’s quarrel, and it has terrifying ramifications for the warm-blooded population of America. 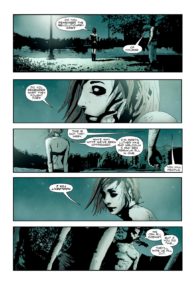 Try to get past the twinkling nearly-nude hot bodies on the cover, which are probably keeping some readers who would dig this title at a distance. The interior art is the ash-colored world of a war comic or Walking Dead, bringing a bombed-out look to Boston at night – where the rubble is a heap of discarded bodies. Despite the loverly narration, we get hints that Andrew is going to be an acerbic post-Whedon anti-hero as he apologizes to fresh vamps for staking them.

The conversational narration has some moments of melodrama, but I felt like they were defused by the illustrations they hovered over. I’m duly impressed with artist Andrea Sorrentino. In the present we have Andrew’s grim vampire hunt through a tangle of limbs. In the past we have a romantic moonlit night that bears the same heavy shadows as the terrifying street scene. Sorrentino likes to draw some horror and revenge into love, Lady Gaga style.

I wasn’t expecting much from this fanged title in DC’s relaunch, but it wound up as one of my favorite books. Whether it’s superheroes or vampires, there is delight in finding a fresh spin on an old story, and I think Fialkov and Sorrentino succeed in this first issue. Yes, reluctant vampires and blood-thirsty lovers have been done before, but not in a superhero universe and not with this tone. It will be interesting to see where they head without the narrative frame they use to keep this one standing, but this bad romance is worth a read.