I hear newly released music via a four-point scale of acquisition.

1. Appointment. I know I love an artist. I know their LP is coming out. I pre-order it.

2. Recognition. I’m aware of an artist, who I might even like, or I hear a song on the radio that I enjoy. I see their name on a release schedule or in a review. I pick up their newest stuff.

3. Guided. A trusted source or a plurality of untrusted sources recommend an artist or album. Alternately, I hear the song enough times to be interested (which, given my lack of radio-listening or television watching, is pretty rare).

4. Acquisition. I am looking for new music in bulk to hear/review and pick an LP based on non-arbitrary factors like reviews by people I trust, how good the third song is, and how cool the LP cover looks. 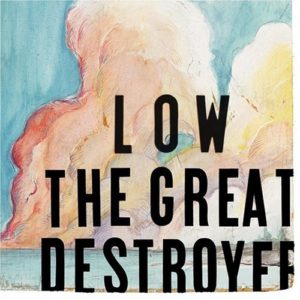 Low is an example of a band who has moved up the strata year by year. They are presently somewhere around 1.5 on the scale.

It started with Low’s album The Great Destroyer. I had vaguely heard of the band, but though they were shoegaze or slowcore or something else that bores me to tears, so had avoided them until that point (i.e., they failed the #3 test). However, The Great Destroyer had a fantastic name and album cover (#4 sometimes saves me from snobbery in #3),  so I picked it up and wound up loving it. It was a little slow and gazey, but it also featured distinct counter-melodies and witty lyrics.

Fast forward five years, a period in which I picked up no further Low releases. Midway through 2011 I saw Low’s name on the LP C’mon and picked it up purely out of curiosity. Would it sound like Destroyer, or was that merely a catchy outlier?

“Try To Sleep” is the first track and lead single from that album, and without a doubt one of my ten favorites songs of 2011.

(Watch “Try to Sleep” on YouTube. Buy it on Amazon.)

I forget what I was doing when I first heard this song, but I remember making a mad dash for my iPod to see who was singing it so I could rate it five stars. I was surprised that it was Low – while it’s only a minor modification on their typical sparseness, it’s also incredibly pretty.

There are so many compelling factors about this song. First, the dead simple arpeggiated riff that drives it. This is songwriting you can do in your sleep. However, dressing it up acoustic guitar with a chiming xylophone(?) part makes it distinct. Follow that with a plaintive, earnest, imperfect delivery from singer Alan Sparhawk, topped by incandescent line of constant, wide, sighing harmony from drummer Mimi Parker (who later adds simple, effective “ahs”).

Then we arrive at the point that really sells the song. The arrangement stutters on a single chord as Alan implores us twice to try to sleep, and then it blossoms back to the arpeggio. After the slight stutter the endlessly repeated riff sounds revelatory – big and new, and topped with he peculiar line, “Don’t look at the camera.”

Who sleeps on camera? It’s weird and slightly creepy. Yet, we only have a second to contemplate, because before we can sink into the standard progression the song stutters once again, before sending us back to the riff.

It’s a wonderful play on anticipation, and it makes the song much more interesting than if it simply churned through the chord progression without a break.

Also, John Stamos is in the video.