You are here: Home / Personal / topics / high school / we’ll see how brave you are

Over the past few months I have been trading a volley of emails with the unrequited crush of my high school life.

(Alright, settle down. This is not an intellectual affair of any sort. E is totally in-the-know about this entire saga. But, as you’ll see, there is still some resonance there.) 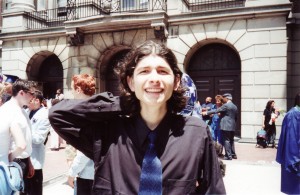 Seriously, how cute was I back then? So cute.

Being the unrequited crush of my high school life, she was effectively and simply one of my best friends. In fact, I’d say she was the person I spent the most time with in high school after Gina. Since high school was also ground zero for establishing my taste in music, the entire half of my sonic vocabulary that I don’t share with Gina – Elliott Smith, Rufus Wainwright, Tori Amos –  I do share with her.

(This pronoun business is getting tired already. In the proud and rarely-invoked CK tradition of assigning cursory pseudonyms to former obsessions to pseudo-protect their anonymity and separate them from posts made while I was actually in some form of crush with them, we shall refer to her as “Scarlett.”)

As with all of the few people who have fallen out with me (rather than the other way around), Scarlett’s story became a little too intertwined with mine. I found myself telling everyone I knew about parts of her life that were maybe not mine to tell, either intentionally or through my songs. Except, Philly is a small place, and she eventually told me it wasn’t the kindest thing to do to a girl.

We didn’t have a fight, necessarily, but we left it there, and eventually became Facebook friends, as one does in these situations.

I am not one to harbor regrets, but I regret that. How could she have known what she was getting into by being my friend? Fifteen songs which are now sitting in mothballs in some attic crawlspace of my brain.

(Yes, I do appreciate the irony inherent in now writing about her on my blog. I suppose this is one of my fatal personality flaws.)

Our renewed contact began because, oddly enough, Scarlett has out-of-the blue discovered a love of singing. And, let me tell you, this was a girl that had no interest in singing. You know me and my constant need to turn everyone into an all-singing, all-dancing cabaret version of themselves. I tried that on her in high school, and maybe had something to do with getting her to act in a play with me, but the singing part never came.

Suddenly, in 2011 she was interested in singing and playing, so she emailed me. I suppose I am the stock person that comes to mind when anything of the sort crosses the mind of anyone who has ever met me. Which is good – +1 to personal branding!

Anyhow, we talked, and then she sent me a recording of her singing. Though untrained, she has this wildly cool voice – as well as the instincts and DNA that come from all that music we shared in high school. A few days later I sent the song back with an instrumental arrangement and a choir of ahh-ing auto-tuned Peter’s.

Things have continued like this for a while now, her sending me new songs, us talking about the mechanics of singing, me musing random musings back at her.

Last week I finished a new song I have been chipping away at for – no lie – two years. I had played it for E a few times while working on it, but when I was finally done it was past midnight and I needed to play it for real for someone so I would remember it in the morning.

I recorded a video and sent it to Scarlett. It’s the first song I can remember sending to her or playing for her for over 12 years, even though back when I first learned to play guitar it was the sort of thing I did whenever I finished anything. “Sweet Nothing,” “Other Plans,” “Touch” – all those old ones, she was one of the first people to hear them as a file shared over instant messenger.

And now, in a way, we have transported ourselves back to our instant messages of 1998, firing our volleys of thoughts and songs across the city at each other.

I want her to be the biggest indie star in Philly, because even if I stop having a crush on someone I am still in love with all of their potential.