I had a plan of high efficiency for this past weekend. Novel-editing. Blog-writing. Track-mixing. Song-arranging.

Note a common theme: all my object-verbing centered around computing power, which made it the most awesome possible time for my laptop to have a complete meltdown.

So, of course, it had one. Followed soon thereafter by a complete productivity meltdown as I desperately shopped for a new laptop. 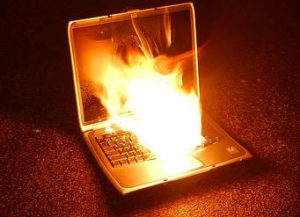 This image is a dramatization of the actual events of this past weekend.

Why do these things have to be so hard? My specifications, they are specific: Less than 13″ wide, less than 4lbs. More than a 2.3 GHz dual core. 8GB or more max RAM that’s user-installable. Not completely bloated with helpful programs I will never use. DVD-drive not required, but accepted. HD ideally replaceable with a solid-state version in a few months as prices come down. Under $1k. Bonus points for fun colors. Points lost for systemic issues pointed out by over a dozen one-star reviews on Amazon.

Okay, it’s not the simplest list of demands, but they’re a list! A very defined list. So why, why, WHY, was it an impossibility to find the laptop that fit? Shouldn’t there be entire websites – nay, entire cottage industries dedicated to solving this particular, very specific need of mine?

Well, there are. Sortof. There are cottage “laptop-to-spec” websites, but we’re talking >$2k for a custom-built laptop. They are for serious gamers and, like, Angelina Jolie in Hackers. CNET reviews every possible laptop, but the reviews are either immediately outdated or the laptop they endorse is nowhere to be found for sale.

(HP offers a pretty sweet set of customized builds on their website but, well – they’re HP. I’ve had several long-living PCs from HP, but there is no denying they are the king of bloat.)

The worst part? It’s not as though my laptop emergency came as a surprise, but even with a few weeks of prep time I was still paralyzed by dozens of shitty choices.

My battered blue netbook is now in year-three of its lifespan, and it has been through the wringer with me. I have worked with it in the crook of my arm on elevators and highways and in subway cars and rainstorms. Last year the original charger died, and it took three tries to find one that would work. A chunk of the faux-metal trim fell off, leaving a gaping hole in the front corner. Then my arrow keys stopping clacking, and removing them from the keyboard to try to solve the problem proved disastrous. The screen flickers dangerously any time my body accumulates the slightest bit of static charge. Sometimes it simply shuts off.

Still, it runs, it browses the internet, it edits my novel. What more did I need, really?

On Saturday, even more keys began to give up the ghost. The left-hand shift began randomly firing, creating CrAZEd SCreEds out of my every email. Then it died entirely (which was preferable), with the Backspace key seemingly next to follow. And, boy, let me tell you, if you are going to have one randomly-firing key, Backspace could be the worst possible option.

The result was about 36 hours of close to zero productivity as I cried about not being able to edit my novel and poked at seemingly every laptop spec on the entire internet. Should I cave and get a Mac Air like E, even though I find it unwieldy? Should I cave and get another super-cheap netbook for $300, even if it has the same exact specs as my three-year old version? Should I cave and build a custom HP that would take three weeks to arrive and at least another week to declutter?

As you read this post I am in possession of a brand new Toshiba Protégé R835-P94. CNET reviewed the series well and it fit all my requirements, though I had to hunt down the actual spec sheet to prove it. I’m not endorsing it yet (kinda huge and plasticy), but if you are also looking for a powerful portable, I’d suggest you throw it into the mix.

Hours spent actively shopping? At least 24. Actual credible options that fit my specs? Just this one (plus a similar HP, which I eschewed).